Happy February - or should I say "Happy ACW-ruary!"  That's right, it's officially "ACW Month" if we're following the SOUND OFFICERS CALL gaming and painting schedule.  Games this month should be ACW games and the painting priorities "should" be SYW.  January saw a host of fun World War II games and blog posts along with plenty of WWII and ACW painting.
This month I'm keen to bring out some ACW rules including Mr Neil Thomas' ACW rules from Wargaming: An Introduction and Ken, Dave, and I have a game of Altar of Freedom planned - this time we'll be refighting Shiloh in glorious 10mm!
PanzerBlitz in Miniature 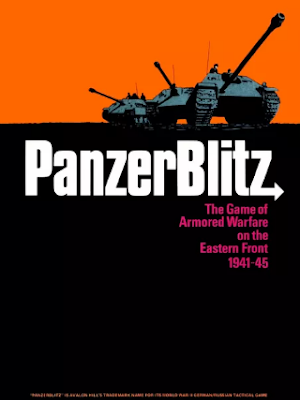 But before I get into anything on the ACW festivities planned for February, tell me if this one has ever happened to you.  I wanted to finish WWII month out with a larger battle where stands = a platoon.  There are lots of choices but me being me, I had a brilliant idea to try and convert Panzerblitz, one of my college go-to favorites on Friday nights (yes my life was that exciting) to a miniatures game.  I turned to Google.
Here is what came up when I searched "Panzerblitz in miniature":

Did you do a double take like I did?  Did you happen to notice 4 of those URLs were from SOUND OFFICERS CALL?  And with the old wood paneled basement!  I had to check it out.  The Google Time-Machine took me back to the days of 2014 when I had, apparently, played a game of PanzerBlitz in Miniature with Mr. Dan Fraser's (Canuck Commander) PanzerBlitz in miniature variant, and then promptly forgot about it.
The game had lots of toys you see now on the table and looked like it was alot of fun.  Anyways, I've resolved to try it again and will definitely blog about it.  But I did have to laugh at my forgetfulness.  So if you're wondering about a rules concept or how a game plays, put it to Google - chances are you may have played it already...
ACW-ruary
February has started off strong on the hobby front with 3 more Regiments marching off of the parade yard and getting themselves ready for Shiloh with Greg Wagman's Altar of Freedom rules (yes, I'm quite sure I played those a year ago :)
Other rules I want to play this month are Black Powder ACW with the Glory Hallelujah supplement, Norm's "Two Flags, One Nation" rules, and Mr Neil Thomas' ACW rules from Wargaming: An Introduction.  An ambitious plan, but I can tell you that Shiloh with AoF is a must, and Black Powder is a must. I also have 4 more 10mm Infantry Brigades to paint in preparation for Shiloh.  The other games will be played in 15mm.
Of late I've been finishing up caulk roads for Shiloh as well as a few other painting projects in support of ACW month. 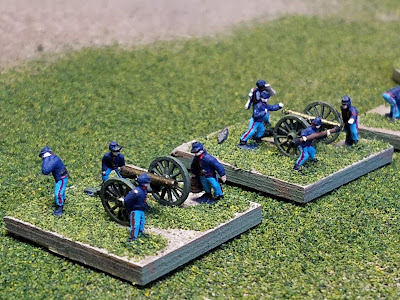 Well that's it.  If I can slip away, I want to retire to the gaming bunker and play a quick game of Neil Thomas' ACW rules.  Stay tuned!
Posted by Disgruntled Fusilier at 5:14 PM