The Battle of Cheriton 1644: In Deo Veritas - First Thoughts! 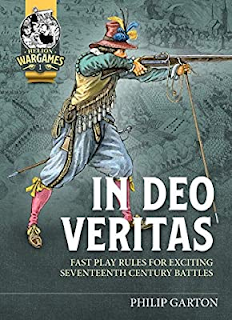 Ken and I sat down on Saturday to play our first game of In Deo Veritas 17th century rules from Helion Wargames.  We picked a smallish ECW battle from the IDV rulebook (Battle of Cheriton) as Ken has a nice-sized (and beautifully painted) collection of 28mm ECW miniatures, and we thought this would be a good introductory scenario with a manageable number of combatants.

As most of you probably know already, In Deo Veritas are a 17th Century "big battle" set of rules that dispense with and abstract some detail for the sake of playability and aim to put entire 17th century battles on the table.  If you've read this blog for any amount of time, you know that I am a huge fan of "big battle" rules and usually aim to put historical battles on the table as much as I can, so the premise of IDV instantly appealed to me.

Reading Darren's review of them really sealed the deal for me as I found out they were inspired by, and even structured a bit like Frank Chadwick's "Volley & Bayonet" which are some of my favorite "big battle" rules for the horse and musket era.

The rules and the sequence of play are straightforward enough that you can get into the action quickly, and there is a great card-driven activation system to activate "wings" on the table.  This gives you just enough random activation to add some nice tension and fog of war to the game.

The sequence of play is familiar with movement, combat, and adjudication of morale issues occurring in that order.  I should also say that, like Volley & Bayonet, the movement distances are quite generous.  Units, at least later TYW and ECW units, are 3" x 1.5".  That should sound instantly familiar to V&B players!


My plan is to use the right wings to keep the Royalists bottled up.  True to the "hammer and tongs" nature of 17th Century Warfare (what little i know about it), I want to strike hard with my cavalry and follow up with my infantry, eager to make contact.  Ken and I also have large cavalry wings facing off across the field on my left, Ken's right and a huge cavalry battle is in the making as both of us place our forces on "attack" orders.  I like the orders system and they seem intuitive in this case.  The orders also add a nice "fog of war" to the system as I found my right wing cavalry in a "pickle" as I had them on attack orders and not much range to work with!  As a result, with much of my cavalry being engaged, I had to charge a unit of horse straight into a Pike and Shot brigade frontally with telling consequences.  Even a 17th Century "newb" like me knows that's not going to end well!

Ken and I had some questions during our play through that we couldn't find answers for in the book - for instance when charging do you square up against an opponent?  Is it the point of contact?  Can chargers fire?  Additionally we took some generous "artistic license" with assigning supports for our combats as support ranges weren't defined that we could see.

One cool feature also of IDV is the disorder system and testing when in proximity to the enemy (again, familiar to V&B players).  This actually enables the enemy's saves which I like.  The combats themselves are simple affairs and the modifiers are manageable.

Ken and I decided to reset the battle after turn 5.  I had made some initial deployment mistakes not knowing or appreciating the orders restrictions or the move distances.  My cavalry on the right got embroiled in a nasty fight with Ken's supporting Pike and Shot infantry and his Cavalry.  My characteristic bad rolling also plagued me throughout the entire game and I rolled plenty of "1"s at very inopportune times!  We'll refight the battle.  Hopefully my copy arrives in the mail soon so I can get even more familiar with the rules. 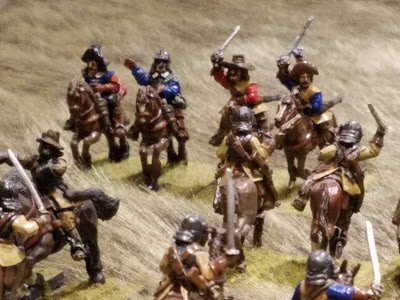 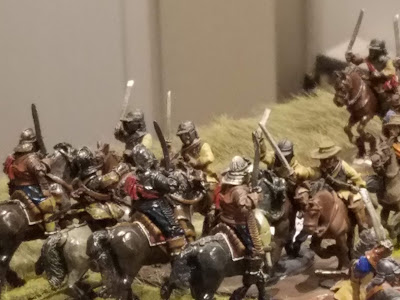 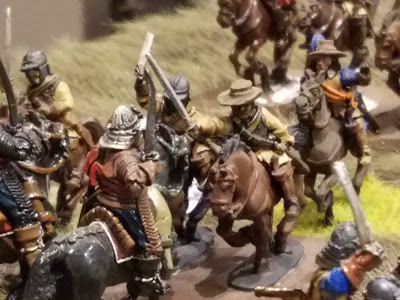 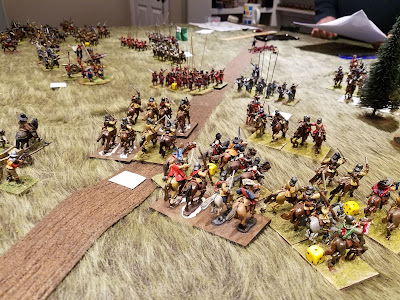 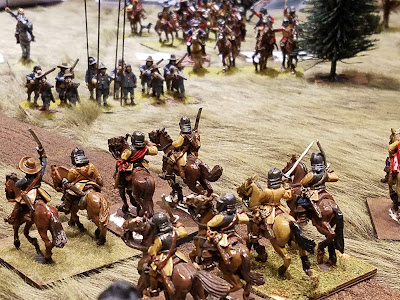 Thoughts on In Deo Veritas
I enjoyed these rules and felt these are a good introduction to the period and allow me to better appreciate the contribution of each combat arm to the battlefield.
I am happy to report that the rules are "loose" enough to allow you to form a plan, and then fight it out, with the enemy naturally getting a vote.  They are straightforward and not at all "gimmicky" in the sense that you will be moving your troops, just not necessarily in the order that you might like.  I learned what I needed to learn by turn 2.  Originally I was going to base my ECW figures on 4 x 2" unit stands, but will instead mount them on 3 x 1.5 inch unit stands moving forward.  I am looking forward to playing IDV again, and frankly, they make me want to play Volley & Bayonet again!
Surprisingly I also played Tilly's Very Bad Day this week and enjoyed those, too.  So you could say this week has been a "crash course" in 17th Century warfare here at Sound Officers Call!

Email ThisBlogThis!Share to TwitterShare to FacebookShare to Pinterest
Labels: Battle of Cheriton, ECW, In Deo Veritas