About 2 years ago (!) I posted on the outstanding potential for the rules and scenarios hosted on the Junior General site, which is a site that began as a resource for history teachers to teach their students about history through wargaming.  The simple-but-not-simplistic rules hosted on the site are wonderful, and even inspired Steven Thomas to publish the excellent "Tilly's Very Bad Day" Thirty Years War (TYW) rules.  Both of which are excellent additions to the "Allure of Simple Wargaming" experiment in their own right!

Fast forward to present day, I recently got the chance to put Tilly's Very Bad Day (TBD) through its paces on my own wargaming table, albeit with MDF counters instead of miniatures (All of my ECW miniatures are yet unpainted).  I enjoyed it immensely.  TBD was a wonderful game and I immediately turned to the Junior General rules to have another look at its massive stable of rules and scenarios.  (I plan on doing a post on TYW rules as I have a TYW game scheduled with Ken to try In Deo Veritas).

Looking at the splendid additions Steven put into his TYW work, I wondered what kinds of additions one could add to the Junior General Horse & Musket era rules to make them as exciting and fun as TBD?  First I had to play a game straight out of the box and see how it went.  This being ACW month here at SOUND OFFICERS CALL, I figured - why not try the rules from the Little Round Top scenario?

I laid out some dense, ACW styled terrain consisting of 2 large farmsteads - the Smith Farm, and the Widow Freitag's Farm.  This battle would be a completely even meeting engagement consisting of a Division on both sides, each with 2 Brigades of 4 Regiments and an attached Artillery battery.  Rather than use number of gun models, I used crew castings to represent the number of guns.
This was to be a meeting engagement and the forces would arrive randomly with a D6 roll per turn, allowing selection of a Regiment, Battery, or Commander (in the Junior General rules, as in Tilly's Bad Day, commanders are extremely useful).

The terrain was neat and totally unintentional.  The Smith Farm held a huge open area surrounded by a fence or woods.  To advance into would invite fire from all sides.  Both sides accordingly overwatched the farmstead but chose to advance down the flanks.  Movement is generous at 6" for line and 12" for column.  All obstructions cost 1/2 movement.  Units may move and shoot.  More on this in a bit.


Sensing an opportunity to crush the Yankees before they can mass, the Rebel Division Commander sends the second brigade, 4 regiments, down the left flank and through the cornfield.  The copse of woods at the other side is their intended target. 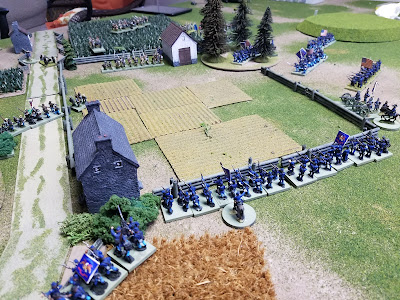 I really like the shooting rules - which are by stand.  When you lose a stand, you lose a shooting die.  The JG rules have the ACW units at 6 stands.  I made mine 5.  Tilly's Bad Day uses a system called "resolve" to represent what the individual bases represent in the JG rules.  I liked this and borrowed it for this battle (and everyone knows my preference for single-unit stands).

Instead of removing stands, I just used a dice to represent "stand loss". These rifle-armed Regiments hit on a "6" at 12" except when shooting closing fire against chargers, in which case they hit on a 5+.

Units move and shoot, which is incredibly high-octane, but I love it.  Developing an attack is not as challenging and the infantry units feel very powerful.  Probably how it should feel for an ACW battle.  Tilly's Bad Day, really the inspiration for fighting this battle, uses a turn sequence where the Phasing Player moves, and the Reactive Player fires.  I like that because it's chock full of decision making, however for this battle I played as-is because I wanted to get the feel of the rules first.

The fight on both flanks is heating up.  The battle on the Union left for control of the hill is not going the UNion's way as the Rebels bring up reinforcing Regiments to capture the hill.  THe first Rebel Regiment charges in and is badly mauled by fire in the woods.  On the Union right, a Regiment emerges from the pine forest to the edge of a cornfield where a Rebel Regiment, its colors blazing in the chest high corn, greets it.

I love how the pre charge sequence works in the JG and Tilly rules.  You must roll your number of remaining stands, or less, on a 1D6.  So say if a unit has 4 stands (or in this case strength points) remaining, they must roll a 4 or less for their morale.  If they have 2 stands or SPs remaining, they must roll a 2 or less.  Commanders can influence this die roll by a factor of a single stand.  The Union on the right, seeing an opportunity to charge, roll their pre charge morale check.  They are full strength with 5 stands, meaning a 5 or less is needed.  The roll a 6!  Of all the times to roll a 6, now was not the time! 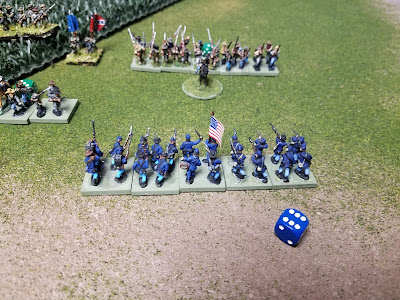 The Union aren't as unlucky in other spots of melee and next to the stay-put Union Regiment, another Union unit passes its charge test.  Their target, a Rebel unit with 2 stands lost, fails and withdraws 12" taking another stand loss.  I added a rule, borrowed from the Tilly rules, where each unit they retreat through take a morale test.  If they fail, they lose a stand!

The fighting is gradually going the Rebels' way as the Union give ground on both flanks, withdrawing to consolidate their line.  The Rebels have lost 2 Regiments, the Union have lost 1 so far in heavy fighting.  The Yanks give ground at the Smith Farm and slowly move back towards the safety of their fenceline.  They shoot at the advancing Rebs rolling 3 sixes!  OUCH!  I made an ruling that any unit rolling 3 or more "6s" had to take an ammo test and if they roll a "1" on their ammo test, they're low on ammo.  (if you've ever played Johnny Reb you remember that rule!).  I'm calling it the "crushing fire" rule based on a quote I read from a NC Confederate officer at Gettysburg advancing against a stone wall from Oak Ridge and taking a fresh volley from a Union unit hidden and crouched behind a stone wall at 50 yards - 100 yards!

THe fight on the Union left is also going the Rebs' way as the Union unit there loses a pre charge MC and falls back off the hill.  THe Rebel Regiment moves in and the hill is theirs!
THe Union begins a gradual withdrawal from the cornfield on the right as well, seeking the safety of the fenceline north of the Smith Farm.

I called the game at about 20 turns.  With the Union consolidating their position further north, and the Rebs in almost complete control of the field, I'll give this to the Rebels although it was by no means decided.  Both sides had some fresh units and 80% of their Regiments and Batteries still on the field.  The Rebels had push the Union back to their starting lines but were hesitant to push further.

This game was a real blast and I attribute my playing of Tilly's Very Bad Day to showing me the raw potential of the Junior General rules, which I will play and tinker with for other eras including the AWI, SYW, and Napoleonics (there are scenarios and rules for all of those eras and many, many more on the site).

I think to jazz up the JG rules (which admittedly are meant for youngsters, likely in middle or high school) a few holes need to be plugged.  Here is what I would add for this ACW game, and I base this off of the great work that Stephen has done with Tilly:

The Turn Sequence:  The turn structure deserves some thought.  Tilly's Very Bad Day has a neat feature whereby the attacker moves, defender fires, and both sides launch charges.  I like that especially because Steven restricts shooters from charging.  Make no mistake - the game played perfectly fine as straight IGOUGO, but the "twist" that he puts in makes you think about just shooting all of the time.  Read Steven's thoughts on the turn sequence for Tilly here.

Rallying:  I like the idea that units can rally.  Even if this is a local gathering of shirkers and malingerers or even a dressing of the line and a restoration of the NCO's order over the troops, rallying occurs naturally.  TBD has a "heroics" feature whereby fighting strength and morale is restored through the destruction of enemy units referred as heroics in the TBD rules.  Again, this is worth taking a look at.

Units force off table:  A 12" retreat pretty much guarantees that you're going to have a unit forced off the table.  This happened in the Smith Farm battle to a Union Regiment and with a rules set that conveniently fits into a few paragraphs, it's natural that there aren't rules for this.  I'm inclined to say they're out of the game.

Command and Control Rules:  I love how the JG and TBD rules handle the use and commitment of commanders.  Commanders add a stand's worth of troops to your melee fighting ability and rallying ability.  I love the risk to commanders as well.  TBD has a command radius from a force (wing?) of units.  Any horse and musket rule set should include this feature as well.  I was not very disciplined in the addition of C2 ranges for this ACW battle but will be in future iterations.

Road Movement:  Probably not necessary given that units in column in the JG rules move 12" but I figured since terrain impacts movement in the negative, roads should enable movement in the positive.  I added 3" making a unit in column able to move 15" if they dared...

Line of Sight:  TBD has defined parameters for line of sight and they're worth taking a look at, especially for a "modern" era like the ACW, where rifle ranges reach 12".

Limber/Unlimer/Artillery Action rules:  TBD represents use of artillery as a much less mobile arm as it should be.  On an ACW battlefield, artillery enjoys much more mobility and the JG rules reflect this.  I should also add that I love the rules for "formations" - basically you can switch formation before or after movement, but you can do so only once in a turn.  This really just works.  Artillery gets similar treatment with movement and the rules don't distinguish between limbered and unlimbered, however an artillery battery can never fire on the turn it moves.

Breakpoints:  TBD has introduced some clever features to end the game.  Clearly units did not fight until the last horse, last man, etc.  Armies have a psychological or physical breakpoint.  This should be represented on the tabletop.

That's all for now.  Thanks for reading and you should definitely check out both the Junior General website, and the Tilly's Very Bad Day rules, both of which are free and reflect some great work on behalf of their respective owners.  Junior General has over 85 sets of rules and scenarios (!) and also a massive selection of paper miniatures to print out if you're short on time.  TVBD is well supported by Steven Thomas who posts weekly on many wargaming topics, but has posted at length about design considerations for Tilly.

Posted by Disgruntled Fusilier at 10:28 AM