This post is over a week late but I have been itching to write my initial thoughts about Warlord Games' "Blood Red Skies" World War II air to air combat game.

Ken brought the starter kit over which comes with 5 x Spitfires and 5  x ME109 Messerschmitts.  We played the first 2 x scenarios in the book and they delivered great action, great decision making, and lots of tension and excitement!  We were actually able to play 3 games in an afternoon and that was with much conversation and looking a few things up in the rules.  This also gave me a great excuse to put my Cigar Box Battle "cold water ocean" mat on the table, naturally serving as the English Channel during the Battle of Britain!

Rather than post a proper "batrep" I'll post some of the neat features about the game that I really liked starting first with the really cool models of the planes themselves!

First of all clear your head of pre conceived notions you might have had about aerial dogfight games.  There is no "altitude" in this game, and maneuvers are fairly generous as well.  The game is way more about resource management, decision making and managing your "advantage" in the current dogfight, denoted by the attitude of the airplane on the base.  Airplane cocked back with the nose pointing up at the sky is "advantaged", flight level is "neutral" and nose pointing down is "disadvantaged."  There are rules governing attacks based on your position and advantage.  You trade advantage to do things such as a risky maneuver or an extra attack.

The game really dispenses with the more technical thoughts that I had about air to air games (Check Your 6 being one of them) and makes the game about decisions - think OODA loop here and you'll understand what I mean.  Selling your advantage to do something now and having a plan thinking a few moves ahead to best your enemy is not only more "realistic" in my opinion, but it matches everything I've read from dogfight accounts.  Another cool feature?  Tie breaker in many cases is the aircraft's maximum speed.   Also, you do NOT want to let a fighter get on your tail at the 6 o'clock position, either.  ahem.  It invites all sorts of unpleasantness!  Take it from me, who is posting this from a leaky life raft in the channel, lucky to be alive...
The game is so abstract, but it all just works, and works well to deliver a fun game that I was still thinking about that evening after everyone packed up and went home - what could I have done differently?  How to stop those Spitfires?  How to deploy for tomorrow's patrol?  I am really excited to play again.

Ken and Dave played a more complex scenario controlling 4 planes each and the action turned into a "Furball" with aircraft all over the place.
THere are some neat cards that also help gameplay and enable your forces throughout the battle, allowing you to do extra things or do some things better. 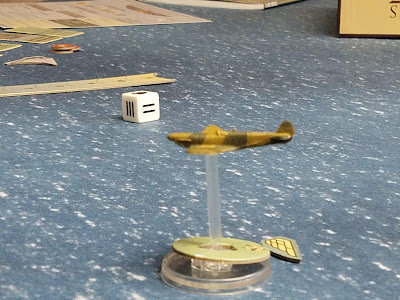 This was a short post I know, but I wanted to get my thoughts about BRS down and let everyone know that, sucker always for a clever set of rules, I forked out the 43 dollars and picked up a starter set from ebay.  Hoping it arrives soon so I can start painting up the planes!  Tally Ho!  Bandits 3 o'clock high!

Posted by Disgruntled Fusilier at 4:59 PM