Modifications to Neil Thomas' WWII Rules from Wargaming: An Introduction

Some of you were asking about my modifications to the Neil Thomas WWII rules from Wargaming: An Introduction which I hinted at in a recent post.  I played around with these over the weekend and they turned out to be a hit (with me, anyways!) 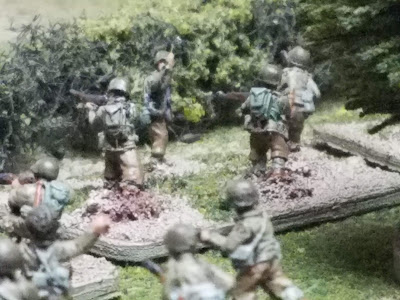 Long-time readers of my blog know my penchant for both Neil Thomas' WWII rules from Wargaming: An Introduction, and squad-based games where a maneuver unit is a squad.  I've always subscribed to the "2 levels down" command philosophy and I've always wanted my World War II gaming to reflect that philosophy.  I like pushing squads around a la squad leader and it explains why I've always preferred games like Norm's "Tigers at Minsk" where a maneuver unit is a squad and the player takes the role of a company commander. 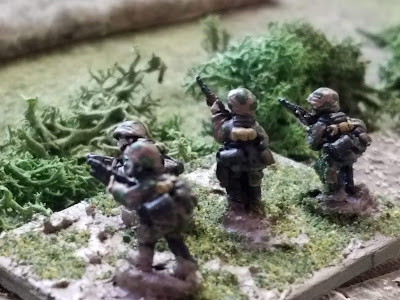 There are lots of really neat features in the WAI World War II rules (HE and artillery fire being some of my favorites) and I wanted to retain those features without changing too much in the game.

1. SQUAD SIZE
Your squads are 7 to 9 figures in WAI, with casualties being by-figure.  I dont want to do individual "figure counting" but I still want to retain the attritional nature of the combat.  To do this, I used a base of figures as a "squad" and presto, no more figure counting.

Squads are knocked out when they receive 7 unsaved hits.  No more figure removal.  I track hits with a dice behind the squad.  My "squads" are FoW sized troop stands of 4 figures but the number of figures on the base are irrelevant.

2. SHOOTING
In the "actual" WAI rules, figures are armed with different weapons.  I amalgamated all of the weapons into a 3D6 die roll, based off of the stats of the Light Machine Gun, since most squads in WWII have an organic light machine gun, I assume here the strength of the LMG is rolled into the 3D6 die roll.  I use the "to hit" values from the WAI rules just so.

I was thinking about a special rule for German up-gunned squads with 2 x MG42s shooting with 4D6, but otherwise the rules for shooting are the same.  1 Squad - 3 dice for shooting.  Submachine Gun Squads will likely have 4 dice or even 5 dice but an extremely short range.

3. MEASUREMENTS
I converted the WAI measurements to inches.  (no changes, just playing with inches instead of centimeters).  So a movement range of 10cms is now 4 inches.  Straight cm to inches conversion.

4.  MORALE
Morale checks are the first thing you do in your side's turn in the WAI WW2rules.  If a squad took casualties last turn, it takes its morale checks at the begining of its current turn and the results dictate what that squad can do in the current turn.  I simply take the morale check immediately after the saving throws from shooting.  (this makes no difference because the enemy can't do anything during your current turn, anyways.  I'm basically just taking the morale check early and not waiting for the opposing force turn to start.  It's really convenient for solo play but you don't have to play it this way.

5. CREW SERVED WEAPONS
I cant take credit for this one - it was Alex's idea - i co-locate an HMG section with an infantry squad instead of treating it like an independent unit that's practically impossible to kill!  (Saves hits on a 2-6!).  This means when the squad is destroyed, the HMG section is destroyed as well.  It do, however give the squad 1 additional hit due to the HMG crew.  I also allow the squad to fire its 3D6, then an additional 6d6 to represent the HMG.

I am looking forward to playing with vehicles and artillery for my next game.  The first game I played was a platoon vrs a platoon, each with 3 squads.  The game was very satisfying and had a realistic ending with the Germans breaking from cover to assault an American position, only to be cut down in the open by fire.

Those are all i could remember at the moment but if I think of any more I will update the post.  These rules are a ton of fun and give a very satisfying game.  If they're not on your shelf, they definitely should be!  I want to play a larger, historical scenario with them to see how it plays out.  I feel like these rules could handle a big, historical fight and give historical conclusions.

Posted by Disgruntled Fusilier at 8:46 PM