Cold War month grinds inexorably forward like a Soviet tank division as Dave and I linked up on Sunday for some much-needed face to face wargaming.  The battle?  Neustadt Junction - again!   For those needing a quick orientation, see my Tactical Decision Game post here.
This time Dave and I refought the battle with different rules.  The rules in question?  BF Team Yankee.  The minis?  GHQ's 1/285 micro armor.  The war?  The big one that never happened - World War III on the North German plain.
Dave and I played a smaller Team Yankee - 50 points.  I have to say with a smaller number of points, the choices one must make to support are critical!  How do you weight your force?  Tanks?  Mech infantry?  How much artillery or is there even enough in the budget to support artillery?  I had much fun building a force of a Company-sized element from the  BAOR's 1st Staffordshire, as well as an older Soviet tank division with T-62M models.  The reader will also note we had much fun with "special" weapons such as Krasnopol guided projectiles, tank-launched ATGMs, and Harriers!

The Soviets brought in the "big guns" in terms of supports and had a battery of 2S3 "Acacia" SP howitzers in support, which could fire the Krasnopol laser guided projectile!  Cool!  The reader will also note Dave brought his excellent 6mm tree stands along to populate the table with.  Love those trees!
The British have a company-sized element with a troop of Chieftains from the Royal Scots Dragoon Guards in support, as well as RAF Harriers in reserve.  Dave naturally placed the "Jocks' " Chieftains in ambush!

I step off onto the attack in the same way from the first thrust against Neustadt Junction - BMPs up the middle, and the tanks on the right.  The armor's job is to isolate the powerful hilltop position, and the BMPs will go straight up the middle as fast as their tactical movement speed allows - I need them to move and shoot constantly to keep the resilient British infantry pinned inside their foxholes. 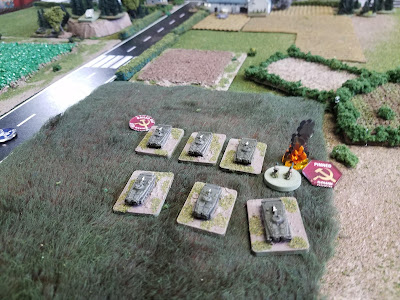 Turn 3, the Soviets continue to plaster Neustadt Junction with shelling and the BMPs grind forward, with their stragglers racing to catch up.  The T62s are forming a cordon around the hill to keep the pressure on the infantry.  THe MILAN gunners take the bait and start destroying T62 tanks instead of going after the BMPs.  Perfect!

I'm biting my nails so far and incredibly pleased that the Soviet plan is working.  The BMPs will be at the doorstep of Neustadt Junction in a turn with almost all of their dismounts present and ready to over-run the town.  I can almost taste the German bread raided from a "liberated" bakerei now.
One important consideration is the "danger close" aspect which is 6" for falling artillery.  I have to get my Soviet troops in far enough, blast the British to oblivion, dismount, then assault during the assault step.  Bear in mind that the British also must be pinned because their unpinned rate of fire is devastating.
Doctrinally, I'm going to use smoke from the artillery to cover my infantry's advance, also.
You have to sequence and time this dance perfectly for it to work.
Dave is still banging away at the tanks, knocking out 1 or 2 each turn as the BMPs edge closer to the junction.  Am I actually going to be able to pull this off?!?!?


The Soviet commander calls in the smoke rounds and they fall in a beautiful line, protecting the dismounts as best they can.  The BMPs move up in perfect, parade-ground precision.  They've practiced this maneuver many times. 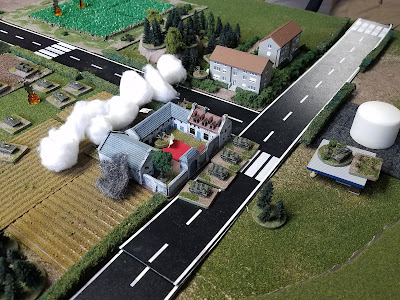 I should also mention that the British have sprung their RSDG ambush last turn finally and the Chieftains  join in the slaughter of the T-62 companies!  UNfortunately, my Soviet FOO is tied up with the smoke mission and cannot target them this turn with the special Krasnopol rounds!

The BMPs quickly lurch to a stop - the commander squinting through his field glasses, only able to see through fleeting gaps in the smoke.  "This is it" he whispers to himself and keys the radio - "ADVANCE!  ATTACK!  ASSAULT!" The BMP doors spring open and before he can even put the mike down, throngs of men are moving forward in a surprisingly coordinated and violent fashion, firing bursts and moving forward towards the village.  Murderous British tracers spring from virtually every direction as the ground in front of the village becomes a killing ground of defensive fire.  "Even while pinned the Tommies are a dangerous foe" the commander snarls.  British FV432s were brought up in support and the town opens up with fire from concealed positions.  The men's momentum is sapped and they go to ground or fall back to their BMPs! 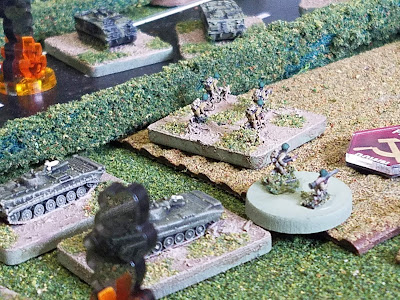 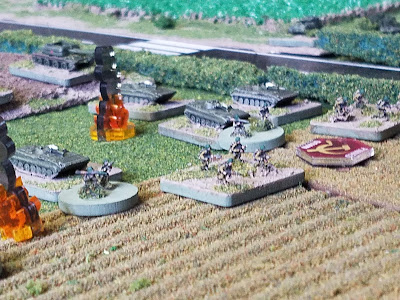 The heavy defensive fire really saps the assault, even though "only" 3 teams are lost.  The British turn is up next and the FV432 machine guns along with the abbots and infantry exact a high toll on the Soviets in the open.  Meanwhile, I am able to take out a Chieftain with a side shot from a T-62 that appeared around the corner of the right hill.  The Chieftains adjust and prepare to even the odds a bit with the armor next turn! 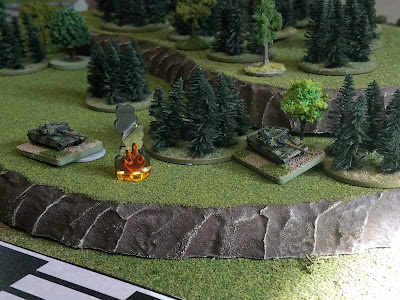 The next 2 turns would see much of the Soviet infantry eliminated trying to get back to their carriers, etc.
A bit confusing on the "tank attachment" rules here and figuring out when and how the Soviets would bug out due to morale.  Dave kills the Soviet Battalion commander with a well placed Chieftain shot, and completely shreds the Shilkas with 30mm rarden fire from the Scimitars.  This is ugly, but pretty desperate fighting on both sides.
Turn 7 the Soviet motor rifle company retreats from the field due to high casualties and failing its "good spirits" morale check.  The tank battalion ceases to exist as a fighting force with only 2 tanks left in total.  The British have successfully defended Neustadt Junction against tough, determined Soviets!  A tough, near-run thing!
Lessons Learned
So a gripping and edge of your seat battle - but what did we learn?  Well for starters, we were a bit rusty with the Team Yankee rules, especially rules around morale and transport units, as well as some of the myriad of "special" rules for certain weapons like the "brutal" feature of the tank guns, etc.
While many balk at bringing artillery due to points, or the high cost of tanks, I find that the combined arms approach is extremely important and validated.  Mechanized infantry are a great bet to bring along and are worth their weight in points.  Artillery has its use simply in pinning enemy troops (unfortunately the Soviets still need a 5+ to range in, so having your TRP smartly placed is important)
Ruthlessly, I find the tanks are great "throw-aways" to bring with you to attract fire of the infantry and the AT guns, while trying to over run with dismounts.  Artillery is wonderful to have to root out dug in troops and much better than relying on your infantry with direct fire shooting (but combine if you can - again - combined arms is key here).
Unfortunately we never got to test the AAA fire against the Harriers as the flyboys never showed up but the British were able to save the junction from being over run.
All in all, a perfect and relaxing game for a Sunday afternoon and a great Cold War themed battle to close out May.
The 2021 Gaming Calendar lists June as another World War II month and frankly I can't wait to get some Flames of War, Battlegroup, and maybe even some Iron Cross 15mm games back onto the table!
Stay tuned as I am in the process of building out some American Armor in 15mm - perfect for some Kasserine Pass games!  Work also marches forward on painting some 15mm Ancients, and it looks like Napoleonics are coming back to the workbench and gaming table soon.  All great stuff going on here.
Many thanks to Dave for showing me how to "Brew up" a "proper" cup of tea for the game (Fortnum & Mason with milk and sugar.  Fancy!), and also bringing his splendid terrain to fight over.
Posted by Disgruntled Fusilier at 11:53 AM