Battlegroup: Overlord - Shaking off the Cobwebs

Well WWII month was a bust, but not a total bust.  I worked 1/2 of most weekends and lots of family stuff occurring that demanded my time and attention but I last week I did find myself with a bit of free time to throw some troops down on the table and fight out at least 1 x WWII engagement during "World War II Month" on the wargaming calendar!

The scenario featured almost all infantry forces and I used the "Defense Line" scenario from the Battlegroup: Kursk rules.  The Ami's are rated as "inexperienced" and the Germans as "regular."  Infantry platoons were the core force for both sides and they got to bring along some nice supports as well.  The Americans must break through and capture the village at the other end of the table.  Unfortunately there's a wooded area, crops, and a small farm to overcome first.  Naturally the Germans weren't going to let them walk in!


The Lieutenant brings up some firepower and a plan is formed to edge their way along the field to the left.  The entire platoon is making its way up here to the line of departure so they'll have the remaining squads flank the woodline while artillery plasters the treeline ahead.
It turns out that Ernie Pyle was embedded with this group of American Soldiers.  He took some classic World War II photos of the action!
As the GIs move up to the hedgeline, a German MG42 team which was on ambush fire in the woods across the field opens fire on them, causing havoc and pinning the GIs.  The FO, with the "radio network" special ability (yes, the Americans come with LOTS of cool abilities in Battlegroup) rerolls the comms failure and reaches the fire direction center.  Unfortunately the spotting round is way off target.  Cancel Mission!  Cease Loading!  He yells to the FDC.


It's looking really grim for the Americans right now.  The MG42 with the tripod gets a whopping 8 fire dice and is forcing lots of chit pulls!  The Germans are playing very conservatively, however, because while their BR is high, they dont have the infantry numbers to spare.  They do, however, have 2 x armored fighting vehicles, a Marder and a Panther, that they're going to start using!  The Marder starts blasting away at the Americans, prompting  the bazooka team to come up.  The flanking force is just starting to get moving.  THis seems too easy. 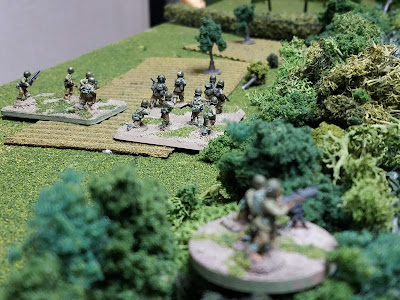 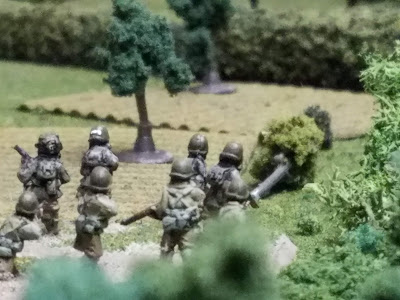 THe Germans are cagey.  They've pulled back to the village with the MG42 team escaping through an orchard as the Americans just came into sight trying to flank them.  While they're setting up a new position, the Panther engages the flanking force in the open with co-ax fire!  WHere the hell is the bazooka team!  Meanwhile the Americans close assault the sniper in his hide site to the loss of 1 man who gets hit on the way into the assault! 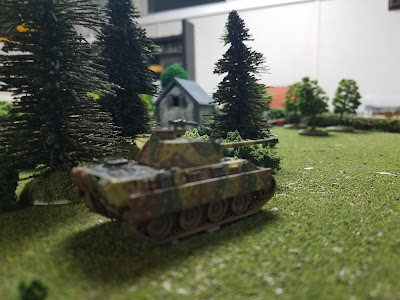 The destruction of an American rifle team at the farmhouse seals the deal for the Ami's and they pull their final chit that surpassed their breakpoint.  The Germans were only 3 away at this point.  What a close game!  The Americans took heavy casualties to gain that treeline and the farmhouse, but couldn't hold onto them.  Tomorrow morning they're going to try again.  The artillery was a complete disappointment, and the "old man" plans on speaking to their commander about it tonight.  The Germans are still in the village and waiting for the Ami's to move up.


Thoughts
Well that game pretty much made up for my sad lack of posting for April!  So it's safe to say WWII month wasnt a complete disappointment.  I had been wanting to play a Battlegroup game for a bit now and it didn't disappointment.  What's even more impressive?  The game was played on a 3' x 4' surface with 15mm minis.  Half of my 6 x 4 table.  The shorter ranges meant the units started in contact with each other and made for a nice, brief but really sharp game.
The Squad sized game was perfect for solo action because you really have to focus on decisions to make as you'll only have on average 4 orders per turn.  It's also impressive how a single squad and a SP gun can hold up infantry forces and Battlegroup really shines here with tactics at the small unit level.
Unlike Flames of War (which I plan on playing through with this same scenario) the terrain is extremely important to how the game plays and I made sure to put alot of it down.
A small, 300-400 point game is literally perfect for a Friday evening of gaming with smaller breakpoints.
Well I hope you enjoyed this game.  "Cold War" Month for May and I'm hoping my team can link up to dust off the cobwebs from Team Yankee and hopefully Battlegroup: NORTHAG!  Stay tuned!  Lots of Cold War goodness coming up!

Posted by Disgruntled Fusilier at 9:02 AM