The Battle of Brussels 1815 (Commands and Colors Napoleonic Game)

Last night Brian hosted the culmination of his outstanding play-by-text of the boardgame "Napoleon" where we played the 100 Days campaign and when the blocks aligned on the map for a battle, we played a Commands and Colors: Napoleonics game to settle things.

You may recall the gigantic nail-biting clash at Liege last month where the Prussians put a good sized dent in the Armee du Nord and almost....almost snatched a victory from Napoleon!  (Played by Mark).

The final battle saw the French squaring off against the British, who are guarding their main escape route to Ghent while defending Brussels.  The stage was set for a massive confrontation where the "Allied" Army (Dutch, Belgian, German Armies) faced off against the French.  We played with a gigantic 20-21 units per side.  Look at this table! 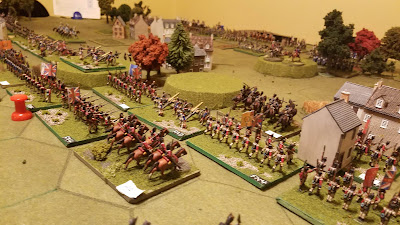 Readers know how I feel about playing CCN with Brian and Rich's awesome kit.  Large single-unit stands with 1/72 plastics makes for a gorgeous table, complete with colors flying, and mounted officers pointing out the enemy.  I was in for an even bigger treat last night as Rich brought over his completed HaT Dutch Belgians which looked simply amazing.  Brian provided food, snacks, and even sherry.  ("To the day's fox, gentlemen!")


Our deployment was good although we learned some hard lessons during the game about deploying and staying too close to the baseline and also "brigading" the British and their allies together.

The Allies occupied the left wing of the field with their best troops including Grenadiers and Belgian Heavy Cavalry.  A "grand battery" was established in the center covering the most likely French approach from both the center and French right.  The French had a very significant amount of quality artillery (4 or 5 units) as well as 4 units of high quality Cavalry, including Guards Heavy Cavalry.

The French launch an assault in the center only to be bloodily repulsed by the 95th Rifles and a mass of Allied artillery.  It's a bloodbath and the French pull back from the center assault.  Rich correctly identifies the mass of terrain in the center as key terrain and it turns out to be a bastion for the British as the French dont even come close the whole battle to over running the Guards.  They do, however, have a score to settle with the 95th and launch a concerted attack against the 95th's position with both artillery and troops to flush them out.  They do so with extreme prejudice! 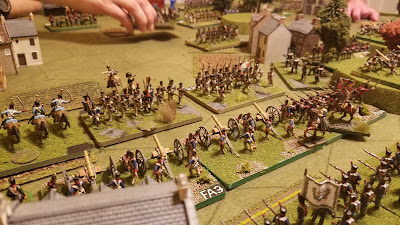 The French having taken a beating after their initial assault look at the battlefield for their next opportunity.  Napoleon notes the Dutch-Belgians on the Allied left.  The next assault will fall against them!  The Cavalry moves forward...

A concerted effort is shaping up against the Dutch Belgians on the left.  Mark (Napoleon) pushes a ton of combat power forward and the Allies will have to take all of it without their British allies backing them up (a major lesson i learned today). 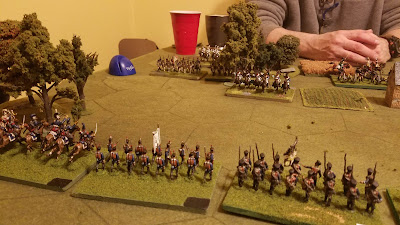 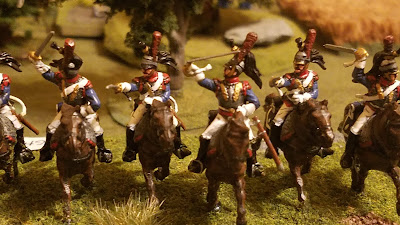 I ended up forgetting to take more pictures but I hope you can tell from the pictures that the game was outstanding.

The French ended up winning the battle 10-8 but we gave it one good try with a center assault card, trying to unleash a few units' worth of firepower against the Guards Heavy Cavalry.  Unfortunately they take a flag result and retreat back to the safety of their lines.  That was the last chance we had to tie the game at 9-9.  The next turn, the French roll up the Dutch-Belgian Grenadiers and the game ends!  It was a real nail biter with dramatic reversals of fortune on both sides.  We started playing around 8pm and didn't end the game until well after midnight!!  I was able to hang in for awhile but by 11:45pm I was starting to crash!

It's probably worth mentioning here that I really love Commands and Colors Napoleonics.  In fact I told Brian and Rich that all week I was really looking forward to fighting this battle.  I feel like no other game gives you the narrative, excitement, and tension that CCN gives you and it's one of my favorite Napoleonic games.  I will never turn down a game of CCN, especially with Brian and Rich's outstanding plastics!  Gorgeous looking toy soldiers!

I definitely learned to brigade more quality troops with lesser quality troops, especially British.  The British infantry as Brian pointed out, are even better than their artillery in terms of close firepower.  Had we had a British Brigade on the left to shore up the Dutch, I think the game may have turned out differently.  Also, we should have advanced the line further up to give our units room to retreat.  Deploying and staying on the edge seems to be asking to lose units in the game.

It was a pleasure playing a game with these guys.  Rich is a great partner to have on your team and he plays tough but careful.  I had a blast and I can't wait to play again.

Probably also worth mentioning that Mark, had he lost, was going to have to read Napoleon's letter to the Prince Regent requesting asylum:

"Royal Highness, Prey to the factions which divide my country, and to the enmity of the greatest powers of Europe, I have terminated my political career, and I come, like Themistocles, to throw myself at the hearth of the British people. I put myself under the protection of their laws, which I claim from your Royal Highness, as the most powerful, the most constant, and the most generous of my enemies. Rochefort, 13 July 1815. Napoleon.”

Mark - if you're reading this - you can order the custom CCN dice on ebay here.

Following yesterday's dental appointment, I raced home for the epic, bloody conclusion of the Oak Ridge fight during Day 1 of Gettysburg.  This could have gone lots of ways with the Union clinging on desperately despite losses and the friction of many units in flight.  We are coming back on Turn 5 less than halfway to endgame for the battle.

The Rebels continued their assault up and down the line, with O'Neal's Brigade pushing into the ridge.  The 12th Alabama takes pressure and finally relents, leaving their toehold on the ridgeline.  Fresh Regiments of Paul's Brigade take their place. 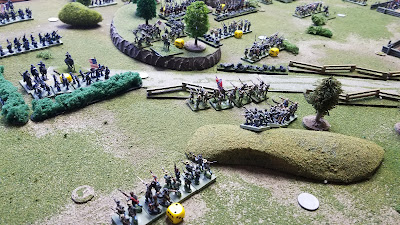 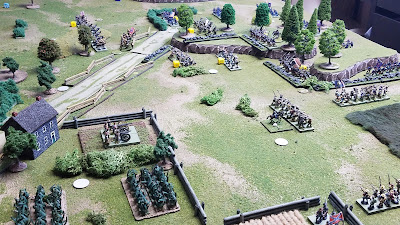 The Rebel Artillery see an opening in the line and take full advantage, scoring an impressive 3 hits and driving off the New York Fire Zouaves from their positions.  Unfortunately, they beat a hasty retreat with nowhere else to run!  They drove off the Yanks for the cost of a crate of ammunition. 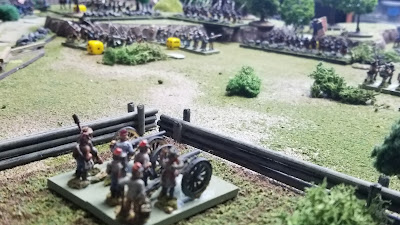 On the Confederate left, a sharp firefight breaks out with volleys being traded each turn.   Lots of leadership rolls here, and O'Neal is personally directing the fire of his Regiments.  The Union Division Commander, Robinson, is doing the same.  Guess what happens? 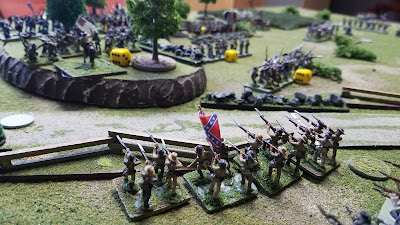 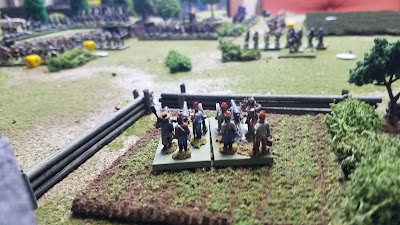 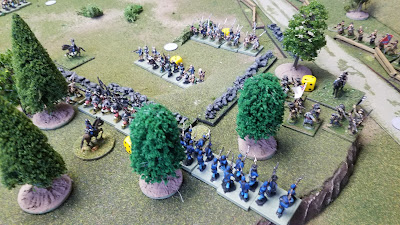 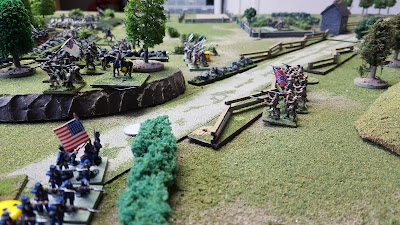 The 147th PA holding the Union left flank is defending itself gallantly, fighting off 2 of Iverson's close assaults.  It's worth noting that Iverson's Regiments are going in unsupported.  It's the best they can do at the moment. 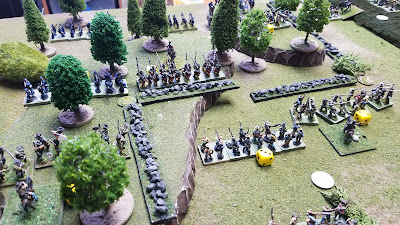 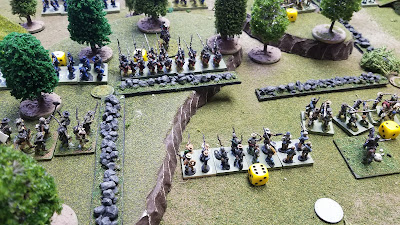 O'Neal is killed in a sharp exchange of fire on turn 7 and the Rebels alter tactics, opting for "the back door" of the position, instead of a direct, frontal assault against the ridge.  O'Neal's death puts his brigade in a tough spot as they are all disordered and only 1 of 4 would rally on subsequent turns.  Tough luck but they did their job admirable holding down Union reinforcements while Daniel's fresh brigade takes the ridge by storm. 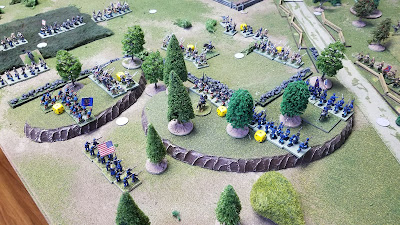 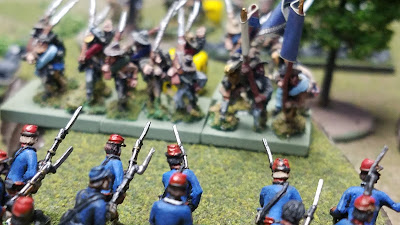 Daniel's attack is fierce, garnering 2 x extra dice for flank assault and 2 x extra dice for supports he will assault with a crushing 9 dice!  The final tally would be 4 hits scored, and 1 hit scored against him (a single "1" rolled).  It's enough to cause the 147th to lose 2 more casualties (only 2 due to their cover) and force a Capability Test which they lose.  The position has been gained by Daniel's attack! 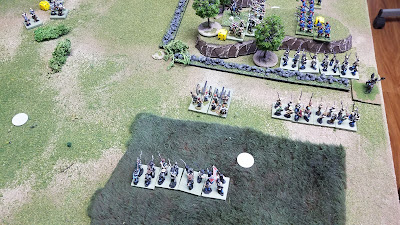 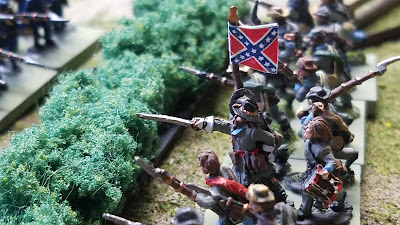 Wow what a nail-biting slugfest.  I think the game captures the tension and high drama of the first day of Gettysburg accurately with a great "back and forth" see-saw to the fighting.  Victory goes to the force who has a convenient and immediate reserve to plug a gap and can take advantage of a hole that's opened up in the line or flank a unit that is distracted to its front.  The random events table adds a nice element of tension and unknown as well.  I would say O'Neal's Brigade did the lion's share of fighting, save for some brave Regiments from Iverson's Brigade who attacked the 147th PA again and again only to be repulsed again and again.

For a battle involving a total of 22 Regiments, I can say I probably spent more time planning this fight than playing it, which is a huge plus.  THe whole game probably took 2.5 hours which is great.  The squares made it a little bit fiddly and I wonder if it would have played easier with hexes.  Also, the use of my tablet forced me to constantly scroll back and forth between certain key sections of the rules and I still forgot certain rules like the casualty retreat test when a unit reaches 6 casualties.

Thanks to Norm who has created an outstanding game that captures ACW flavor, action, and drama with simple and elegant mechanisms that deliver plausible results.  Mission accomplished!