Last week's sojourn to "Cold Wars 2019" and the blog post on SPI's "Cedar Mountain" got me thinking more and more about hex based games.  All week I read through Norm's Two Flags - One Nation rules on my commute to work and back and am really itching to play Two Flags - One Nation ACW again, either on grids or hexes.

Anyways, the ACW theme of late and the current zeitgeist regarding hex based games has me looking through some wonderful scenario books that haven't been touched in ages. 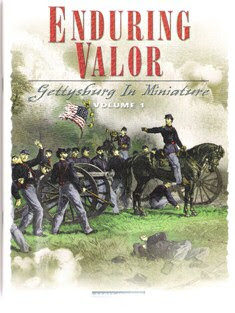 I purchased Scott Mingus' books a long time ago when I was stationed at Fort Sill and had my armies based solely for Johnny Reb III.  Some of my more "seasoned" readers know my feelings about Johnny Reb, but Mr Mingus' scenario books were so well thought out, detailed and enjoyable to read that they worked well for just about any wargames scenario - hence my purchase back in 2004. 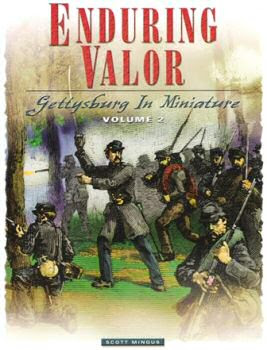 So are we going to break anything if we try to port over a Johnny Reb III scenario to a Two Flags - One Nation scenario?  Let's find out:

Johnny Reb III and Two Flags - One Nation both use the Regiment as the basic unit of maneuver.  Personally this hits a sweet spot for me with ACW gaming.  Check.

The Enduring Valor scenario map books use 1" to represent 50 yards.  Two Flags - One Nation uses 1 hex to represent 200 yards.  I use 4" hexes or squares.  Check.

Scenario Events / Special Rules
Enduring Valor uses a small box to describe scenario special rules and discuss terrain and its effects on the fight that are of tactical and historical significance and may differ from the rules.  Two Flags-One Nation uses a random events table to act as a forcing function for special circumstances that may have historically happened.  The table can be as detailed or as generic as necessary.  In many cases, terrain is automatically built into the rules, making them much more streamlined than in a more open, conventional wargame.  Check.

And now, the unboxing!
I found a smaller scenario from the Enduring Valor scenario book from the Day 1 battlefield.  This equates perfectly to Norm's 12 x 9 hex battlefield.  We'll just use all Regiments as normal sized (all vary between 220 Soldiers and 580 Soldiers), Seasoned Regiments for TF-ON, since they're all the same quality.  Perhaps some of the larger Confederate Regiments (43rd, 45th, and 5th North Carolina Regiments) could be "large Regiments" in TF-ON speak.

All units on the field are armed with Rifles with the exception of the 88th Pennsylvania which you could dice for (it's a mixed unit).  The confederates have 2 x Batteries of Artillery, the King William, Virginia battery, and the Orange, Virginia Battery.  Each unit has 3 x Brigades and the Confederates have a battalion of Sharpshooters present, which you could use I suppose but for simplicity I'll leave them out for now.

All forces start on the table, except Paul's Brigade, which we will dice for on Turn 3 (dice per the TF-ON rules).  The Union, while outnumbered, has General Robinson, Commander of the 2nd Division, I (US) Corps.  The Rebels do not have the luxury of General Rodes, their Division Commander present.

Piecemeal Attacks:  Rodes apparently did not have all of his brigades attacking together and piecemeal attacks were launched against this Union position.  O'Neal's and Daniel's Brigades must always roll a 4+ to move in their turn.  If the events table delivers a "supported advance" result, those brigades may move freely that turn without having to roll the 4+ to move.

Some really neat trivia?  North Carolina's General Alfred Iverson behaved less than stellar during the battle, allegedly hiding, or drunk, behind a chestnut tree while his unit "went in" and broke itself against Union fire, which was held until they were less than 80 yards out.  Sounds like a good candidate for the "random events" table, right?

Additionally, (by the way, this is all in the Enduring Valor book, so you should buy it) some historians have noted that Union troopers fired over 100,000 rounds during the afternoon of July 1st.  Low ammo is sounding good for the random events table also.

US Forces
Elements of the Union 1st and 2nd Divisions, I (US) Corps
Wadsworth's Division (all seasoned, all Rifle Musket armed)


Terrain
There are a plethora of fences, fields, walls, forests, and orchards.  I'm not sure how many fences ought to be included in TF-ON and that's something I'd like to look at further and playtest.  Also, the forests and stone walls that the Union are taking cover within, along with Oak Ridge itself are key terrain.

If I could make the map, I certainly would.  My next step is to try and put these units together along with the battlefield to make a proper field.  I definitely need a ton of fences that i will have to make, but i can model only those fences where the fighting took place along.  That's my compromise for now.

Posted by Disgruntled Fusilier at 12:21 PM