Have a "dental thing" I am getting taken care of today so this morning after the children and wife cleared out, I had an opportunity to play the first half of the TWO FLAGS - ONE NATION American Civil War rules.  The last few days, I'd been analyzing and building this scenario from a Johnny Reb III Scenario taken out of Scott Mingus' excellent "Enduring Valor" Gettysburg scenario book.

Rolling on my random events table for this battle, "piecemeal advance" is rolled and that means each Regiment from BOTH Brigades (there are options for just O'Neal and Daniel's Brigades to get piecemeal advance) Regiments must roll a 4+ to do anything but fire this turn.  The rebels move out.  It's not far to close the distance between Oak Hill and the ridgeline that anchors the extreme right of the Union flank at the moment.  Most of O'Neal's units roll fine and begin their attack.  Iverson's Brigade claws through the orchards and fields around the Forney house, and the Artillery limbers up.


The grid isn't being too finicky although I'm finding my eyes naturally move towards the grey colored markers instead of the flock ones.  Not that it matters much here, but the gray markers mark the center of a 1 foot square, they are not the squares themselves. 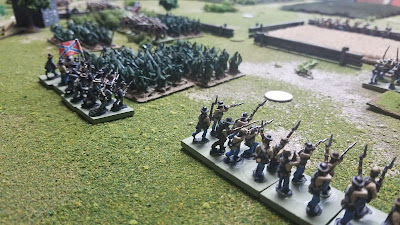 The Union don't do much except re-position a Regiment from Baxter's Brigade to face O'Neal's onslaught of Confederates, who are within small arms range and are approaching their positions.

The random events for turn 2 yield a "advance turn clock by 1 result!"  The leisurely rebel advance is going to have to pick up the pace.  A sharp firefight breaks out at the 12th Mass' position and they fall back!  The Union have their backs to the wall, and the arrival of Paul's Brigade, while welcome reinforcements, mean that any failure of a Union Capability Test and the Regiment will retreat off the board!  There is just nowhere to go. 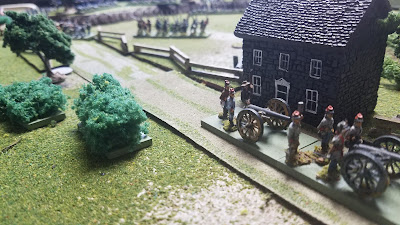 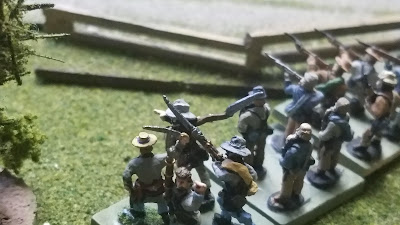 Meanwhile Iverson's men are skirmishing with Cutler's Brigade behind stone walls and in cover on the ridgeline.  The shooting is inconclusive for 2 straight turns and Iverson's men will have to go in with the bayonet.


Well in game terms, it's 3pm and so time to get moving.  Top of Turn 5 where we will leave off.

Paul's Brigade has come up, although not quite where I need them.  They'll force any Union unit that fails a cap test from casualties to rout off the table...  Ugh!

We've already lost 2 x Union Regiments from Casualties so far and the Rebels are starting to apply pressure to Cutler's Brigade now as well.

The game has played very well although I would have benefited from a hard copy of the rules instead of playing off my tablet completely.

One question I had was about leaders - A unit that must rout off the table (page 13 - due to friendly units blocking any square or hex for them to retreat into) has an attached Brigade Commander.  He passes his casualty check and so is still alive.  Can he just move to another hex or square?  What happens to him?  Page 16 says he may freely accompany the retreating unit.  What if they're routing?  Does he just go with them?

A real nail-biter so far.  The casualty conditions (40%) and the nature of the table really mean that the Union cannot afford to route another 2 units or they're toast.  Let's see what happens.  I'd love to play tonight and finish the battle.  Only 4 turns left.  The Rebs could technically push deeper into the position, well supported by their comrades (although no Brigade-to-Brigade supports since Rodes, their Division Commander, is not present.  All Brigades must use only internal supports).
Posted by Disgruntled Fusilier at 10:48 AM