MAPLE LEAF UP! (lots of pics)

The Summer of Battlegroup continues!  Today I played a 500 point, solo Battlegroup: Overlord game featuring the host of forces from Friday's Bolt Action game and what an exciting game it has been so far. 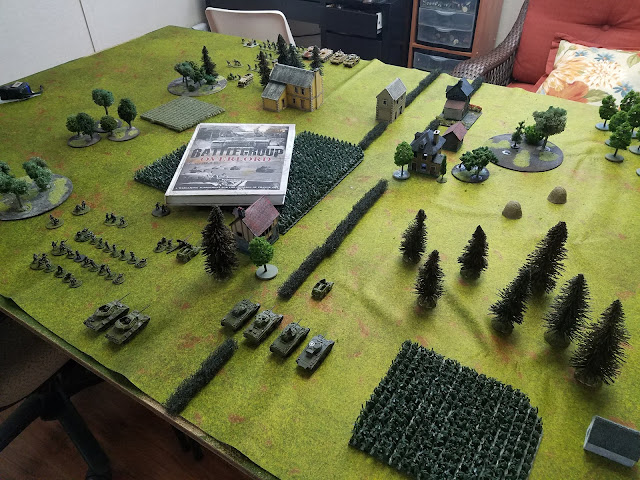 The Canadian forces consist of an infantry platoon of 3 x Squads, a PIAT crew, light mortar, platoon command section, a Bren carrier recce section, a Sherman troop with an extra Sherman, a lloyd carrier with 6 lb'er AT gun with a 3 man loader team, a forward headquarters, and 2 x M10 Wolverine TDs.  They also have a 25 lb'r battery as part of the Battlegroup as well as an FO section.  BP is 37.


The German forces have an SS panzergrenadier platoon of 3 x squads, 2 x Panzer IVHs, 2 Panthers, a Panzerschreck Team, a recon foot patrol, sniper, a PAK40 AT gun with 3 man loader crew, and forward headquarters mounted in a halftrack.  BP is 32.  The Germans are also "veteran."

I played the "Flanking Attack" mission from the Battlegroup: Kursk rulebook.

The Canadians got off with a straight "6" when rolling for units so literally all of the Canadian armor started on the table with the Germans rolling a measly "1" so they started with a Panzer IV in addition to the recce squad and sniper.

There is some light actions as the Canadian armor fires at the German recon teams in the yellow house and woods.  They eventually break contact and move into the house or behind it.

The Germans have started moving reinforcements up now out of the woods from their deployment zone.  Why didn't I take a prime mover for the AT gun again??  The Germans are moving up their infantry now into the houses in the village.  The Canadians are focusing on the yellow house as a jumping off point for their assault into the village. 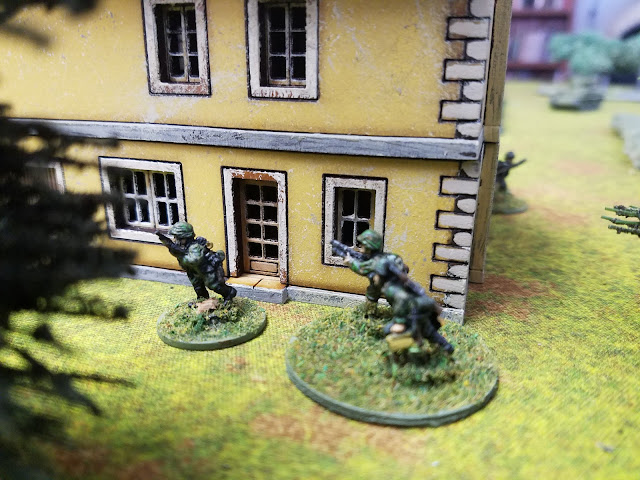 Firefights break out along the line with the Germans getting the worst of it all.  Incredibly, the Bren carrier survives a direct hit from a Panther by rolling snake eyes for the penetration roll.  If I didn't take a picture of it, you'd never believe it! 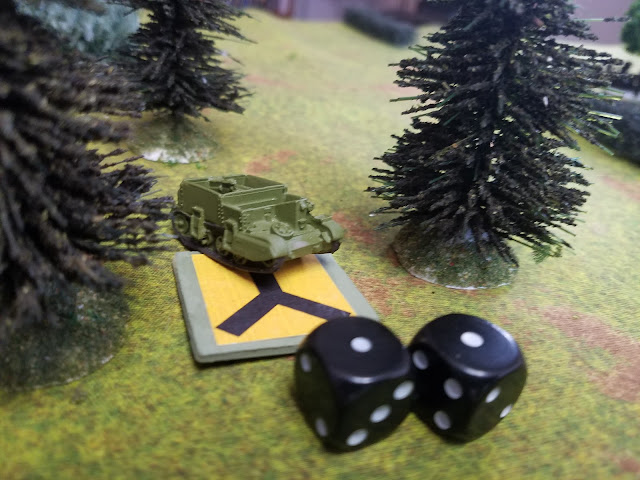 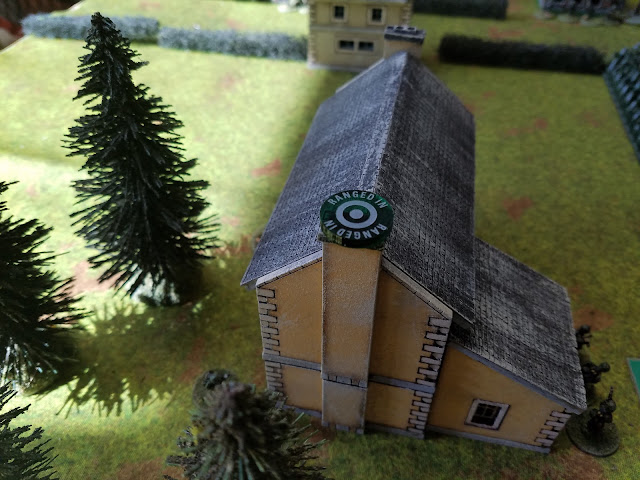 Turn 4 was a very bad turn for the Germans.  Not only did they lose their grip on their right flank (the yellow house) but they lost the Panzerschrek team, an LMG team, and a rifle team and that meant alot of chit draws.


The Panzerschrek team, reduced from artillery, rolls a "Beyond the Call of Duty" for its morale test, breaks from cover, all under artillery fire, and fires at a Sherman tank.  He kills the sherman with a round into the flank!  Meanwhile the troop commander exacts revenge by coax'ing the hell out of the remaining Schrek team member, killing him.  Another chit for the Germans! 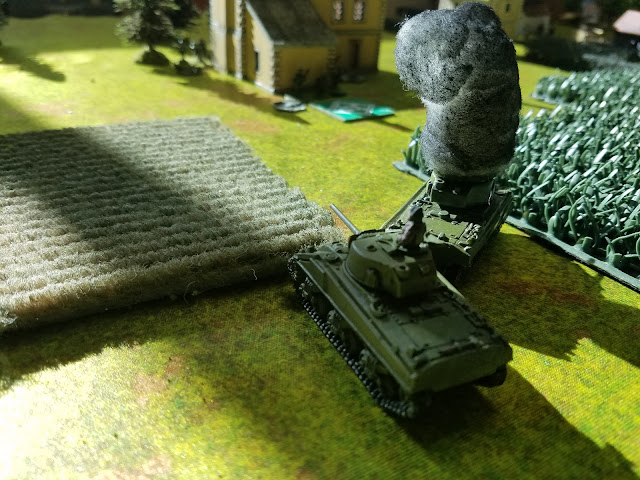 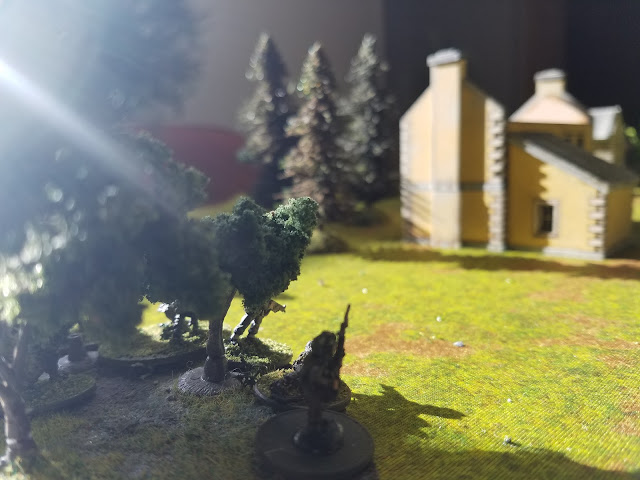 The German armor is reduced to a single panther who is pinned.  The Germans are in rough shape now with 21 BP out of 32.  They will need to play cagey with the more heavily armed Canadians if they are to pull out a win.  Speaking of which, the Canadians are only at 15 BP as of when I stopped playing this afternoon.  It's the bottom of turn 6.  The Canadians sent their tank destroyer troop across the road to hold the objective where the Bren carrier is burning. 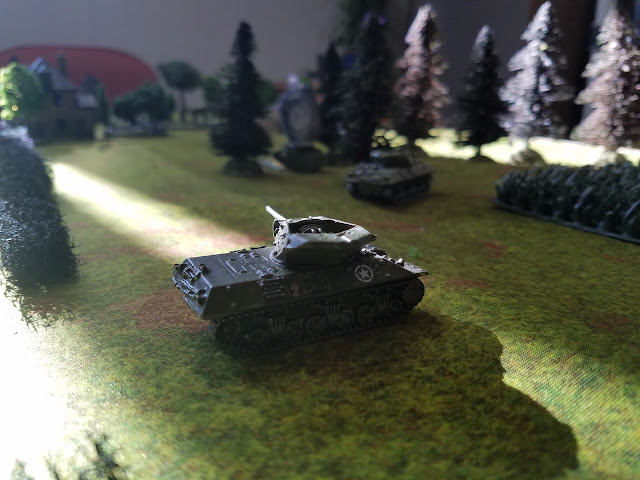 This game has been outstanding so far, full of dramatic reversals of fortune and no shortage of action.  This is my first time playing the Flanking Attack mission and I love it.  There is lots of maneuver right from the get-go.  I'm not sure if the Germans will be able to salvage a victory here but it's definitely been fun watching them try.

There is something fun about playing with individually based troops as well although I think if I would have played with team bases, the game would be going a little faster.
Posted by Disgruntled Fusilier at 9:07 PM 8 comments:

But it's the Summer of Battlegroup!  True enough but after a crazy week there just wasn't enough time for setup  and creating a scenario, so Dave and I got together, threw some terrain down on the table and played an awesome, action-packed game of Bolt Action in 15mm! 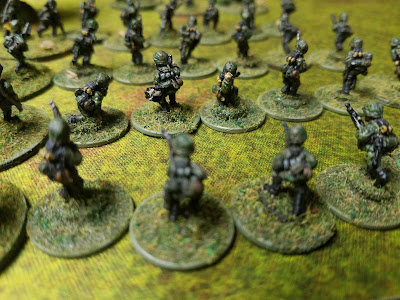 We started from each long edge of the table and just started advancing like a meeting engagement.  Dave had work Saturday so we couldn't play too long.  We had enough time for a little over 3 full turns.  Dave played the Canadians and I played the Germans.

The armor had the best mobility and range and they were the first ones to make contact!  A knife fight started on the road with Dave's tank destroyer team banging away at my Panzer IVs.  If you wondering, all of the troops were "regular" classed.  Nothing fancy here! 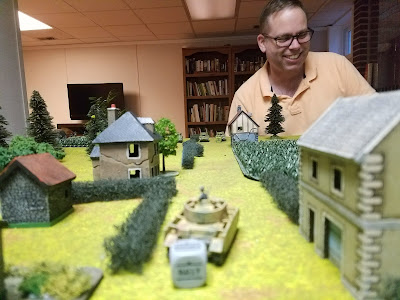 Dave's Shermans started to get into the knife fight with the Tank Destroyers and still we couldn't hit anything!  Lots of "1"s thrown around. 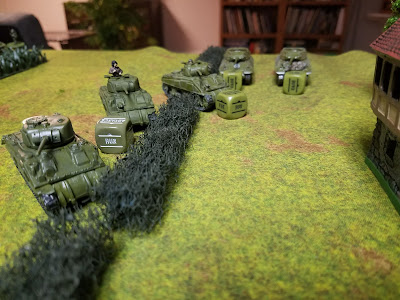 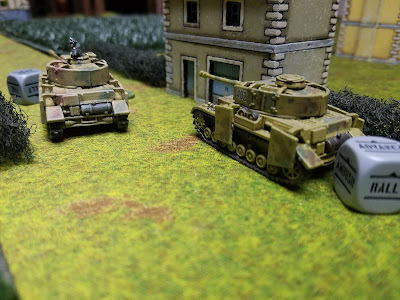 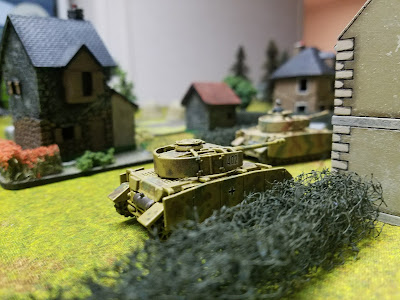 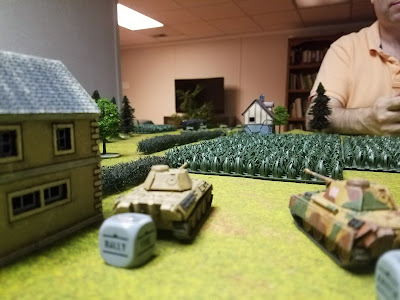 Dave's infantry start to get into the fight and move up to the woodline and a fierce firefight breaks out. 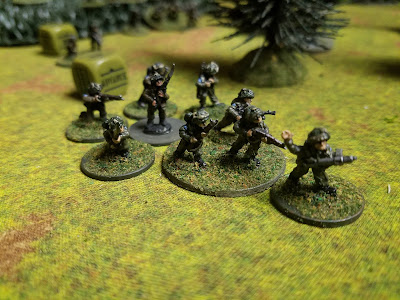 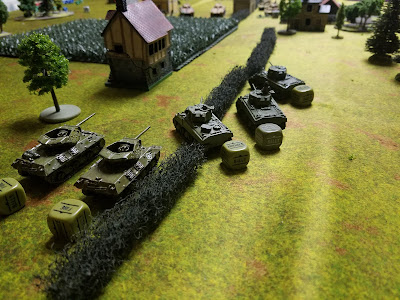 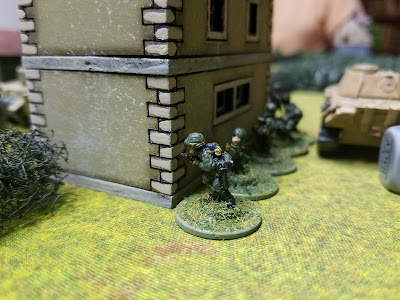 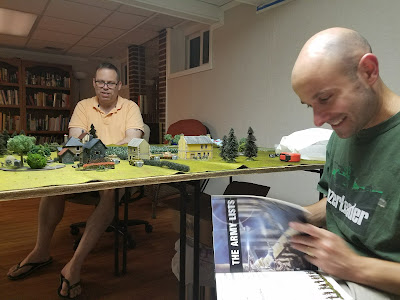 The SS infantry in the building draw the attention of the many, many sherman tanks down the road and they start pumping HE rounds into the house! 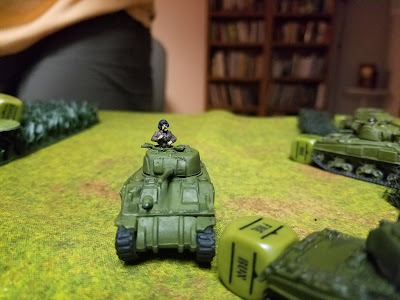 A Panther gets a mobility kill on a Sherman and a Panzer IV knocks out a tank destroyer.  Not bad for 3 turns of shooting!  Big trouble on the SS left flank though, as Dave, just like he did at Historicon, masses his infantry in the treeline.  My 8 man squads are no match for his 11 man squads and the numbers start to tell. 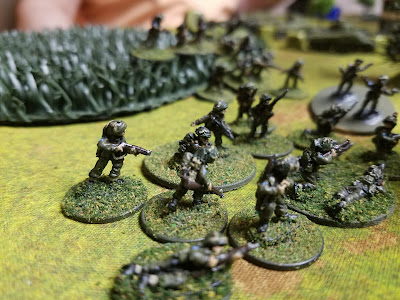 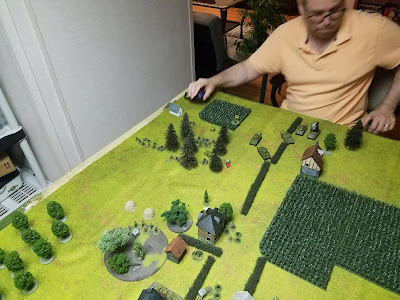 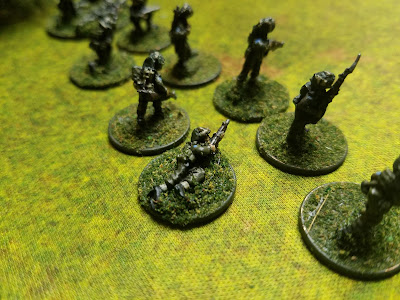 Speaking of which how many pins do tanks get in Bolt Action??  Is it based on the size of the crew?  Is it 10?  The lead Panzer IV had 4 pins before I started to make an attempt to rally them.  (the platoon leader being in their way blocking retreat on the road was part of that effort - not a bad tactic at all). 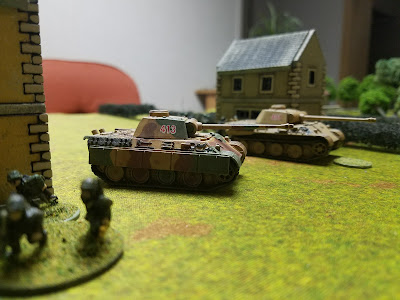 The more we played, the more I felt this game would have been KILLER fun with Battlegroup.  Perhaps we'll try that next game.

Bolt Action always delivers a very fun-filled game that has an awesome "toy soldier" feel to it.  The armor system, which i originally felt was over complicated, is really growing on me, and same with HE fire.  Dave was surprised with how under-whelming his Sherman's HE fire was especially with my troopers in the building but that's the way it goes.  He MORE than made up for it with his light mortar, which scored a direct hit on the farmhouse killing some HJ troopers.

A "cracking" game for a Friday night.  While I'd rather be playing Battlegroup, it was nice to break out these guys on the table and have at it.  We stopped at the top of turn 4 with the armor just coming to grips and starting to score some casualties and the infantry fight really heating up on my left.

Posted by Disgruntled Fusilier at 9:23 AM 4 comments: