Greetings Friends - I got to play in a very large Commands & Colors: Napoleonics game on Sunday at Brian's house with Mark and Ken.  We played with Brian and Rich's magnificently painted 1/72 plastic and metal troops.

This game was a culmination of a "Play by Text/Email" campaign Brian had hosted of the classic boardgame "Napoleon" replaying the 100 days campaign.  Yours truly played the Prussians, co-commanded by Ken.  Mark played Napoleon.  As fascinating as that campaign was, the subject of this post is the CCN game we played Sunday afternoon - the fictitious battle of Liege.

The strategic situation as it was had us playing a massive battle to decide the outcome of the city of Liege, and the future of the Prussian Army's involvement in the campaign to stop Napoleon in 1815.
Brian used the status of the forces we had in the boardgame to determine the forces of what we started with.  The Prussian Army consisted of 14 x infantry units, 3 x artillery units, 2 x cavalry units, and 4 general officers.  The French had....well I can tell you they had a shed-load of cavalry!  The imperial guard, plenty of infantry, and artillery.  In short, almost the bulk of the French army in 1815 was coming after the Prussian Army in Liege.


Mark's first move is to send light cavalry forward to assault the guns next to the redoubt!  "The ball has opened".  We send Prussian Uhlans out to counter them on our turn.  The Prussian redoubt on the right proves to be a very tough nut to crack.  Mark also sends a unit of Imperial Guard up the center to assault the ridgeline!  An interesting aside, none of my artillery started in redoubts.  None of it!


The major action in this game would center on the ridgeline in the center section of the battlefield and the redoubt located there.  The French would make some big pushes to clear off the ridge, including moving up heavy guns and plenty of infantry and heavy cavalry.  Mark would eventually score a breakthrough with heavy Guard cavalry, but didn't have the infantry to follow up the success.  Mark also skillfully stole the initiative by using his cavalry to keep multiple Prussian infantry units in square for much of the game.  More on this... 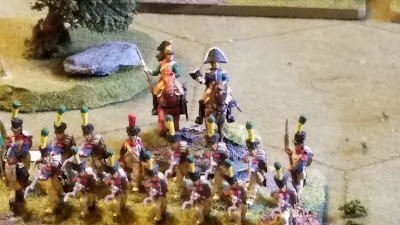 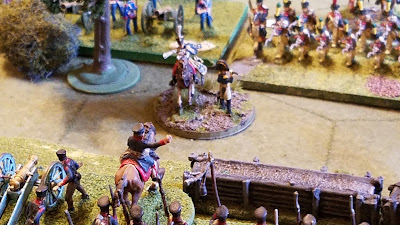 Mark does a great job of clearing off the initial line of defenders on the center ridgeline.  I made sure to keep elite Prussian Grenadiers and also Landwehr in the woods behind to reinforce the ridge. 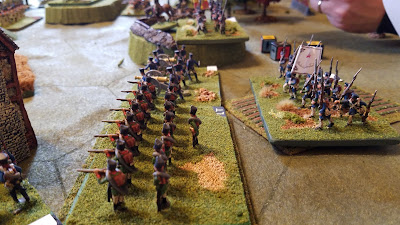 The battle starts to take a different turn as 2 of 3 Prussian batteries are wiped out and Mark unleashes the full might of his Cavalry to start "taking out" units and/or forcing infantry into square, then pounding them to dust with infantry or artillery.  It's a good strategy.  The Prussian Cavalry gives a good account of themselves but the Prussian "Fire Brigade" Heavy Cavalry can only do so much! 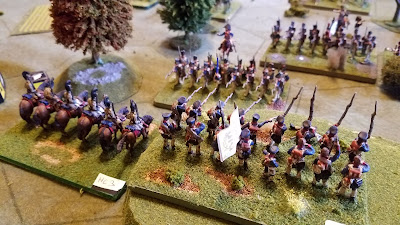 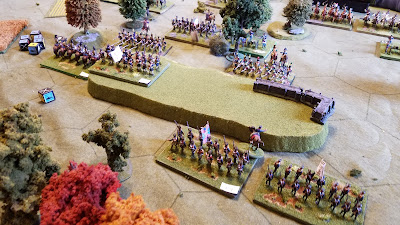 Mark's Heavy Cavalry charges into the fray!  Mark has 5 units of very good quality cavalry and they certainly earn their pay today. 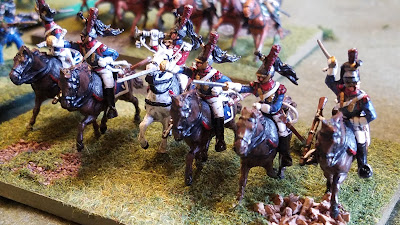 Probably worth mentioning that the victory counters are about even here and this game has been SUPER close the entire time.  Both sides are neck and neck.  10 are needed for victory and I think we both have 5 or 6 when this picture was taken. 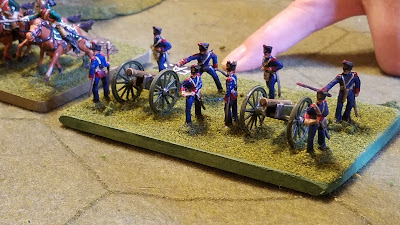 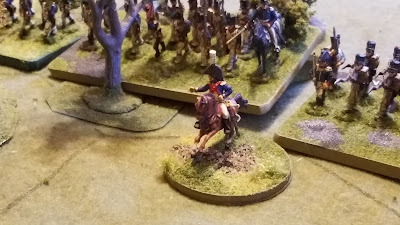 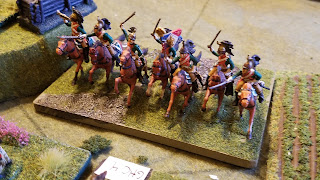 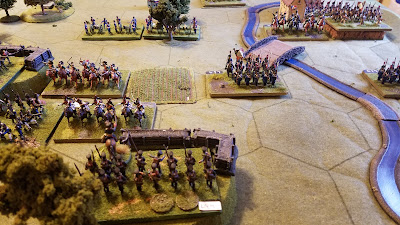 The battle pretty much from here on continues to rage around the central ridgeline and redoubt.  Ken and I are trying to feed units from the left flank over to the center but it's hard with only 1 or 2 cards!  Meanwhile Mark is doing his best to break our squares.  He eventually breaks the grenadiers' square, captures the redoubt (forcing out the officer) and gets another victory point.  A joint assault from marauding heavy cavalry finally finishes the job and Mark takes the field 10-9!  What a close run thing! 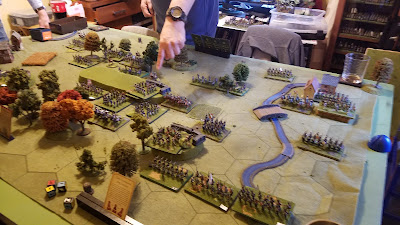 WOW What a fight!  Believe me when I say this was a nail-biter.  Both sides were neck and neck the entire game.  Mark handled the French perfectly and I have to say Ken and I didn't do too bad with the Prussians.  I was expecting this to be a "jail-break" with the French pretty much running rampant from every direction.  Not so.  The Prussians are a stubborn force and have enough good quality units to give a good accounting of themselves.

I can honestly say I've never played a CCN game quite like this before, with so much cavalry, high quality units, and dramatic reversals of fortune.  In hindsight, I definitely should have put my artillery in the redoubts to begin the game with.  Probably also should have started with more infantry in the center position, instead of the town.  In terms of moves during the game, I'm not sure we could (or should) have played any moves differently (Ken may disagree).  While we surrendered the initiative to Mark with so many units in squares, we also prolonged the battle long enough to continue to attrit the French.  If the board game (the strategic campaign) continues, we definitely took a good sized chunk out of the Corsican Ogre's Army!

This was super-fun and just what I needed with my gaming-funk.  Brian's outstanding figures and terrain are always a joy to game with.  This was a splendid afternoon of Napoleonic gaming and I am still quite tempted to single-base my 15mm units specifically to play CCN, a game that I have always very much liked.

As an interesting aside, I think I'll do a separate post on the campaign, complete with the orders I sent Brian as Blucher, and some screenshots Brian sent me of the map.  Brian has some great power-point files of the progress of the campaign.

Posted by Disgruntled Fusilier at 9:11 PM