Got in a quick Neil Thomas World War II game before work recently and found a little bit of time to blog about it.  The following is an epic clash between two World War II heavyweights using a rules set that I seriously underestimated!  These rules come from his "Wargaming: An Introduction" book.

The forces should look familiar because I've been using them in a similar scenario over and over again, trying various rules sets that I like and trying to find things that I dislike.  I am finding as I get older that I dislike 2 things:  bullsh*t and gimmicky rules features...

This scenario was beefed up a little to also include an under strength company of Soviet T-34/76 and a small platoon of Panther tanks in addition to the infantry.  According to Neil Thomas (NT), units of 8 troops are squads but I kind of changed that around so a stand was more or less equal to a squad, thus changing the figure scale a little and making the game much "bigger" in terms of units involved.  It actually worked pretty well.  Stands were eliminated when they lost all their figures.

In the case of my 15mm basing scheme that was either 3 troops for LMG equipped units or 5 troops for rifle sections.  The Soviets were much different with 4 troops per stand and a healthy mix of Submachine gun armed squads in there for good measure.

Red Army's mission is to seize the collective farm (again! - Mein Gott how are those buildings still standing??).  This time they have 2 large infantry groups to accomplish this, attacking from 2 separate directions.


The Soviet armor was careful not to approach the German positions too closely, and good thing for it, too.  The German leadership stands all had Panzerfausts or Panzerschreck sections and boy are they deadly.  Also it's worth mentioning that the anti-infantry fire is really something else here.  You get a 10 HE (high explosive) dice to fire at infantry stands, all hitting on a 6.  Then you get to roll saves.  My infantry took a beating, but the fire was not enough to get them out of the fight.

Mr Thomas has also done a commendable job working combined arms into the game in a simple and elegant way.  Infantry closing with your armor in close combat roll 1D6 per figure.  Any roll of a "6" knocks out the tank!  Watch out!  Infantry have been given the dues they rightly deserve in this rules set. 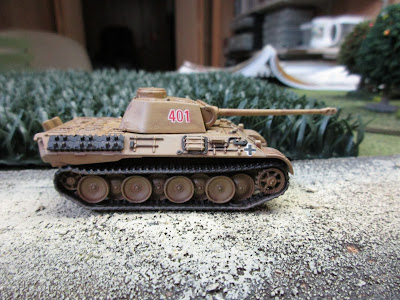 The Soviets moved as fast as their commissars and officers could urge them, taking sporadic bursts from the German HMGs are long range.  This had a good effect taking some units out of the fight prior to the battle really starting in earnest. 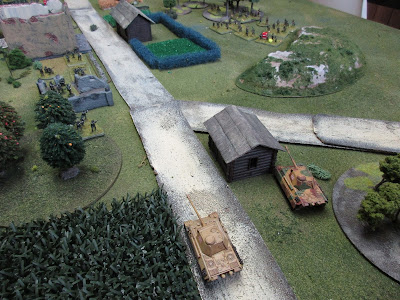 The infantry fire mechanisms are nice, too.  I experimented with rolling just 1D6 per squad, and calling it a "LMG" squad or a "Rifle" squad but that's not as much fun so contrary to my earlier opinions, I based the firing rolls physically off what figures were in the stands.  It's a little more work, but satisfying none-the-less.

You fire and your To-Hit is based on the enemy's cover.  He gets to save from your fire.  The beginning of his next turn, if he took casualties, he rolls a save and this determines his morale state.
I'm still a little unclear how units recover from that status unless they are shot at again.  So, potentially, you could render a unit pinned or neutralized (my terminology, not NT's) and he doesn't get to attempt to recover until he's shot at again?  I might be doing that incorrectly. 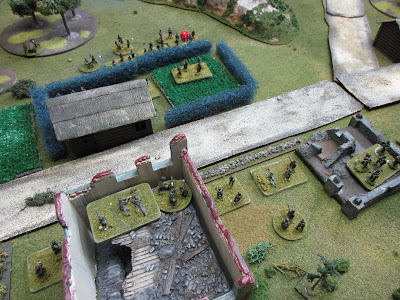 Now seems like a good time to cover the close combat rules, which were a little confusing until I reread them carefully.  Close combat is based on figure count and the current morale state of the unit. Your current morale state translates into a combat factor that is further used to calculate a final score.  The highest score wins the melee.

So NT has, in effect, given you a tool to effectively suppress the enemy prior to assaulting.  You need to force a morale check and cause some casualties prior to your assault or the enemy will be able to fight you at full strength.  This is absolutely the right way to go about things and many rules sets play this the same way; rewarding attackers for suppressing the enemy prior to the assault.  This is the first rules set I've played that truly gets this concept right. 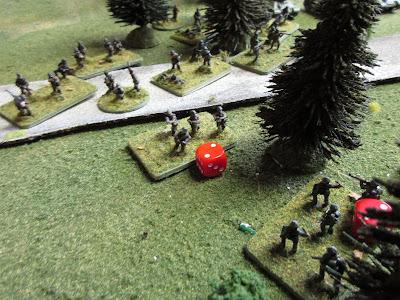 The Russians sense the time is right and go in for the kill!  They surge a platoon of T-34s right up into the German positions, careful not to contact anyone, and move more T-34s closer to expand the breach.  Their infantry is not far behind and I'm instantly seeing the benefit of tank-riders with SMGs now!  It's important to remember those Russians have no infantry support in the cornfield with them, and the German leadership have hand-held AT weapons...

The Germans in the cornfield go for broke and maneuver against the enemy armor, seeing this as their last chance to defend the objective and cause casualties.  The panzerschreck fire is deadly and KO's 2x T-34s.  Meanwhile another squad assaults a T-34 in the cornfield and knocks him out.  Along the road, a German squad breaks from cover and does the same, killing him, too.  The Russian company is reduced to 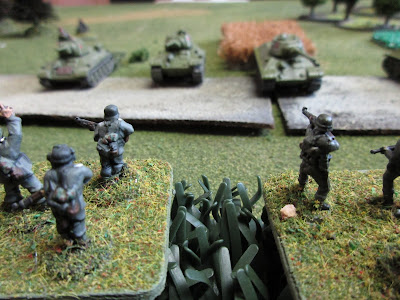 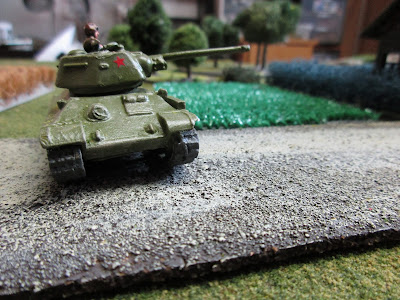 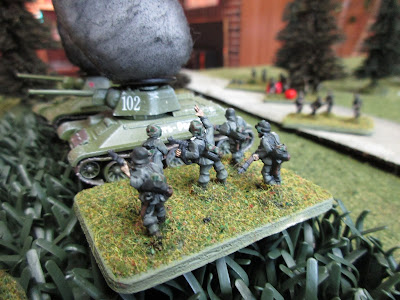 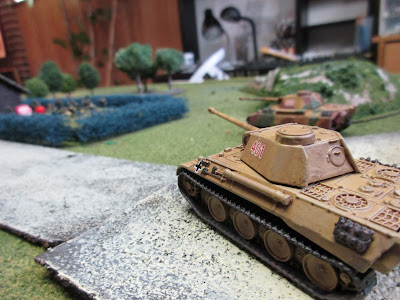 Final Thoughts: Congratulations if you made it this far!  What a great game.  I know there were a couple things that I did not do right, but these rules were full of surprises once I finally sat down to play them (I've had this book for awhile now).  I know that Neil Thomas (NT) has taken some criticism for his rules sets but overall, I really like them.  All of the ones I've played, with the exception of the WWII era "One Hour Wargame" rules, which I really feel are better for Horse and Musket, and ancients.

In these rules, you maximize play time and minimize thumbing through rules. Always a plus for folks who like "2 brain cell" rules.  Once I get a few more British units painted up, I will give his Napoleonics rules a go again.  And remember my first preference - no bullsh*t and no gimmicks!

I do think I should have played with the "recommended" number of units per side as this game had both sides with overwhelming resources.  NT's force suggestions have lists you can build with usually about 4 to 8 infantry squads or units on a side, about 3 to 4 tanks, and some supporting arms.  In this game, I used large scale TOEs with team-sized bases pretending to be squads.  Still though, a very fun game and these rules handled the extra forces with ease.

Here are some tactical recommendations to make your attacks or defenses go a little easier if you're playing these rules:

Suppress the enemy!  Shoot at him with HE fire and force casualties and subsequent morale checks.  Also, don't assault an enemy who is "fresh" ie no casualties or morale changes.

If you have tanks, you can use them as mobile fire support but dont get too close to the infantry!  They'll make you wish you hadn't!  NT gives his infantry much staying power and while they can't reach out and kill you, they can assault you if you're at 10cm's or less.  So be careful.  The Soviets lost 4 tanks in 1 turn.

Posted by Disgruntled Fusilier at 2:13 PM