My Neil Thomas Napoleonics game left some of you clamoring for more so in that vein, here is another Naps game with the same forces arrayed a little differently to suit Arty Conliffe's "Shako" using the original rules.  (BTW as an interesting aside, I have been reading through the Shako II rulebook and I have not found any differences yet between the first or second edition).  I played this game in very small "batches" of turns probably no more than 15 or 20 minutes a day... 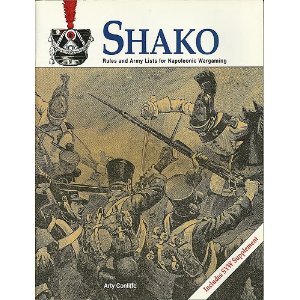 This game featured 2 French Divisions of 6 and 5 "formed" battalions and 1 skirmisher battalion each.  I decided to keep the French artillery batteries under Corps control as opposed to parceling out the guns to the divisions.  While you may not have the positioning to suit the advance, you have more flexibility in who you're attacking.  I resisted the cries of my Division commanders and gave the signal to attack....

The French stepped off in their usual fashion and made good progress, with each battalion following the division assault plan.  The problem I ran into was traffic management on the right, with battalions wheeling to and bumping into one another to move into the attack.  Some fancy footwork on the French part would have helped here and if they would have changed into column, I do think the attack would have gotten off much smoother.  It's a special feature the French have in Shako so why not use it?

British begin their artillery on the advancing French but the ballshot fails to find any good targets.  I should point out that the real success story here was the French "grand battery" used against a lone battalion in the open.  3 French guns firing ball even at long range forced a Battalion to break and flee the field, leaving a crucial sector of the British line undefended.  With no additional reserves to spare, the British division commander can only watch and let his stomach turn as the frenzied, blue lines stomp ever nearer.

Moving into contact the French find themselves in a hell of a fight.  The British fire is fierce and the French sacrifice a battalion just to claw their way up the hill to get at the British.  2 assaults against the British Battalion atop the hill are sent reeling back!  Eventually the tide of battle turns  and the British flank folds on the hilltop.


Interestingly, they fail their division morale by rolling a "1" and the entire division withdraws without orders!

tragedy in the town as the French zero in on the Portuguese units (why I don't know - their uniforms are the only thing that separate them in this particular game) and a massive assault evaporates a Portuguese formed battalion and pushes another British battalion back.


A quick word on some mechanics that I really enjoyed about Shako: the infantry combat modifiers.


Shako's argument is that your games "look" more like Napoleonic battles and I have to say I agree.  The French had units to their rear and on both sides pressing home the attacks.  With the way the modifiers (calm down, there aren't too many) work, a unit that you thought had great advantages could see those advantages negated by the enemy's modifiers, especially if he's clever about how he deploys his battalions to maximize support.  The melees went the French players' way each time due in no small part to the French deployment scheme.

The devastating attack against the town sent the Portuguese and British retiring through the town and in rough shape.  In the end, with one British division back at the start line and another retiring, the British withdrew in good order, ending the battle.

The avalanche of modifiers granted to the French for support (flank and rear support) negated the benefits the British and Portuguese held by garrisoning the town.

So there you have it.  A well coordinated, well thought out attack with skillful deployment of units can turn the tide.  Whereas on the right, a poorly organized attack which went in piecemeal relegated too much to chance, with small, individual combats and much less support.  Fascinating!

Shako delivered a cracking good game and my biggest regret is that I don't have more units painted for bigger even bigger battles.

Next up, we'll try the same game with Black Powder and see how it goes.  At that time we can compare 3 Napoleonic rules sets and see which one stacks up best!

Posted by Disgruntled Fusilier at 7:57 PM