The other day I threatened to play Neil Thomas' Napoleonic Wargaming rules and today I made good on that threat.  This is part I of the battle, which is pretty inconclusive so far but the reader will note my observations...

The scenario is a French assault of an Anglo-Portuguese held village.  There is a crossroads in the center (isnt there always?).

The French force consists of 6 Battalions (1 classed as "elite" and is in a reserve position behind the center) of line infantry, 1 light battalion performing skirmishing duties, a light cavalry squadron, and an artillery battery.  One of the battalions on the French side are my Italian volunteers.

The British force consists of 4 Battalions, with 1 Portuguese Battalion, and 2 artillery batteries, 1 British and 1 Portuguese (Bavarians standing in for Portuguese artillery until I can get my crews painted).  1 Battalion is classed as "elite" and also in a reserve status behind the village.

While Neil Thomas' rules call for 4 stand units, I dressed mine up with 6 stands just to make them "look cool."  Stand removal and shooting remain the same, I just leave 2 bases for the final stand, instead of 1.   This has the added effect of making assault columns look much bigger and more menacing...The British also have 2 light battalions in a skirmish capacity.

Prior to the battle, I was really looking forward to finally using these light troops in their actual capacity.  The results did not disappoint! 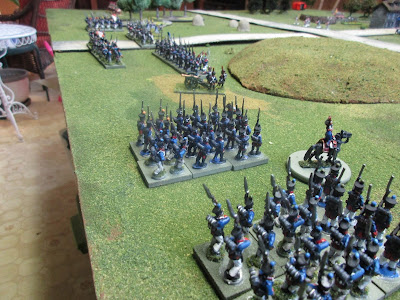 As the British player you are allowed to place hills down in front of your force.  Kind of a neat rule.  No one ever thinks to move terrain features around but this is a great feature and kind of emphasizes the well thought out British use of terrain in establishing their positions. 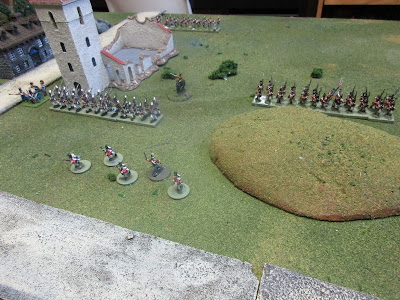 In order to get the "cloud" effect of skirmishers, I base mine individually (actually for use in skirmish games) and instead ensure that each figure is no more than 7cm's from an officer or NCO stand.  Shooting is arbitrary and not done from the figure/base like their line counterparts.  I just select their target, count the stands, and shoot.


So the Anglo-Portuguese force is all comfortably positioned to meet the French assault.  Lights to the front!  The first move, both sides send their light troops into the fray. 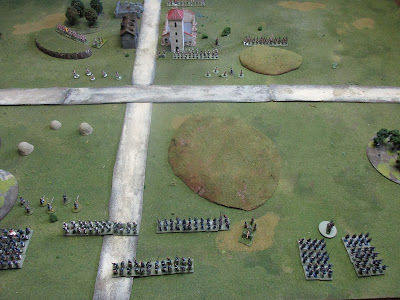 In another interesting aside, I wanted to use my French cavalry a little differently this time and kept them on the British flank in order to tie down a unit or 2.  The British site their artillery on the squadron and the infantry to their front sit tight!  That's good for the French center and right. 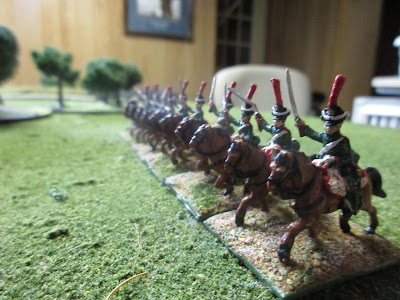 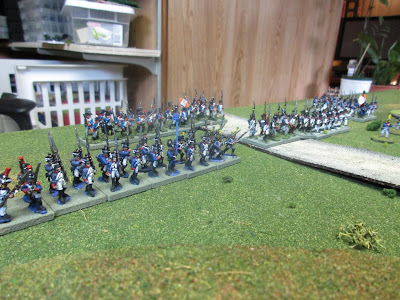 The French attack starts off very slowly.  NT's no interpenetration rule is a pain because some of my Battalions get stacked up advancing and I can't move them as far as I'd like to. 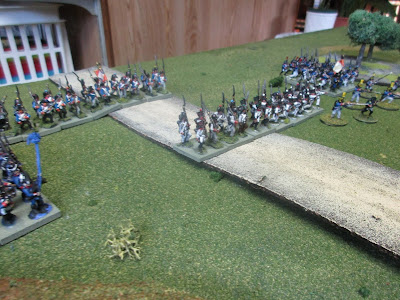 The skirmishers trade a lively fire and the British patrol casualties mount.  For now, most of the casualties have been light infantry from both sides although the British sting the French right as they have no skirmisher support.  Their assault columns march straight into accurate fire from the British skirmish patrols.  Even the Artillery takes some losses as they set up atop the hill. 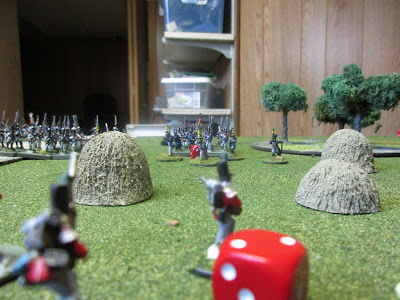 The French need to start picking up the pace and assault the Skirmishers on their right, starting to clear the way for an assault.  1 Battalion by-passes the combat and continues onto its objective, alone.

NT gives you 2 options when you lose a melee - you may retreat 6 cm's facing the enemy, or 12 cm's with your back to the enemy.  Naturally the British lights take the former option, opting to fire at their pursuers every step of the way. 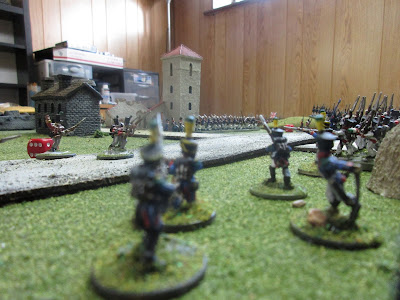 The British let loose a volley into the French on their left hitting on a 3+ ouch!  The French have numbers but the British have their platoon volleys.  The battle could go either way at this point.  The French plan is to assault the Portuguese until in the town and the British Battalion on their right simultaneously, keeping 1 battalion back to reinforce whichever battalion wins this next fight.  The Center units will demonstrate against the British left along with the light cavalry, and advance against them if necessary.

This will depend on the combat that is about to take place in the next few turns!

So far the artillery has not claimed any casualties yet - too much long range fire.  That will change shortly. 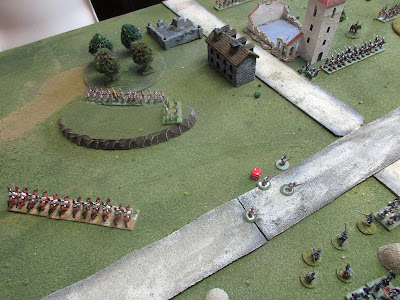 Posted by Disgruntled Fusilier at 4:15 PM