The Neil Thomas Napoleonic Peninsula game was finished last night will telling results! The French closed to assault the British positions along the line.  The attacks occurred staggered from right to left and in that order.  The assault on the French right (British left) went in first and succeeded in pushing the British off of their position, only to be swiftly counter-attacked by the British and pushed back off the hill!


The French commander is starting to get nervous.  Even with all the battalions up front, his musketry is not forcing any of the British or Portuguese from their positions and the first assault did not go his way...

The elites switch to column along with another battalion.  It's a hard day's work in the Peninsula! While I forgot to take pictures of the action, the Royal Artillery scored a major hit against the French Cavalry on the French left and successfully kill 2 stands.  They fail their subsequent morale check and lose another stand prior to "going in" and charging the fresh British infantry on the hill.  The cavalry unit evaporates! 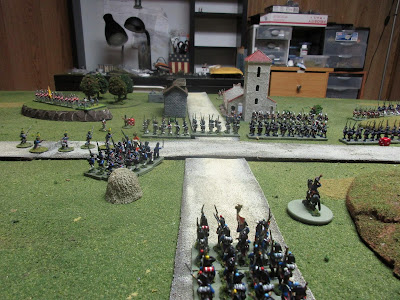 Where is our artillery?!?  The French commander cries.  The battery starts to move up, hoping to blast the Portuguese and British out of their positions. 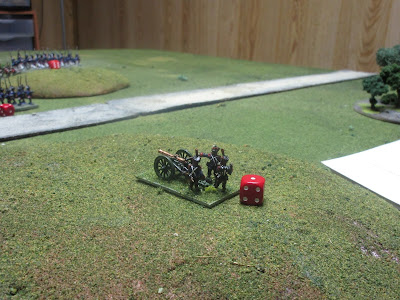 Morale problems start to enter the picture now as the Italian volunteers start taking hits and more and more stands evaporate (Levy pass their MC on 5+).

Feeling the moment right and seeing nothing but dead horses and cavalrymen to his front, the British commander moves the Battalion on his right forward to start putting pressure on the French.  He has no idea that his troops are in much better shape than them! 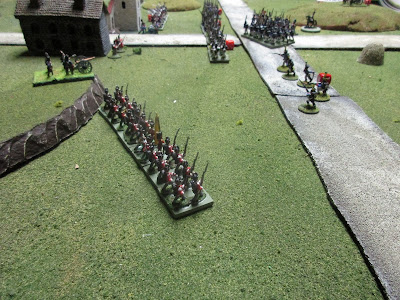 The French commander sends in his most elite troops to assault the Portuguese directly and they are repulsed!  It seems like nothing can dislodge troops who are in towns!  Another Battalion forms up to assault the town but the British artillery also have something to say about that. 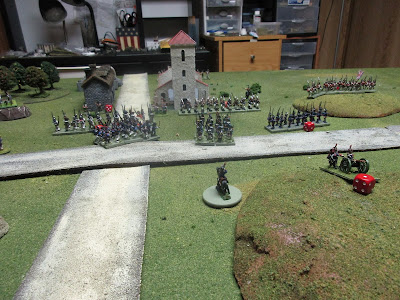 The Italians quit the field thanks to combined shooting from the Portuguese artillery and British lights, leaving one of the French assault columns exposed to British artillery.  They lose more stands and the French decide to quit. 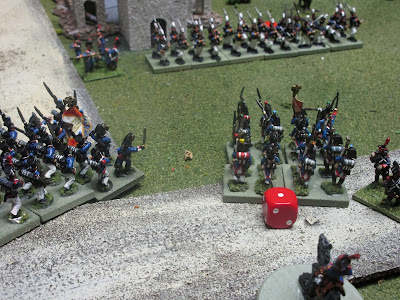 Final Thoughts:  This was a good game - very hard fought although I have to say the way shooting and combat was going, I didn't doubt the outcome.  British muskets are deadly in Neil Thomas' rules and going straight up against them without flanking or extra artillery is asking for trouble.  With the numbers, I wonder if the results would have been a little different with NT's "regular" Napoleonic rules in "Wargaming: An Introduction."

I would like to try this exact same scenario with NT's rules from Wargaming: An Introduction.  With my megalomania, I'd also like to try it out with Rank & File, and Black Powder and see how that goes.  Of course with Cold War stuff in full swing, that's if I ever find the the time!
Posted by Disgruntled Fusilier at 10:47 AM