Usually "the Christmas offensive" is a World War II battle that I play close to Christmas or on Christmas day if I have the time.  This year, as part of an ongoing Napoleonic rules-testing series of battles, I experimented with various Napoleonic rules sets in order to see which ones I like best. 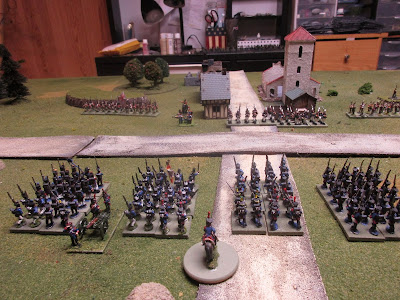 
I won't talk about the comparisons now because I want to talk about the Black Powder game I played first.  Then, in a later post, I'll compare and contrast these 3 rules sets from a standpoint of what I liked versus what I didn't like about all of them.
THE BATTLE
This battle has the same TOE as the last 2 Napoleonic battles I played with 2 Brigades (or 1 Division in the case of Shako) attacking a town held by an Anglo-Portuguese force.  The French start out strong with good rolling as their force were mostly arrayed in columns thus the command receives a +1 to command values for placing them in such fashion.  This almost guarantees that they'll receive multiple move orders in a turn.  They do, and are almost at the village before the British turn even starts!

The French have the benefit of multiple units which is good because there is a heavy foot battery on a hilltop waiting for just such a target to come stomping through the tall grass...  One of the French columns receives a healthy dose of ballshot as it advances ever-closer to the British lines.

The French lights move in (one of the first times I've used "small" units in BP) against the British to start softening them up.  As an interesting aside here, the British Brigade on the left failed its command roll and their own skirmishers sat idle while the "French devils" ran all across their Brigade's front, picking off soldiers and officers alike.

The British adjust their right slightly and Portuguese artillery opens up with disappointing results against the densely packed French columns.  You can hear the drum beats and chanting of the French as they approach through the fields. 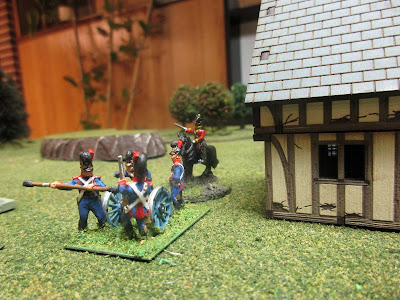 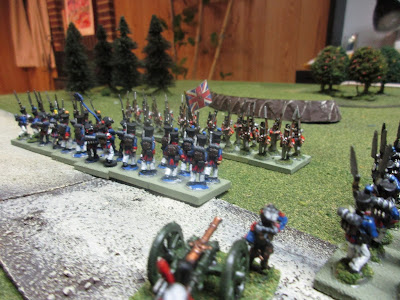 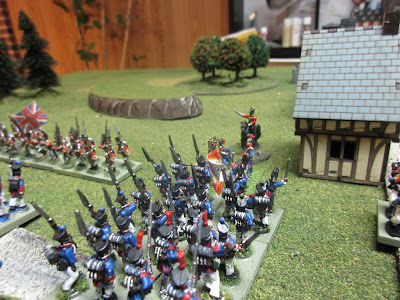 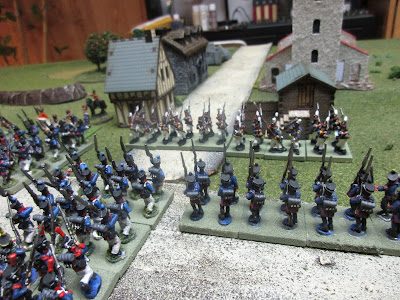 There were a few rules questions which I was easily able to answer here and again I applaud Black Powder due to its simplicity (and prose in the rule book although that same prose is awfully annoying if you're an impatient person like me, just looking for an answer to your question!). 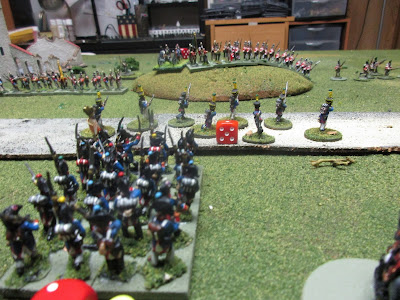 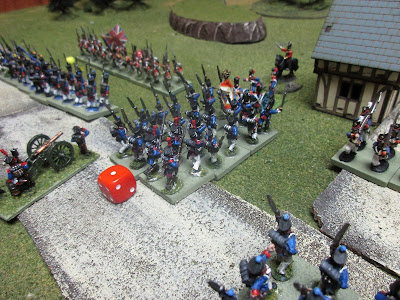 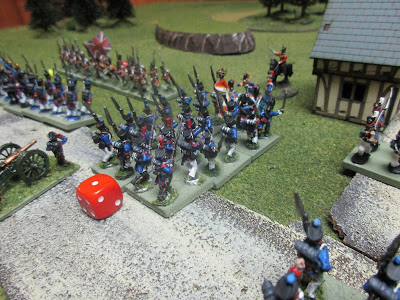 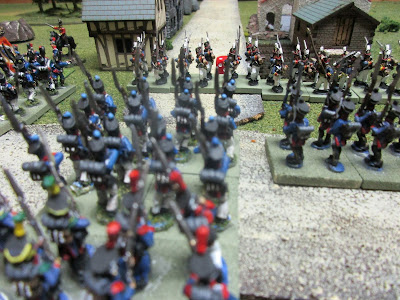 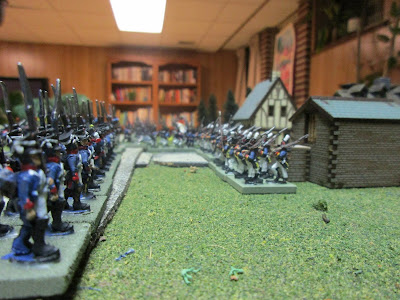 The one striking thing about Black Powder I noticed was that it would probably handle larger, much larger battles with ease, especially if you have multiple players handy.

the French close on the British and on the French right, against the hill, French columns are stopped cold by merciless British musket volleys.  Unfortunately for the French, their foreign volunteer Battalion, placed in the Brigade reserve, has not received its order to move and the command starts to lose its grip.  The Commander places himself in a more advantageous spot so he can coordinate the second wave.  To the division commander, it seems as if the attack against the British held hill is simply a demonstration now, and the main effort against the town must succeed! 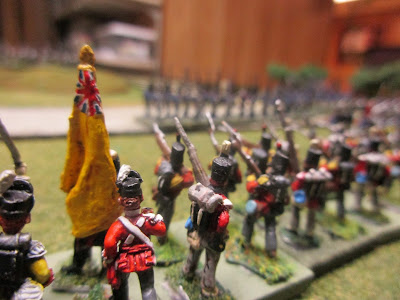 And succeed it does!  This time, the French try out a different trick by placing 2 Battalions in line to trade volleys with the Anglo-Portuguese force in the town all while bringing up assault columns alongside them.  The assaults go in with elan and the Portuguese artillery battery folds quickly, and a British Battalion is pushed back out of its position. 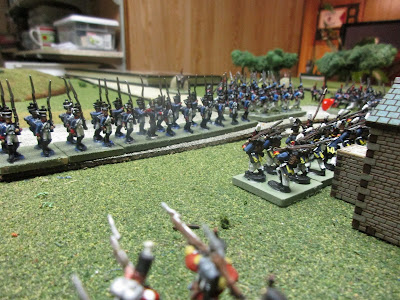 The subsequent breakthrough charge allows the French infantry to advance further now into the village, placing the overall British command in peril!  Black Powder says if the command is threatened they must join the nearest unit and they do - at a gallop! 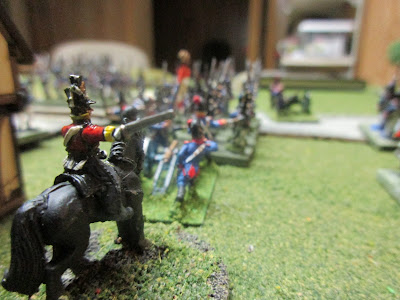 The French battalion slices a wedge in between the force defending the town, who are now in very serious trouble.  The next move sees the French fire on the remaining British battalion from all sides. The British battalion evaporates and at this point, with the British division split (even though the all-British force is holding the hill top still) I decided to call the game. 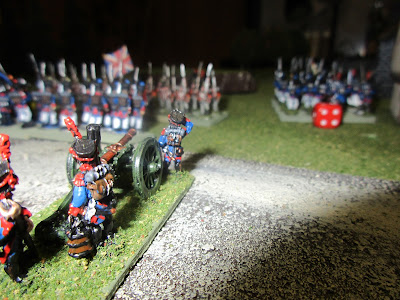 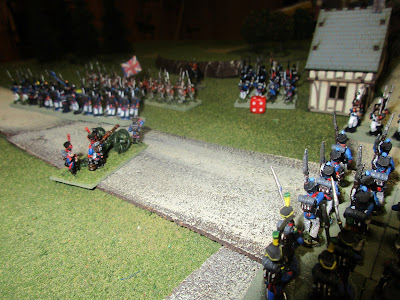 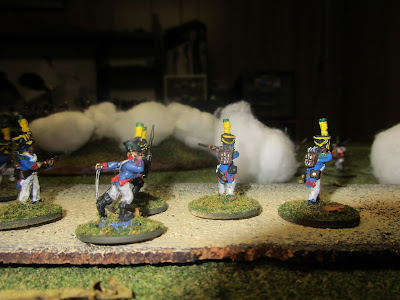 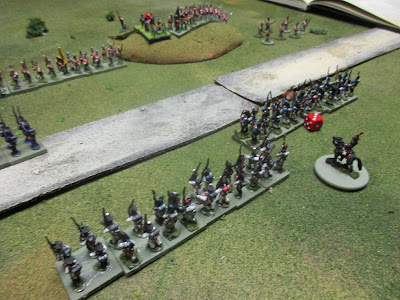 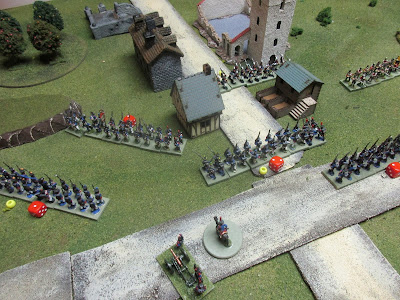 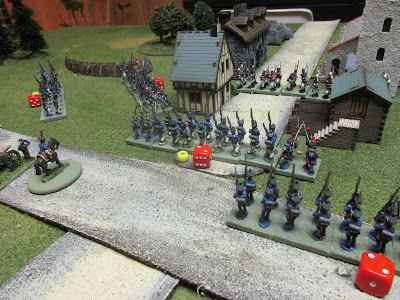 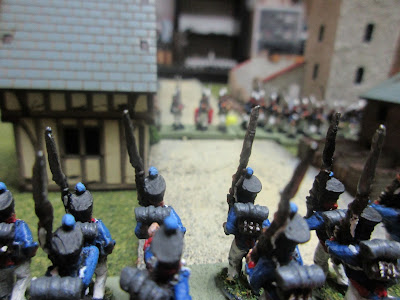 First of all, I really enjoy games of Black Powder.  It's easily one of my favorite "horse and musket" era rules sets.  Besides satisfying results from combat, Black Powder delivers a level of excitement that goes beyond the "old school" approach (such as rolling and stand removal, huge accounting sheet lists of modifiers, etc).

While I admit I have less of a taste for "gimmicks" and "bullsh*t" in my rules, Black Powder gives you a decent command mechanism that works "much" of the time.  That said, for whatever reason you want to attribute it to, your troops won't always comply with your orders.  I'm ok with that as the command roll mechanism is not overpowering (although I've played games where there were units who never moved throughout the duration of the game due to my crummy rolling).

The rules answered many of my questions throughout the battle, leaving only a few left unresolved (break tests after melee combat for winning units anyone????).

Another thing I like about Black Powder is that it produces a great "narrative" of the battle, as evidenced by this lengthy post.

I like that shooting is done with 3 dice.  I also very much like the concept of "disorder" being separate from casualties.  For instance a unit can save all its casualties and still become disordered, rendering them unable to carry out an order during their turn.  The general concept of disorder, morale, and cohesion in real life is so abstract it's very refreshing to see it handled in such a nice and simple way in a game.

Also another nice thing is that units recover automatically from disorder.  Again, a great mechanism for large battles.  (and it lends itself nicely to "eye candy" on the tabletop just like Bolt Action - you can come up with neat markers for disorder I would imagine).

This battle also saw the French win the day which was refreshing but in all honesty things in the village could have gone either way.

As I said before, some of the prose in the rule book is funny if you're reading it before bed or to refresh your knowledge of the rules.  Not so much during the heat of battle!  It was downright annoying when I was madly flipping through page after page to find out what happens to a command stand that's over run (I found it, BTW).'

It does seem that BP is built for larger battles, and that you need lots of units painted up to have a better gaming experience.

Final Analysis?  Black Powder is a solid game that delivers satisfying results in a reasonable amount of time.  It has built-in tension and excitement with the command mechanism and break tests, as well as a great method for incorporating friction /disorder on the tabletop.   Huzzah!

stay tuned wargaming fans - the "State of the Hobby" post as well as some interesting ideas for gaming in 2016.

Posted by Disgruntled Fusilier at 12:19 PM