Yesterday afternoon I finally got my new 10mm Seven Years War troopers into the fight and played one of my favorite "grand tactical" rules "Eagles Cheaper Than Brain Cells" or more commonly called "Eagles" by folks who play it.  "Folks who play it" literally being Alex and I...  You can do a quick search on my blog for the rules as I have a tag (at the bottom) that should bring up the other games we've played.  All of them were nail biters and all of them were chock full of grand tactical decision making, resource management, and see saw combats.

Originally meant to be a Napoleonic game set at the level of Volley and Bayonet, Grande Armee, or Blucher, Eagles was an idea for a grand tactical "spin" on Neil Thomas' One Hour Wargames.  Alex and I played a bunch of Napoleonic games of Eagles and you can check them out and play them by going here. or download them here.  They work perfectly well with the One Hour Wargames scenarios.

Given the largely abstract level of Eagles, it wasn't hard to come up with a Seven Years War version of the rules with very minor changes which I'll discuss in the batrep.

The scenario is simple.  The Prussians must seize the town in front of them and hold it.  The Austrians must negotiate their forces around a number of forest terrain features and capture the town from the Prussians.

One of the neat things about Eagles is you distribute your orders BEFORE you roll initiative, and so you may not get to execute the orders the way you think you will.  There is also a cool mechanism where if you do NOT have the initiative but have an order, you may be able to use that order to react to a charge (defend or countercharge cavalry).

I experimented with an order where if a commander is touching as are multiple stands, they could all advance or move with a single order.  It worked ok.  More on that later. 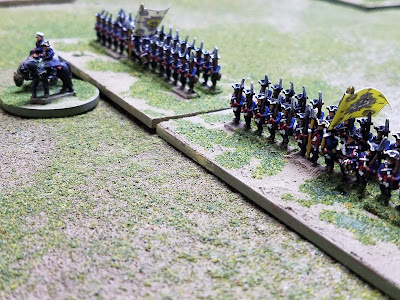 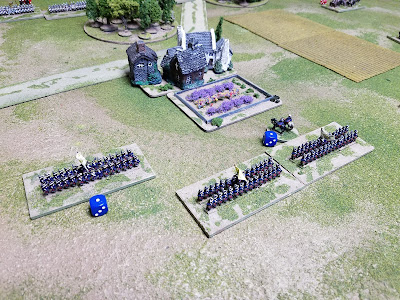 One of the SYW mods Alex came up with was "plodding" units can only turn after their move.  This severely restricted teh Austrians but it felt very realistic.  It makes deployment extremely important. 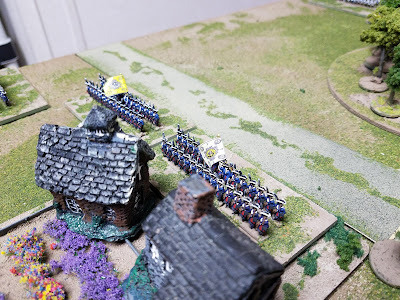 Enforcing the "plodding" trait on the Austrians, they have a very hard time positioning themselves to assault.  The Prussians did not suffer from plodding, and could turn at the beginning of their move.  I also did not allow interpenetration which was another huge restriction on the infantry forces.  In the napoleonic game, interpenetration is completely allowed providing the moving unit has enough movement to clear the non moving unit.


This was a fun and quick game and only makes me want to paint up more of these single-based SYW unit.  In addition to Eagles, I'd very much like to try Black Powder and Honours of War with these units.  Stay tuned!  Perhaps I can convince Alex to work on a "Battalion level" version of Eagles where a unit is a battalion!  Imagine the possibilities!

Posted by Disgruntled Fusilier at 8:30 PM