After posting some modifications to Neil Thomas' WWII rules from his "Wargaming: An Introduction" book a few weeks ago, I thought I'd put some troops on the table and try the mods out with a bigger force.  I also wanted to see if I could "dress up" a table for 6mm and make it look nice.  Hopefully I achieved that!

I used the force builder from the army lists in the book with the German list coming from 1944 and the Soviet list coming from the 1943 list.  I played the "frontal assault" scenario, which pits 12 attacking units against 6 defending units.  I forgot to dig in 1D3 defending Germans, so the Germans really had a tough time...

*I didn't count either of the barrages as units in this case and I counted the German AT gun and HMG section as 1 combined unit.  Also, German squads have Panzerfausts - super deadly for tanks.

The Soviets start 30cm into the table at start, and the Germans may start up to 60cm into the table.  In true solo wargaming fashion, I came up with the Soviet plan and the German plan looking at a map of the terrain.  The Soviets decided on a broad advance, using the open valley between the woods for their armor and tank riders.  The goal is to assault and capture the gardens.  Their infantry will slog through the woods and take the bordered fields.  This will give them more cover on their way in.  Pretty obvious plan.  If you're the defender though, it's not so easy to plan against.

The Germans have a crucial decision to make since they don't have alot of forces with which to defend.  Defend up front, or conserve strength for a counterattack.

In the town there is the tripod mounted MG42 section and a reserve infantry squad to reinforce and/or counter attack.

The Soviets split into their assault columns and step off, using the speed of the T-34 to close quickly.  The Soviets use all 24cm of their movement to cross the field and there is no one to call in the waiting 122mm guns from division. 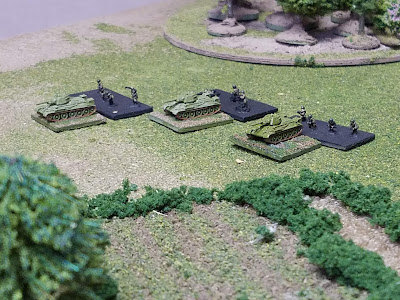 The German tankers are all experienced and know exactly when to open fire against the Russians.  They've seen it all before.  Peering through their gunsights, they can make out patterns of rust and dust on the glacis of the T-34s.  It's time!  "Achtung, all ghost elements, open fire!"  Wetzel calls for artillery on the lead tank and it lands with devastating accuracy all around the lead T-34, scattering bodies of tank riders all over the place.  The Panzers shoot and one hits the middle T-34, knocking it out.  The Soviet return fire is nasty.  The Germans have given their position away.  "Hauptman, shall we displace?"  "Nein.  Keep shooting.  Don't displace until you've killed those tanks."  Wetzel got greedy.  It was a critical decision...Uncharacteristic of the Soviets, the T-34 platoon stops, turrets seeking out their German enemies...


German nerves run out.  Panzer 213 fires and misses its target, unbelievably rolling a 1.  The infantry attempt to inflict as much punishment on the tank riding Soviets as they can.  The Soviets reach the road in front of the gardens.  The Germans can hear them barking orders in Russian even above the staccatto chatter of the DPs and MG42s.  The men prime grenades and ready their entrenching tools, fixing bayonets as well...

The Soviets surge forward, dropping the tank riders as they go.  A fresh squad moves into contact with the Germans who bolt after unleashing a handful of grenades.


After capturing 1 objective, the Soviets now must also make a decision.  Do they go for a quick victory and secure the village now?  Or do they stick to the plan and take the cocked field as planned?  What would you do?  What do you think the Soviets would do?

Stick to the plan.  The Russians boil out of the woods on the German's right.  The German Pak 40 AT gun opens fire at the T-34 and completely misses every shot, rolling 1 after 1 while the infantry open fire at the squad supporting the AT gun.  Their HMG never even gets into position the entire battle.

Soviets open fire with the T-34 and numerous infantry squads on the defending German squad in the hopes of softening them up for a ground assault.  The German defense is melting away as the AT gun is knocked out, its prime mover also takes an HE round from a T-34 on the left flank!


Meanwhile on the German left, the stricken squad in the cabbage field regains some of its courage and opens fire on the Soviets bunched up in the garden.  the lead Squad takes a punishing volley and fails its morale and the angry Soviets open fire with 2 other squads.  one of their T-34s gets a little too close to the cabbage field and is knocked out by a panzerschrek.

The Soviet commissar is furious and orders the platoon forward to assault the cabbage field.  The Soviet squad fans out.  They take more hits from the MG42 position in the village but keep coming. 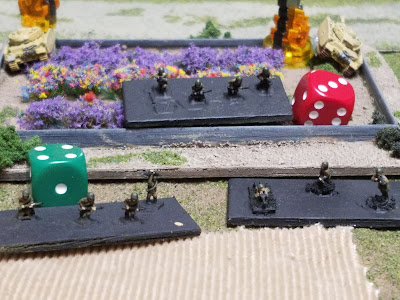 Hauptman W knows his time is up.  The only way to keep this battle going and buy time for reinforcements is to re-capture the cocked field.  Instead of breaking contact, he sends the reserve squad forward.  they immediately come under fire by units in the garden.  Knowing what is up, the Soviets are not going to let an errant squad of landsers steal this victory from them.  Their unit has penetrated the furthest into fascist occupied Europe so far!  Nothing will stand in the way of the liberation!

A T-34 crawls into the cocked field to seize it and end the game.  "not so fast, Ivan!"  the reinforcing German reserve squad kills it with a panzerfaust hit!

The Soviets decide to end this game once and for all.  they sweep into the cocked field and overrun the German squad there.  They also knock out the MG42 position in the village which will end the game.

The modifications worked well and I think sped the game up quite a bit.  Infantry units have fixed shooting, regardless of casualties which moves the game along nicely and is less fiddly.

Talking about the rules themselves and play style, the German plan definitely did not work out as anticipated.  In these rules, tank guns are decidedly lethal among similar classes of tanks (medium tanks) and timing is everything.  These rules really reward aggressive and proper use of combined arms and infantry.  Getting tanks too close to infantry is asking for tanks to be knocked out.  Softening up an infantry position before assaulting it is also critical, as it should be.

I ran into some weirdness with tank riders but I think I figured out how to play with them and target them while they're riding on the tanks.

I think the home grown "special" rules worked well with giving the Germans 4 fire dice instead of 3.  I think having a command stand or FO stand would be nice as well.  There should be command and control rules for the russians a la Crossfire where LOS is necessary to a leader stand to act for centralized armies and I might play with that a bit.

I thought I would enjoy this game in 6mm alot more and my final opinion is, it's much better in 15mm.  I can't explain why that is, but the troops come to life so much more with 15mm stands or bigger on the table for these rules.  I will save the 6mm stuff for Flames of War.

There are some things the rules don't address and i will need to come up with fixes for:

How many hits does an HMG stand take?  (personally I like Alex's home rule here and will co locate HMGs with an infantry squad as that is much more doctrinally sound)

Am I doing close combat correctly?  That could be a blog post in itself.  also - what happens to an attacking infantry squad that assaults an AFV, rolls all its dice, and doesnt roll a "6".  Does it fall back?

The answers to these and more hopefully coming soon.

I have to admit, it was fun to have a "proper" wargame for the first time in awhile.  I'm trying to continue this Neil Thomas trend and will have another surprise for you all hopefully soon with a fav, home-modified set of rules I haven't played in awhile.  No idea when I'll be able to post this, but stay tuned and stay healthy!


Posted by Disgruntled Fusilier at 11:09 AM