The last couple days I've been basing them and today I'm about done in between feeding the baby....

Anyways about 430 figures, Prussian and Austrian, and were all bought long ago as part of my Lobositz project.

I met a very nice gentleman at Historicon whose painting style was very neat and who had good prices compared to the "artistry studios" out there so I gave him a whirl (one fine studio wanted 2.25 per painted figure!)  With my sluggish pace of finishing Battalions and Regiments, there was simply no way I could have finished these projects anywhere in my 30s.  I gave in and mailed them to him and I am very glad that I did.  Now I can actually play with them!  As in real games!

I will say I am probably going to dip or ink them.  But by and large, I'm very happy with them and can honestly say I could never have completed this project on my own in 5 months.

Having based almost all of them now, I'm wondering about how I will base them.  I sent them off, organized into 24 figure "Battalions" or "Regiments" if you will, but my megalomania wants to game all of Lobositz so I very well may have to do 3 stand units.  I could probably get away with 4 stand units if I shave off a few regiments here or there... 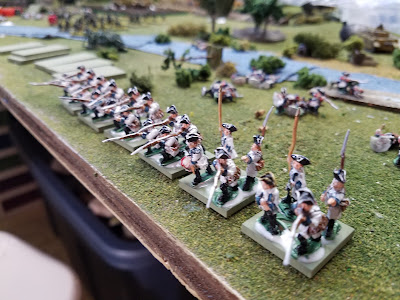 If I can manage 4 stand units, they'll look convincing enough for Black Powder or even Rank & File.  Or I could use Simplicity in Practice and play the whole battle in about 1.5 hours!


Since I already had 3 Regiments for both the Austrians and Prussians, these guys make a handsome and welcome addition to the force.  If I'm playing Volley & Bayonet, or am willing to play Black Powder with small units, this force is pretty much all I will need to refight the battle of Lobositz.  Personally, I like the idea of trying it out using "Simplicity in Practice" rules by Neil Thomas as they give a quick and interesting game. 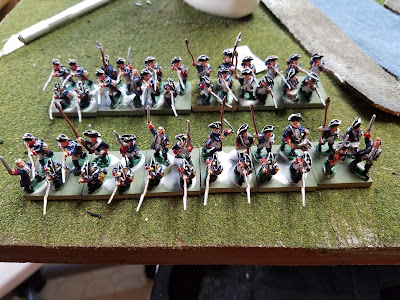 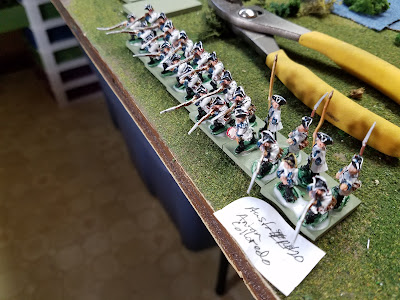 Anyways that's it.  I am going to send my remaining 15mm Napoleonic figures (French, British, Portuguese, Spanish, and Bavarian) to him next week!  Very excited about that!

In the middle or reorganizing all of my stuff now, as well as finishing up the 1019th Rifle Regiment for Rapid Fire.

Lots more progress to show off in the coming days.  stay tuned!

Posted by Disgruntled Fusilier at 7:09 PM