The second installment over as many days in my "Fighting Retreat at El Perez" scenario played out using Neil Thomas' "Simplicity in Practice" rules which I enjoyed very much. 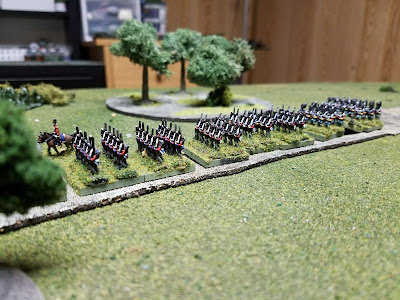 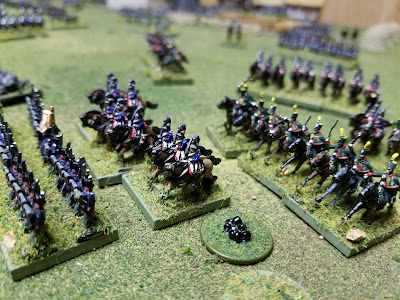 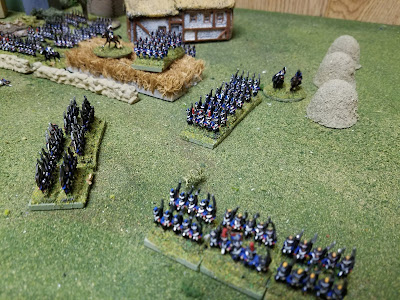 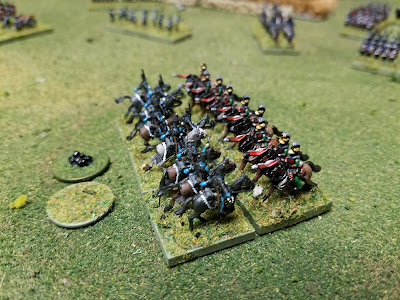 I have to say one thing, Cavalry is intended to go after weakened units in this game.  That much is obvious.  Charging headlong into fresh, formed infantry doesn't typically end well in any of my Neil Thomas games.


The French deployment is still underway and slow but the lead battalions are taking a beating from the firing.  2 British Batteries are hammering the French as they emerge from the village.  At this point, a wasted opportunity as I should have the Cavalry to attack the British battle line.  Instead they indulged in a fool's errand by chasing down a British column and mixing it up with a fresh, solid Portuguese infantry battalion.


Almost forgot there's a French artillery brigade moving through El Perez also.  Too little, too late!  The French could not bring enough firepower to bear to inflict enough damage on the British line and Battalion after worn Battalion broke themselves against the "thin, red line."

Lovely little game and a great set of rules well worth the price (only $ 3.75 US).  My observations after "finishing" this game?  Well it's frustrating to try and attack but the French really didn't have an easy time coordinating their force to attack.  The British enjoyed interior lines with massed firepower pretty much guaranteeing 2 or 3 battalions were shooting at the lead French units when they crossed the stone wall.

The French "should" have swung that powerful cavalry brigade around and hit the British flank.  This game features NO modifiers which is also extremely appealing.  Instead you add dice to your original throw, adding 2D6 per advantage.  That's huge in some circumstances when you have supports, less DPs than your target (already +4 dice on your throw) and the fan produced variant allows +2 more D6 for having a general officer within 10cms of the combat!

I enjoyed this game very much.  "Simplicity in Practice" would be literally perfect for a refight of Borodino, Austerlitz, or Waterloo where you have huge forces on the table.  I believe it can handle the units and there isn't alot of "mental gymnastics" involved during play.  In fact just enough to make me happy.

I believe, far more than Neil's Intro 2 Wargaming or One Hour Wargames, THESE rules would be the best possible rules to introduce folks to the hobby. They are both challenging and easy to learn.
Mission Accomplished!


Posted by Disgruntled Fusilier at 7:04 PM