So for those of you hoping "the good guys win" you'd better skip this post!  I actually feel bad as many were looking forward to the second part of the battle but the "second part" of the battle didn't last long...
The Americans, true to form, kept their good dice rolling for orders and were able to swiftly move through the woods right up to the German objective. 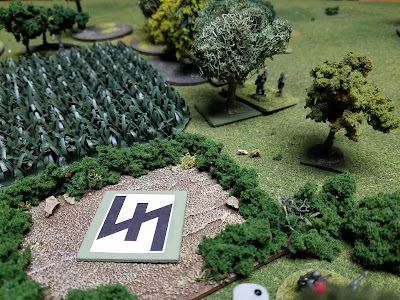 The Germans, true to form as well, busted their reserve roll each turn so the Tiger and other infantry platoon never materialized.  The Germans were forced to make due with what they had.  Their tenacity made up for lack of numbers!
The Americans gambled on a lightning fast assault of the objective from the cover and concealment of the woods and their order dice enabled them to get into position without any trouble. 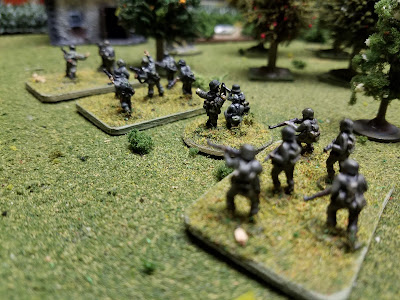 Unfortunately for the Americans, their .30 cal fell behind and was not able to set up in time to throw some fire on the objective so this was, for all intents and purposes, a "hasty assault."

Also, this was one of the first games where I used the chit draw system.  As you can imagine, with all these platoons out there getting KO'd, there were quite a few chit draws on both sides.  The US player's break was calculated at 14 and the Germans at 18.  At the start of turn 3, the US player was already at 13 and the Germans still held the objective which meant another chit draw (the Germans if you must know were only at 11)....Now they may have drawn a "0" chit, but who knows.  I really wanted to carry out this assault if anything for the practice!

So the Paratroopers did what they definitely do best.  "Close with and destroy the enemy by fire and maneuver"  Well they did almost all of that.  The "close with" part they have down pat.  The "destroy the enemy" thing we'll need to work on.


The US troopers dash through the terrain just as Gerry's rifles and LMGs open up and start tearing them up!  Too late!  Prime that grenade, grab your E-Tool and let's go!

I get into close combat with only 2 teams but there are others up there for support behind them.  Now call me crazy, but this latest version of HOF, I found more difficult to follow the Close Combat sequence from the last one.  Admittedly, I'm a bonehead so that might have something to  do with it, but for some reason this was more confusing for me this time, and last time I was on the Eastern Front with a shedload more teams in contact!

The 2 sides tie their "hits" and we have to roll another round of Parry / Thrust.  The Ami's get the worst of round 2 and end up losing teams.  At this point, both sides in the combat sat down, pulled out their scorecards and tried to figure out who won.  "Fritz, throw your pencil over the hedge, bitte.  I lost mine in the melee!" 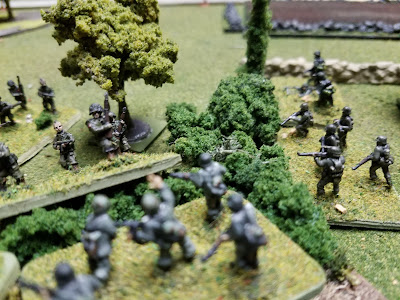 The math says this round goes to the Germans and that's a wrap.  The remaining US teams withdraw to the edge of the woods.  The paratroopers fail their subsequent morale check and bug out.


So that's it.  sorry to disappoint everyone I know this post series wasn't very long but the game had a combined total of 4 turns.  Granted, I only had a small number of understrength units on the table, but it still made for some good fighting on the table.

I like the things that Hail of Fire lets you do - the sense that you can gamble with momentum like in Crossfire is very appealing.  I know it will take me at least 3 turns to get to the treeline.  Do I risk getting stuck in the open?  Or go for broke?  Should I spend a turn trying to suppress that MG position before stepping off?  Is there an enemy unit in those woods?

These are all questions make you ask, and it's appreciated that it does.  The approach to turns and orders is novel and works out nicely.  I love how shooting is handled and frankly in that regard, HOF goes "Flames of War" one better in terms of simplicity and effectiveness.

The cons?  Well not too many of those.  I understand and am grateful for Brandon F's desire to keep the rules as short and concise as possible but I think I need to go through them with a fine toothed comb and extract some pertinent things for my own "cheat sheet" as I am finding there are too many details and things I'm overlooking during solo play.  This is not a shortfall of the system, just my own quirks.

I probably need to "practice" melee a few times to ensure I'm getting it right.  Same with the hidden unit placement rules.  They are a little confusing to me (the execution of revealing units, not the idea).
Also, inherent leadership casualties.  In this game, leadership was close to the action and inevitable got hit and killed.  What happens when the company commander is KO'd?  These are some questions I've got to troll through the rules to figure out.

All in all, an awesome game that I will continue to play more with more varied forces and bigger battles.  I think it scratches that itch for company sized battles and does give an appropriate feel of command at that level.  What more could you ask for?  Go to Wargames Vault and download the Beta version now and get playing!


Posted by Disgruntled Fusilier at 7:26 PM