Reading over various folks' blog posts about rules and in light of this past month's quest to find a "staple" set of horse & musket rules, I came across a "relatively" obscure set of rules that Mr Neil Thomas wrote for "Battlegames Magazine" in 2010.  I bought the back issue ($3.75 on Wargames Vault) and discovered a very interesting, challenging, and engaging set of Horse and Musket rules that seem to bridge his "Introduction to Wargaming" rules with his "One Hour Wargame" rules.  Given the name, I don't need to tell you how simple they are - but simplicity aside, they are a joy to play.

Basically, if you felt that OHW was too simple, or that his I2W were too involved, then these might be for you.

They hone a simple, universal sequence of play that will be familiar to any Horse & Musket enthusiast:  Move, Shoot, Melee.

Units shoot based strictly off their type.  So "Close Order Infantry" have a "To Hit" value they must achieve, as does Light Infantry, Artillery, and various types of Cavalry get to shoot too (not effectively mind you, but it's still fun to shoot with your units).

I played the "Fighting Retreat from El Perez" Peninsula scenario in Black Powder last night before bed with my 10mm troops.  Like many of Neil's rules, these seem to favor the defender, but in retrospect, I probably didn't make some good choices, either.

It's important to note here there is absolutely no distinction between column or line.  I simply put the French troops in column to get them through the town.  On their first "normal" move after the difficult terrain, I placed them back in line at no cost to them. 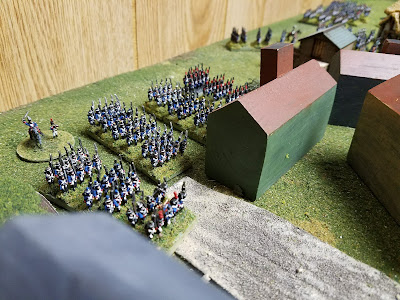 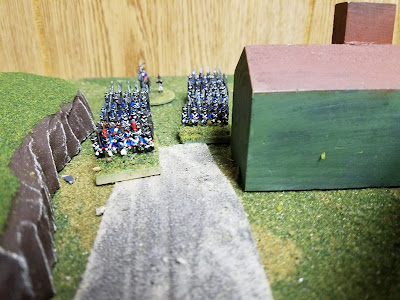 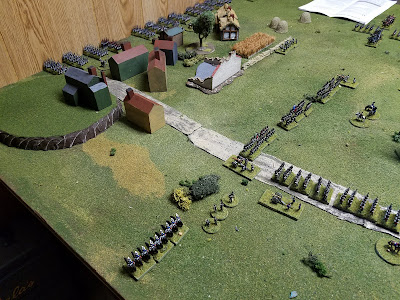 At this point, the British heavy dragoons launch a pre-emptive charge because they're impetuous Cavalry and that's what they do!  They are repulsed by French Heavy Cavalry in the first serious clash of the battle.  Losers of melee automatically retreat with 2 Demoralization Points. 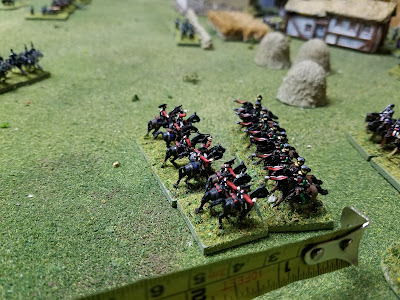 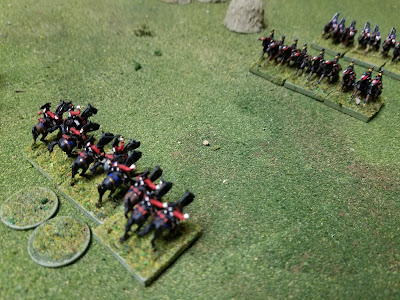 One thing I'll note is you get additional dice as melee advantage.  NO MODIFIERS!!  That's a big plus for some of the guys I game with.  So you could, potentially roll 6 or 8 dice in your melee attack with the right supports and leadership involvement.  It also has the added benefit of making your battlefield "look" napoleonic. 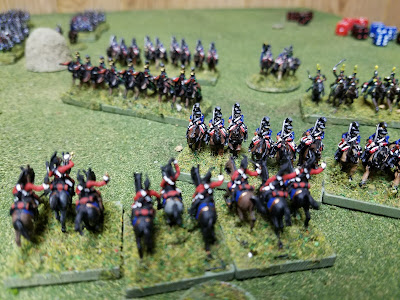 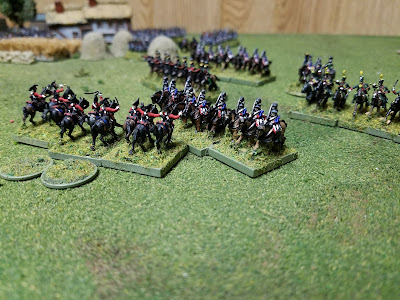 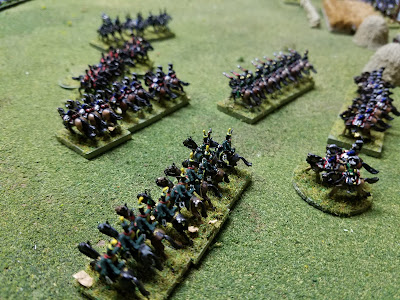 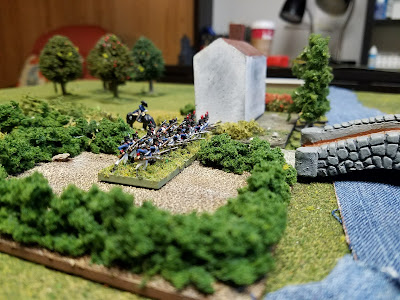 That's where the action stopped last night.  After a crazy Sunday I just had to hit the hay.  But you can see what a proper game of Simplicity in Practice looks like.  Since this is a Black Powder scenario, I'm keen to play this again with Black Powder rules and see how they fare.

So some of the things I like about this game?  Well, it meets my Top 3 for sure.  Uncomplicated, Basing Agnostic, and it plays with a few or alot of units.  there are tons of units on the table right now.  So many so that I could technically have other folks play as well.

It plays fast!  No kidding.  You have a solid decision in your games and there isn't much ambiguity (except those things which Mr Thomas left out - like what is the "To Hit" score for Melees?  Which I just assumed were the same as the "To Hit" roll for shooting).

I like the fact that this game would be comfortable in virtually any era, and you could add the requisite period modifications to make it feel right.  These rules have just the right amount of detail, texture, D6 dice rolling, and fire and maneuver to make this middle aged grognard feel at home.

The cons?  Well they definitely seem to favor the defender that much is evident to me.  Most (all) of my Neil Thomas games where the French attack the British end with the French leaving the field, which may be correct in most aspects of Peninsular Warfare, but since there are absolutely no special rules or shooting advantages given to the Brits in these rules, I have to think that any defender would be at an advantage, especially in terrain.  (case in point look at the Petitos Garrison - the Portuguese have not been able to dislodge the French yet).

Okay I'm off to play a few turns tonight.  More to follow.  Check out the "AMW Group" on Yahoogroups for a fan-produced set of Simplicity in Practice variants, and buy the Wargames Vault supplement.  In the preceding issue, Neil Thomas writes about the virtues of simplicity in wargames design.

I still like Black Powder best as the most sensible compromise with what I'm looking for in a Horse, Musket, Rifle, and Sabre game, but I do like the possibilities these rules open up for some truly big battles!

Posted by Disgruntled Fusilier at 6:49 PM