My buddy Alex was over Sunday night for some Napoleonic gaming goodness with a tiny slice of the Battle of Wagram on the table.  I haven't seen Alex since pre-Covid days and it was good to get a game in with him.

For the battle, we used a scenario from the Michael Hopper Shako 1809 scenario book (Blood Along the Danube) and literally singled out a 2' by 4' sliver of battle featuring Oudinot's forces under Grandjean assaulting the heights beyond the Russbach and Baumersdorf.

We put the venerable Eagles Cheaper than Brain Cells through its paces with another historical matchup, and I also got to use my singly-based Napoleonic 10mm stands, which turned out pretty nice if I do say so myself!

Opening the game, Alex pushes all of his artillery atop the hill overlooking the valley and the Austrian positions.  It's literally a perfect spot for the French Artillery to bombard.  He weights his left with the bulk of his infantry, and pushes a Brigade forward to occupy Baumersdorf, which the Austrians have recently evacuated. 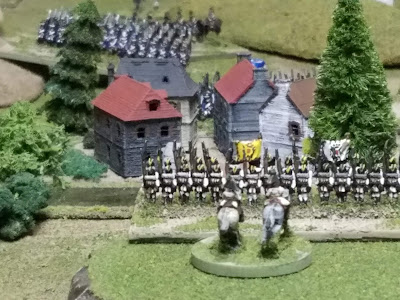 It takes Alex about 3 turns to get into position to launch an assault against the heights from Baumersdorf.  His troops form into assault columns in the shattered village and charge the bridge!


As in the actual battle, the French storm the heights but vicious Austrian counterattacks make life tough for them to stay.  A French brigade charges with elan across the bridge and secures a toe-hold on the heights!  They're promptly sent back by the elite Grenadiers of the infantry reserve.

Turn 6 sees the Austrian grenadier counterattack which eliminates the French breakthrough.  The Grenadiers, supposedly the infantry center reserve, are now holding the line.

Alex has a battery go "out of ammo" by rolling a "1" on their ammo die.  They'll need to spend an order to resupply the guns but Alex is also short on orders now, as units within 1 BW of an enemy require 2 x orders to carry out an action! 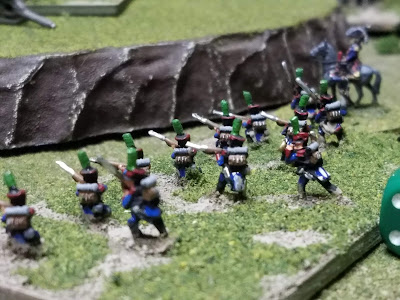 Alex's feint in the center has worked so far and his infantry begin to roll up the Austrian right.  Meanwhile, Alex throws in his reserve Dragoons at the Grenadiers, who are ordered.  That means they can use their order die to fire before the melee, or they can use it as an extra combat die in the fighting.  They shoot - and to great effect, scoring 3 disordering hits!  The Dragoons are now -1 die for the rest of the game.

Warm work in the center as the French also charge the Austrian battery on the heights.  They'd be successful in the combat ( in Eagles, guns always lose melee regardless of hits) but would break themselves carrying the position. 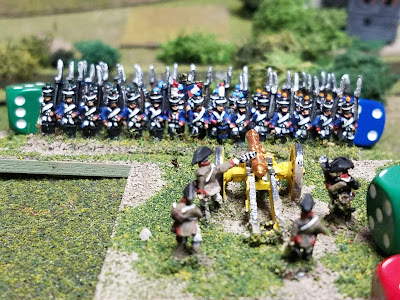 It's worth mentioning here that we tried out a cool feature Alex has worked into his other rules called the "respite" or a lull in the fighting.  Anytime players tie on an initiative roll, the turn is advanced by 1, and every unit may attempt to rally.  This happened 3 times in this game and while the Austrians didn't make every roll, they rolled critical "6s" where they needed, losing 2 hit points.
by turn 10, it's obvious the Austrians will likely lose.  Alex has fresh brigades to introduce so perhaps the time is right to move the Cavalry up! 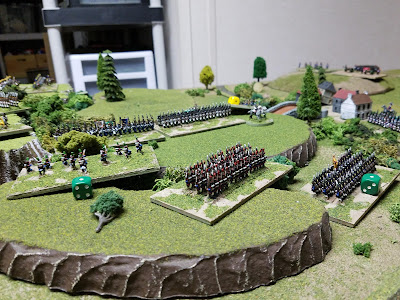 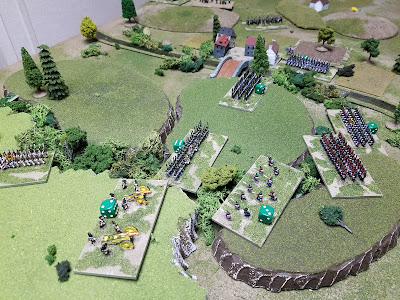 Alex assaults the guns and moves his infantry in, securing a lodgement on the greater heights.  A last-minute charge by the Austrian cuirassiers pushes a French Brigade back, but it's too little too late! The French still have a brigade of Dragoons to throw into the fray and my Cuirassier are promptly destroyed! The French hold the heights with a comfortable margin.  Oudinot will receive his Marshall's Baton!
All told this game took about 3 and a half hours to complete - perfect for an evening's game.  I feel as if the battle demonstrated the versatility of the "Eagles" rules with lots of cool features to keep the game interesting like the switching initiatives, batteries running out of ammo, and bonus dice for certain combat advantages.  It was nice to play a grinding, attritional slugfest like Wagram where fancy maneuvers and battlefield trickery give way to courage, valor, and ignoring the sickening feeling in your stomach as the assault goes in under shot and shell!
In Eagles, Maneuver and movement is very loose, allowing for sweeping maneuvers that you would expect on a Napoleonic battlefield.  Shooting keeps the game moving and both Alex and I were musing that the rules would be perfect for a big battle, and with the single based units there is no fiddling with bases or formations.
Also the turn sequence is such that you can pick the order of your actions, bombarding the enemy with artillery and softening him up before going in with your infantry, and then cleaning up with Cavalry.
I am very much looking forward to more games with Eagles, and also taking them into the future.  I hope you enjoyed reading as much as I enjoyed playing the game and writing about it!
Today is Labor Day in the US, and Ken and I were supposed to play Sam Mustafa's "Rommel" but my wife is under the weather and I'm on kid duty.  That gives me more time to prep the forces for next week.  I also am moving forward with the single based Napoleonic units in 10mm - I think they looked incredible on the table and am very pleased with the results.  For now, more AWI painting (1 more unit till DONE!), SYW and Napoleonic 10mm painting, and prep for the Germantown MEGA GAME to be held in December.  I also have some other surprises on the back burner which I've moved to the front burner lately so stay tuned!  Lots of great gaming goodness coming up, including some highlights from the "Simple Wargaming" project.
Posted by Disgruntled Fusilier at 9:47 AM