The Christmas Offensive: The Battle for Tassa Junction October 14, 1973

The usual suspects were over yesterday for my annual CHRISTMAS OFFENSIVE Mega Game.  The last 4 years this has been an Eastern-Front themed game [click], usually played with the Battlegroup series of rules.

This year we pulled out all the stops and played an EPIC 200+ point Arab Israeli War battle from the 1973 October war using Battlefront's FATE OF A NATION [click] rules!

I've been posting the lead-up to this battle over the last few days, but the truth is preparations for this game started over a year ago with a bunch of GHQ online purchases.  I've always loved gaming the 1973 October War due to the high stakes, tension, and excitement of the engagements.

I've already reviewed the OOBs in previous posts so let's get right to the action!  The Egyptians are attacking to seize the Tassa road junction on October 14th with the crack 15th Armored Brigade.  What's noteworthy I suppose is that I'm using historical organizations to the greatest extent possible so the Egyptians have 2 full battalions of tanks along with supporting elements including 2 companies of PT76 and 2 companies of SU100s from higher headquarters (2nd Tank Army).

They're fighting against the battle-hardened Israeli "Steel" Division!


The Egyptians step off onto the attack with the Tassa junction and the hills around it in sight!  It's a long distance to travel, however, and the Israelis are expected to be there in force with lots of tanks.
The Israelis are starting with all of their on-table forces in ambush.  2 full platoons of M48 "Magach-3" tanks and the HQs platoon (CO and XO) and the artillery spotter from battalion, the Fire Support Officer in his M113 APC.


The Israelis move into position in their ambush sites and prepare to spring their trap. 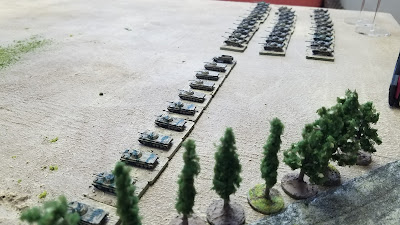 Ken's observer calls in the big, 120mm Mortars right atop the infantry in their carriers (BTR152s).  They destroy one and some of the teams in it!  The Israeli Air Force makes a showing as well and screams in at low level to bomb the formations.  The Egyptians have removed the tracers from their ammo load!  It's an ambush of the A-4s!  Both are shot down before being able to drop their ordnance! 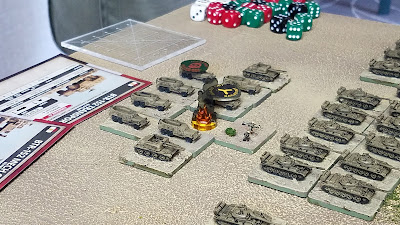 Ken literally knocks out almost an entire T-55 company on the first turn of shooting and the Egyptians cannot reply.  He successfully passes a "blitz" move and moves back 4" 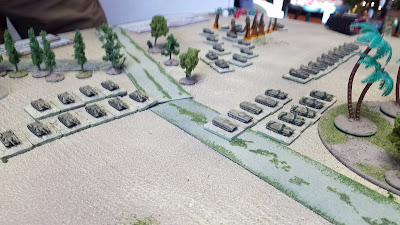 We discussed the pros and cons of using microarmor for games like FOW/FOAN/TY and what changes should be made when doing so.  In order to make the command distance scaled with the minis, the Egyptians stacked their companies in 2 x rows which Alex and Dave called "checkerboards". 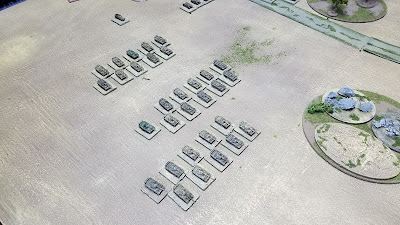 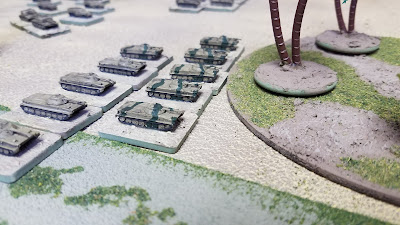 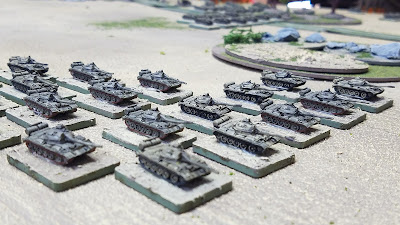 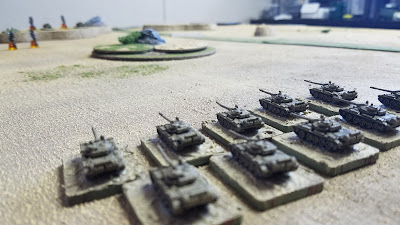 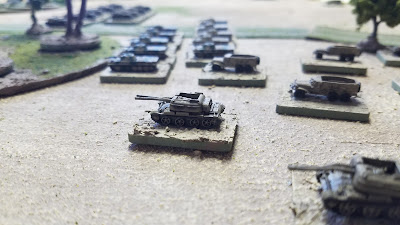 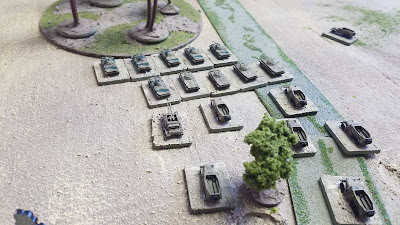 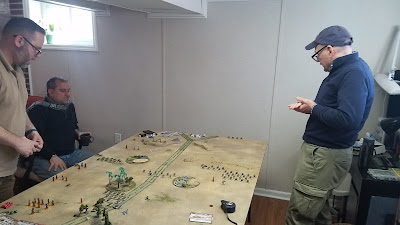 Ken finally starts to see reinforcements and the Ishermans and the other Magach-3 platoon arrives on the scene.  The Ishermans are wiped out almost as quickly as they arrive!  Reminder-  Ken cannot put his infantry in until all armored reserves have arrived on the table to reflect the Israeli problem from the 73 war of committing tanks without proper infantry support! 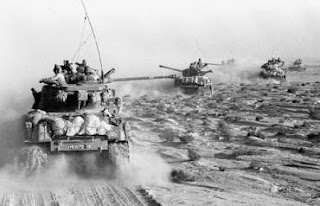 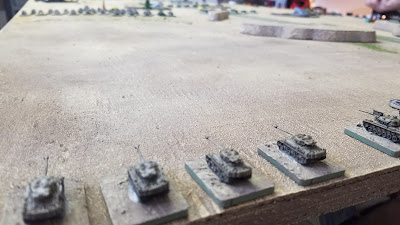 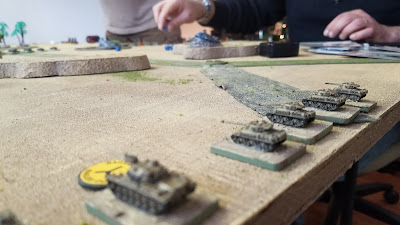 The Egyptians start to get bold and move in their companies on the left and right.  Ken doesn't have much more room to trade and moves his tanks back to trade shots against single companies, instead of multiple ones. 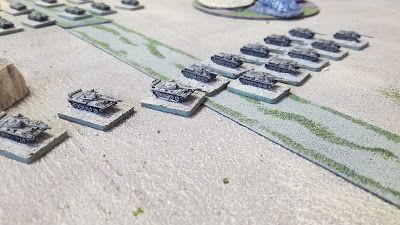 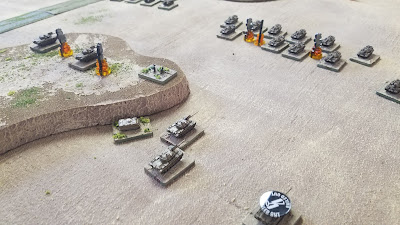 Here is a quick shot taken by my wife of the game and the team!  Even though there were some "issues" with the scenario, I'm hoping everyone had a blast.  I sure did watching the action!  It was great to see the fruits of all this work over the last year!

Speaking of "fruits" (you will see none here), Darren specifically asked for a shot of all the treats.  Ken brought donuts, Dave brought Cadbury chocolates and my wife made berry scones and also brownies!  No one should have left hungry!


Post Game Analysis
So the Egyptians actually had 70 MORE points than their Israeli counterparts, which may have tipped the scales in favor of the Israelis.  I unfortunately didn't realize this until the morning of the battle and went with it to see what would have happened.  I think the scenario specific rules were good and I also think both sides made the best decisions they could with their circumstances (Egyptian maneuvering and targeting, as well as Israeli targeting decisions).

It's a serious shame the fast-air was shot down so fast!  Equally sad that the infantry never were able to come to grips.

The guys debated the merits of 6mm vrs 15mm and we discussed at length the changes to the game that result including:

I still contend that FOW/FOAN/TY are perfect microarmor games but definitely need some things ironed out to get the most out of them.

All in all though, considering there were over 100 tanks on the table, we started the game around 12:30pm and finished at 5:00.  So a huge, historical battle was played to completion in 4.5 hours.  I'm not sure how much better you can get than that!

It was a great day spent with friends with lots of excitement playing with toy soldiers.  Thanks to all the guys for participating, and thanks to the reader for stopping by!  Another Christmas Offensive MEGA GAME under the belt!


Posted by Disgruntled Fusilier at 8:56 AM