Normally I would post a "year in review" but I sort of did that on Christmas so I thought I'd post my upcoming thoughts for 2018, specifically in terms of project plans and gaming plans. 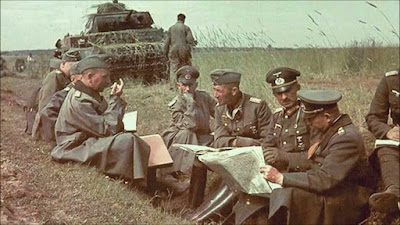 Most years I have about 5 to 10 different "priorities" and "focus" areas to hone in on and that's proven to be inefficient, ineffective, and actually quite costly.  "How can 10 things be priorities?"  You're asking.

So this year I'm narrowing my scope in on 2 specific projects for the year, with the intent of making significant progress in these departments.  The first, obviously, is World War II.  With my rules quest in high-gear and Alex's UP THE BLUE rules providing some great motivation and impetus to "get stuff done" I'm looking to the future for potential MEGA GAMES, campaigns, and megalomaniac projects including Ponyri Station, and even parts of Stalingrad like Pavlov's House, or the Nail Factory.  Possibly even the Wargamer's Holy Grail, the Tractor Works!

The second project focus is me going back to my wargaming roots with the American War for Independence.  Musket Miniatures' 15mm AWI troops were the first historical miniatures I ever purchased that weren't microarmor and I am very close to completion with this project.  In fact there are probably just a few more Regiments on each side to complete, then the stragglers can be individually mounted for skirmish gaming.  (This Very Ground or Neil Thomas Skirmish Wargaming anyone?)

I had kind of let the AWI project go in recent years so it's time to dust off the cobwebs and get some great AWI battles on the table.  I'd like to explore more of the COMMANDS & COLORS: TRICORNE rules, which in my opinion really evoke the period feel more than any rules set I've played depicting linear, 18th Century Conflict.

I will also provide solid end-states for my projects that I can measure my progress against, and here they are:

World War II:
Standardize all World War II basing across the board and for every theater (ground cover, texture, and flocking).
All Soviet Troops I have should be based for CROSSFIRE/UP THE BLUE/IRON CROSS/etc
Finish my Stalingrad Soviet Marine Battalion for CROSSFIRE
Finish my GrossDeutschland CROSSFIRE company
Finish my SS CROSSFIRE company
Get my American and British/Canadian forces off the ground, first with an "UP THE BLUE" ready force, and then with suitable BATTLEGROUP forces.
Play an actual Ponyri Station battle occurring within the town itself (which would entail lots of additional terrain builds).

American War for Independence:
Paint all AWI troops that I have left that have not already been painted.
Complete the encampment / oxen resupply trains as well as the artillery.
Flock all of my existing units / standardize texture, ground cover, flocking
Play the Saratoga campaign with battles fought on the tabletop  (and delve into a true campaign, with a hex or map based strategic game, followed by battles occurring on the tabletop)
Integrate Commands & Colors: Tricorne into my battles wherever possible.
Play a large Black Powder AWI battle (Freeman's Farm comes to mind.  Monmouth would be too big for my table but I've always been fascinated by Monmouth Courthouse)

Terrain
Last year I started to "up my game" with terrain and while I've introduced many new techniques and kit onto my table, I'm not where I want to be yet so this year will be "the year of terrain" with me trying to standardize terrain features like forests, hills, my gaming table surface (which will be going through another makeover), buildings, and built up areas.

So there you have it.  WWII, AWI, and Terrain will be my primary focuses for 2018.  This is not to say that I won't be playing other games, rules, and eras, but simply that my priorities are geared towards finishing my WWII open projects, and finishing ALL of my AWI troops that I currently own.

I have to say, for having a 1 year old in the house, we still did get to our fair share of gaming and I'm hoping to expand those plans for 2018.  Should be a wild ride!

Posted by Disgruntled Fusilier at 8:32 AM