A rare day off today so I spent the afternoon playing Game 2 of my Ponyri Station Mini Campaign with the German 292nd Infantry Division (the Pomeranian Division) seizing and holding a crossing site over the Ochka River on its way to Ponyri.  This is the second battle in an ongoing drive towards the initial day 5th July objectives for the 507th Infanterie Regiment, the "KastenWald," or Box Forest, as the Germans called it.  (the forested terrain features, based on aerial reconnaissance photos, were named by clever staff officers after whatever object they resembled.  The 507th's objective for the first day was a large forest in the shape of a box...)

While the Germans got a rough start on the initial push, things start moving quickly in 507th's sector!  The 507th led off with their tanks forward and soon PANZER ALARM was yelled throughout the leading infantry and armor platoons of the assault as Soviet T-34s surged forward to meet the Germans over the river crossing and push them back.  It was not to be!

The German long barrel 75mm guns (the 507th actually had StugIII assault guns in support during the real battle) eviscerated the Soviet armor long before it arrived at the crossing sites, giving the Germans enough time to dig in and await the eventual attack.

They didn't have to wait long.  This scenario was actually Scenario #5 "Bridgehead" in the One Hour Wargames book and the Soviets arrive from up to 3 different sites.  In this instance, all but 1 platoon arrive at the exact same spot and a straggler platoon arrived close to the bridgehead.

This game was packed with excitement as the German early tank gunner obliterated the T-34s early, and a well timed German ambush knocked out a Soviet infantry platoon who had infiltrated close to their positions!  The remaining German infantry took up positions along the orchard awaiting the Soviet infantry who were reportedly not far behind those burning tanks.  There could be only 1 place they were headed to!  The Ochka River Bridge! 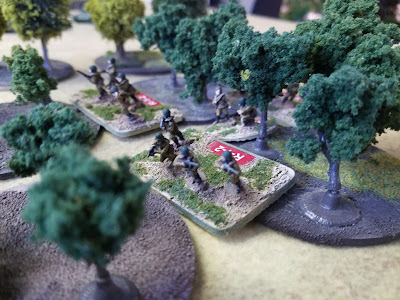 THe Soviets arrive at the orchard in time to see Germans already starting to crawl through it.  A firefight breaks out among the platoons embroiled in the orchard.  The Germans take a turn to dig in as Soviet mortars start to fall.  Miraculously, the Soviet mortars fall long or short and dont do any damage this turn to the Landsers.


The Soviets begin shelling the German 3rd platoon while moving up additional infantry reinforcements to capture the orchard.  It's hot work in the orchard as 2 platoons, with more on the way, are starting to fight for control of the neatly lined trees. 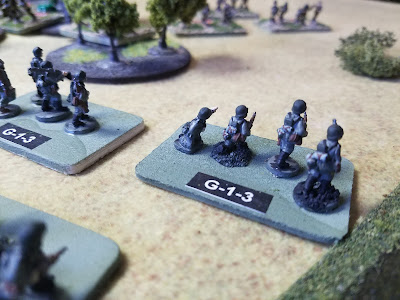 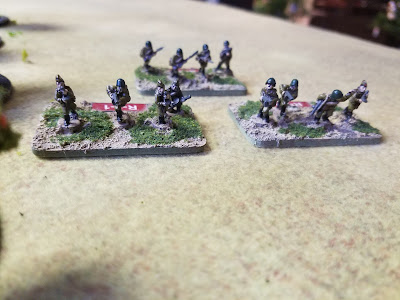 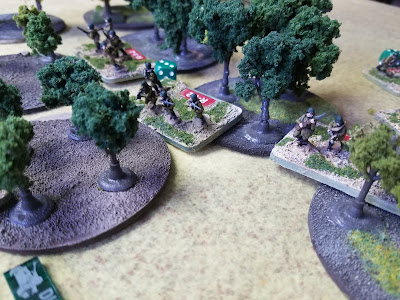 The Germans swing their armor around and catch the Soviet platoon in the open, who promptly take up positions in the woods.  Now it's a matter of mopping up. 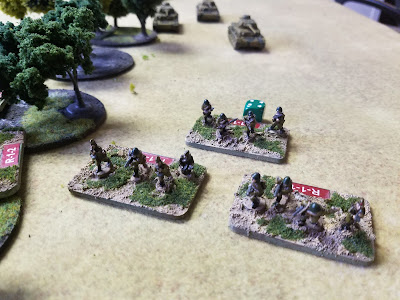 Second battle in my mini campaign is complete now and the Germans are right on schedule.  They'll swoop into the KastenWald and have to hold it against Soviet counterattacks at the end of the first day and into the night.  A couple things I've been thinking about introducing for the campaign:

Mines.  There were lots of them and mines were the reason for many units reporting agonizingly slow progress during the Kursk battles.

Up-Gunned Panzers.  The German 75mm long barrel tank gun was an outstanding piece of equipment and I feel like the German tanks should have a little more "oomph" to them in these battles.

Heavy Artillery.  Some of the heaviest German concentrations of firepower were used during the Kursk battles.  I feel like there should be some additional fire support options like nebelwerfers or the big 150cm guns.  If you have to stick with the 1HW construct, then perhaps if the player gets a force structure that includes mortars, then you roll on an additional table that tells you what you get (mortars, 105mm artillery, heavy mortars, 150cm artillery, rocket artillery to name some)  naturally these assets wouldn't all be available each turn.  Some of them, like rockets, would have considerable reload time.

Tactical Air Support.  Who doesn't want a Stuka or Sturmovik crashing down on the other guys' troops?

Interestingly, I had meant to play these battles with the terrific "Battlegroup: Kursk" rules but having found myself extremely short on time and energy the past 6 months, Alex's UP THE BLUE rules, his variations on the One Hour Wargames World War II rules, have done the job nicely.  While I still plan on playing these with Battlegroup, that will have to wait.

Anyways that's all for now.  The third objective will be the end of the first day, with the Germans right on schedule, historically, to where they were during the northern Kursk battles.  Next stop - the Kastenwald!


Posted by Disgruntled Fusilier at 3:46 PM