The Christmas Offensive: 1st May Collective at Ponyri BIG BATTLE!

Dave came over to participate in my annual "Christmas Offensive" game and this year's titanic Eastern Front clash was not to disappoint!  I posted the points, map, and OOB here. [CLICK]

We played a continuation of the Kursk Ponyri Battles with the Soviet 3rd Tank Corps attack against the 1st May Collective Farm, located to the Northeast of Ponyri [CLICK] itself.

The battle we gamed was as faithful attempt as possible on a 6 x 4 table to recreate the Soviet 57th Motorized Brigade and 27th Guards Heavy Tank assault into the 507th IR's perimeter on the morning of July 9th.

We used Battlegroup: Kursk rules with an epic 968 points on my modest 6 x 4 table.  The result was a meatgrinder of a clash with desperate tank and anti tank duels, infantry thrusts, and brutal counter attacks!

The Soviets started out with their recce (scout patrol and a T-70 light tank) as well as 3 x T-34s.  The Germans start with an AT gun and their Stug-IIIs and an infantry squad in trenches.

Ivan gets reinforcements on turn 3 and Fritz gets them on turn 5!  I know to Dave, who played the Germans, it must have been an eternity to watch that red tide of armor pour onto the table knowing he didn't have any friends coming until turn 5.  But his Stugs gave an excellent and honorable account of themselves and there were many Iron Crosses to go around (posthumously). 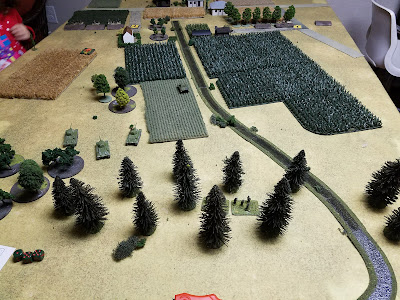 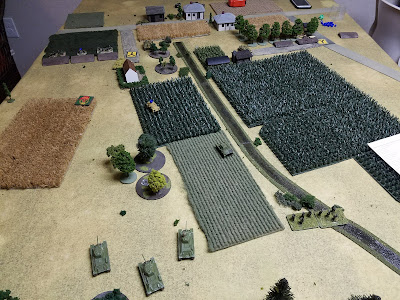 We tracked our ammo this time, which is unusual for us since we normally do not but we thought it would add a new element to the game.  It definitely makes you consider your options when ammo is finite, and it also forces you to use coax/bow MGs against infantry!  5xshot Stugs!  Mein Gott!  Where are my supply trucks?!?!?


I start to get a mountain of reinforcements and they pour over the table with the infantry huffing and puffing to keep up.  Meanwhile Dave's Stug's are earning their pay and keeping me from advancing more on the left.


The Soviet armor charges the treeline on the right through the cornfields and Dave's AT fire is nasty.  He also earns more than a few "BEYOND THE CALL OF DUTY" rolls and ends up shooting more and more AT guns than I bargained for....pulling chits like crazy! 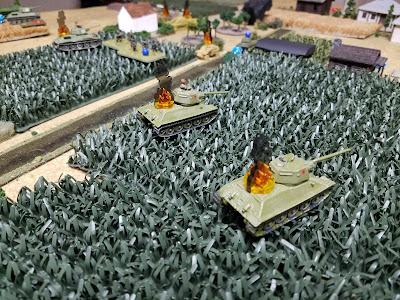 Worth mentioning here that my SU122s were also thrown into the battle.  I brought them straight up to the trenches on the left but their abysmal rolling really made them "meh" for much of the battle.  More on this later. 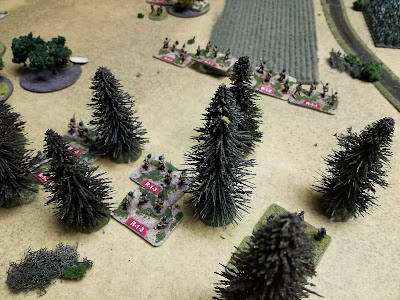 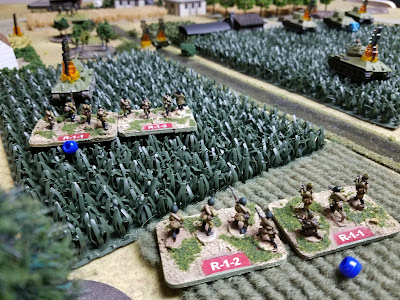 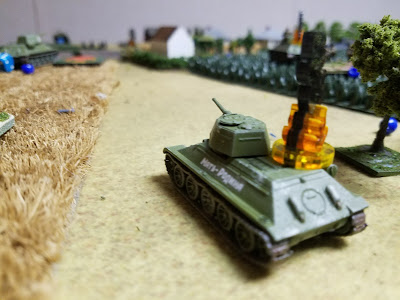 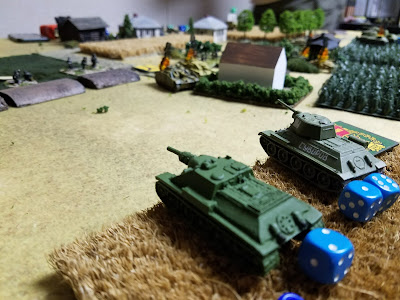 Then Dave brings on the Ferdinands and they start immediately taking long range shots with their 88mm guns!  Looks like the Germans are going to shut the flanks down!  Luckily I keep losing guys and end up pulling a mine strike and it's a catastrophic kill on the first Ferdinand.  What a nail biter! 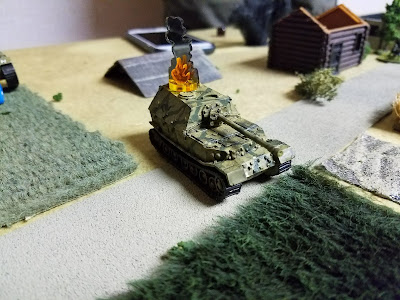 With most of our Armor KIA, the fight takes on a new dimension as the infantry start to close with one another.  I quickly realize I'm not going to win going toe to toe with the firepower of the German teams and their dedicated 105mm battery so I try and close the distance to close assault.


With the slowness of the Ferdinand, I find a useful tactic is to sprint my SU-122 around from hide side to hide site and this buys me a turn or 2 before Dave can get a good shot on them!  I need that big gun! 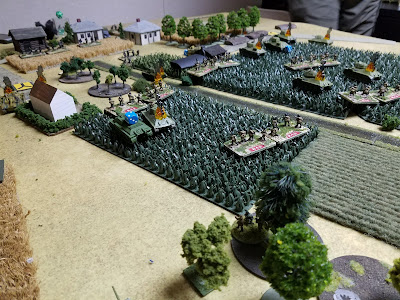 Dave decides to keep his FO team in the orchard and my infantry squad over runs them in close assault combat.  Then my squad is taken out by rifle and MG fire.  It's a bloody mess! 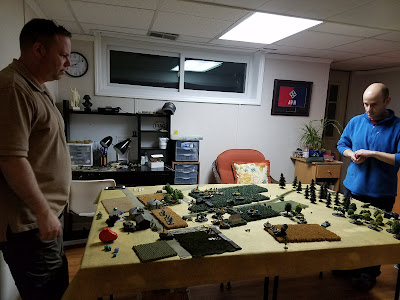 I pull an aircraft chit and get an Sturmovik!  Time to put it to good use.  Oh wait...I got rockets....

My close assault on the right is successful and Dave noted that I almost have an objectives secured victory but I reminded him that he still got his turn to counter attack (which he did to great effect!).  Dave moves his remaining Ferdinand up to the objective.  How the hell do we get rid of this thing now??? 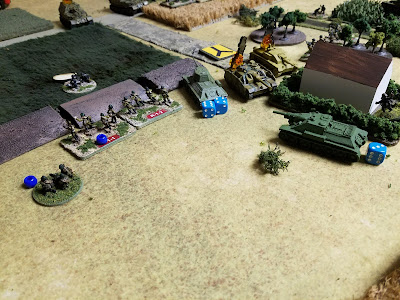 So far the battle has been a grind with tons of casualties each turn.  We're both holding on by our fingernails but the German infantry has lots of tricks up their sleeve!  Like LMG teams in the buildings! 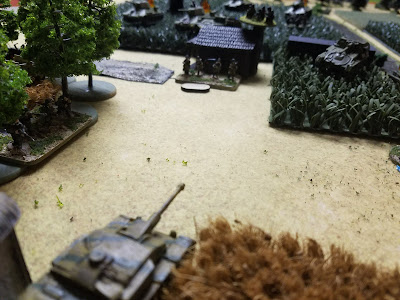 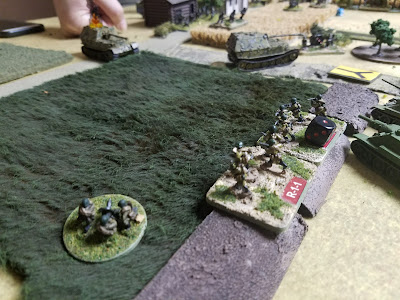 I need an 11+ to penetrate.  I roll an 11 flat so it forces a pin/morale check.  Dave's "veteran" crews pass!!  My nerves can't take many more turns!  It's pretty obvious where my IL-2 will focus on next. 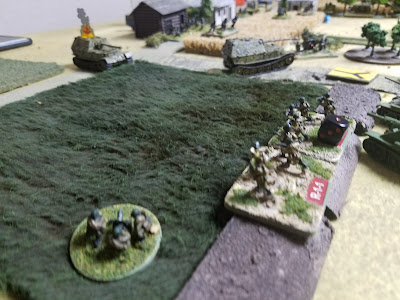 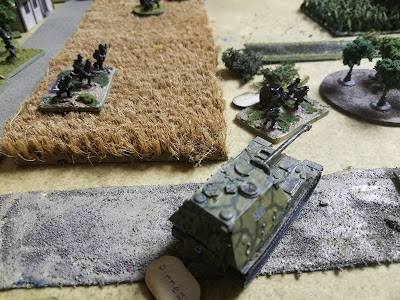 My AT guns have made it up to the fighting and I put them to good use.  I also send all my infantry forward on the right to over run those Germans in the small wheatfield beyond the treeline and the company command post. 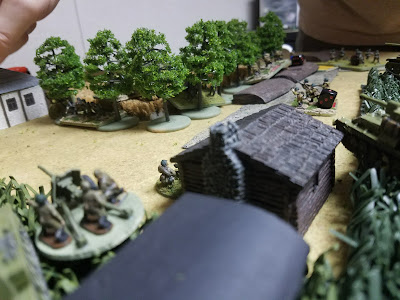 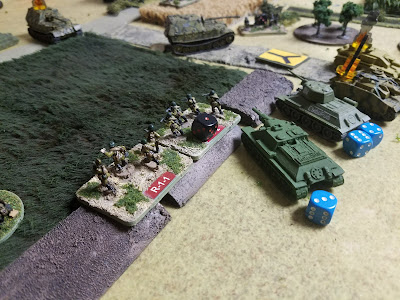 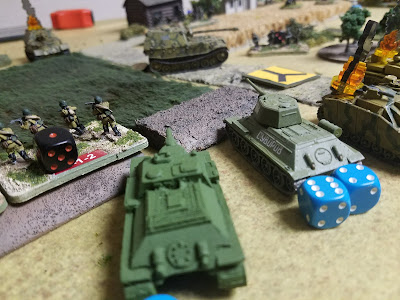 I over ran Dave's command post here and killed "old wooden hand" company commander who lost his hand in a previous battle...  Dave stabilizes the assault with more of his battle-hardened infantry.  This is a real brutal slugfest with teams and squads going down on both sides.  Dave gains the upper hand but his force is a shell of its former self, just like mine!

We get close to our battle rating and a final 122mm artillery strike settles the game and the Germans reach their BP of 68 and withdraw.  I was at 57, a mere 6 BPs away from breaking.  I would not have lasted another turn.  The battle took just under 6 hours to complete.  MERRY CHRISTMAS TO ALL!

Wow what a battle.  The infantry fight was exciting as was the armor fighting and all of the extra toys on the table.  I love battlegroup for the narrative it produces and both Dave an I were exhausted from the fighting.  (worth mentioning we both had full work days prior to the fighting).  On my table, I think the "Sweet Spot" for Battlegroup games is probably 450 to 500 points or a platoon sized game in 15mm.  Playing larger games than that we could have used more people where everyone could command "something."

The one thing I will say is that the Battlegroup: Kursk battle shaped out almost exactly as it did in real life and frankly that's the gold standard of wargaming right there in my humble opinion.  In real life at the 1st May, the 3rd Tank Corps' assault pushed the Germans back, temporarily, and the 507th IR bled itself recapturing the collective farm.  So picking up where we left off last Christmas, the 1st May Collective is recaptured by tired, worn Soviet forces!  (and true to history, will be recaptured by reinforcements from the 507th and 653rd the very next day).

I want to fight this battle, in its entirety again, but with Alex's "Up the Blue!" rules and see how they handle a mess of a game like this with exactly the same forces and parameters.  (reinforced attack with troops arriving on turns 3 and 5).  Might be fun from an OOB perspective as I'll have roughly a battalion on both sides of the creekbed.  Stay tuned and MERRY CHRISTMAS!

Posted by Disgruntled Fusilier at 10:39 AM