Alex hosted a North Africa themed "MEGA GAME" at the FLGS this Sunday afternoon with forces and scenarios based around OPERATION CRUSADER / OPERATION SONNENBLUME (sunflower), the infamous German "TottenSonntag."  6 participants with lots of hardware! 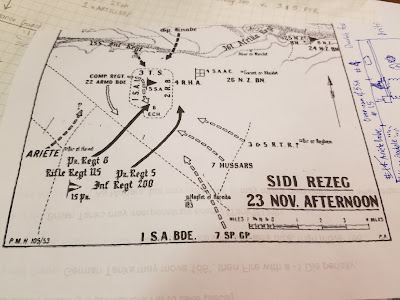 We used Alex's "UP THE BLUE" quickplay rules based off of Neil Thomas' One Hour Wargame rules and it seemed, at least to me, that the players heartily enjoyed themselves.

While not necessarily linked, each combatant paired off against another combatant and fought a scenario based off of the action of their historical counter-parts.  The scenarios were based off of a specially selected scenario from Neil Thomas' One Hour Wargames book that matched the situations that the units found themselves in.

There were 3 separate games occurring as per the map above, in sequence with each other.  My scenario was "Flank Attack" in which I had to hold a strategic hilltop against the British counterattack with 7th Hussars using forces from Panzer Regiment 5.

The center scenario (Dave played the South African-Brits in the center) was a real meatgrinder with an "up the middle" assault against prepared nightmare positions and on the extreme left, the Italian Ariete Armored Division fought a meeting engagement battle with the British 22 Armored Brigade.

I looked at my portion of the battle as a sort of flank guard for the rest of the force.  By holding this hill, I was enabling the Germans to conduct their main assault in the center.  Speaking of the hill, I had a platoon of PAK-38s and "elite" infantry dug in at game's start.  Coming onto the board was an entire company of armor, and my heavy mortars.  They'd also have spotting ability for heavy artillery located off-board! 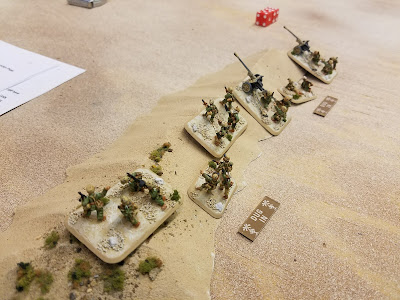 Worth mentioning here that all of my reinforcements would show up on turn 2. 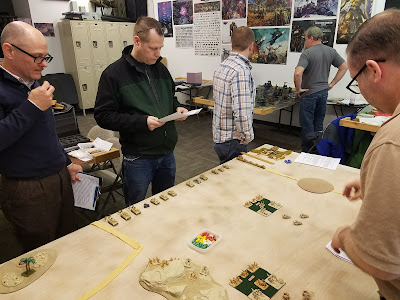 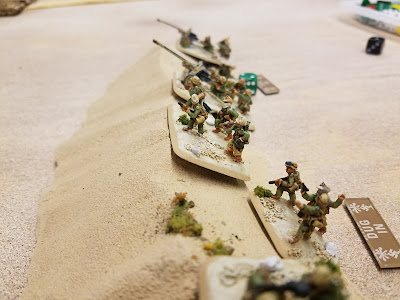 As my armor shows up, the great wedge of armor heading towards the hill veers off to meet them and a shootout starts that would last pretty much the entire game.  A grueling tank battle! 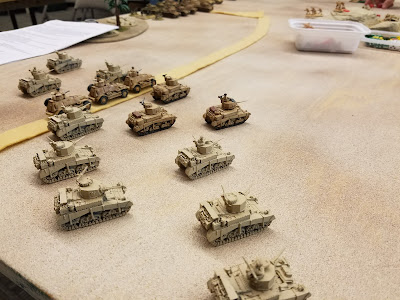 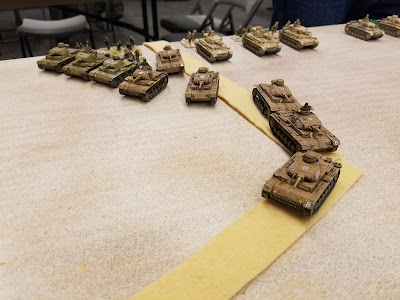 Ouch!  British gunnery right off the bat hits my Panzer III platoon in the lead and forces a "permanent" hit.  Break out the yellow dice!


A massive vehicle battle breaks out to the far right as the action in the center turns into a real "tottensonntag." 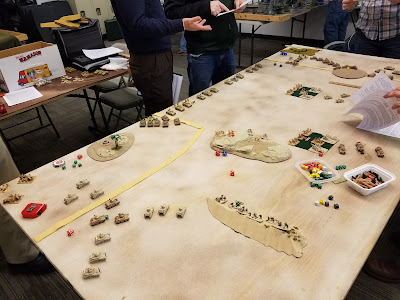 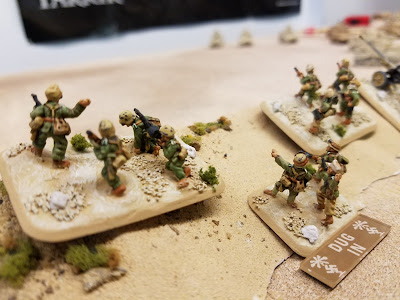 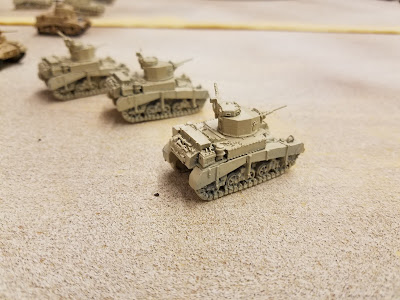 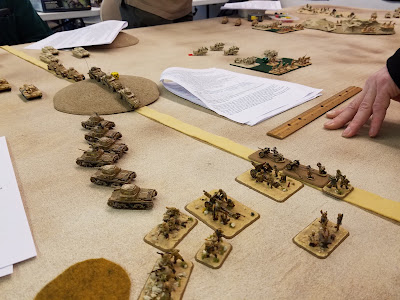 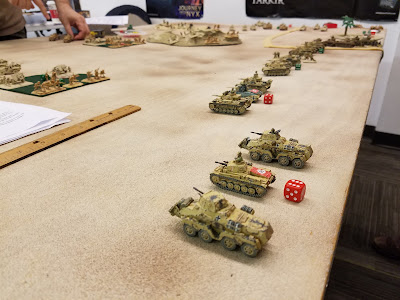 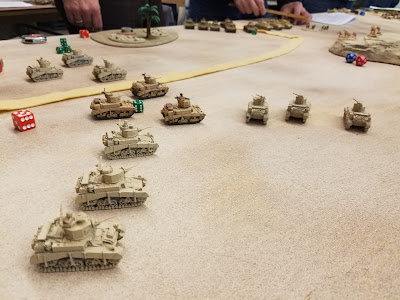 I'm using my mortars and heavy artillery to good effect, trying to whittle down the British armor. 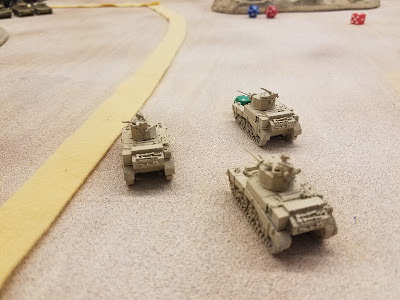 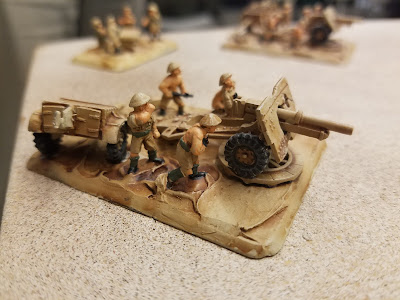 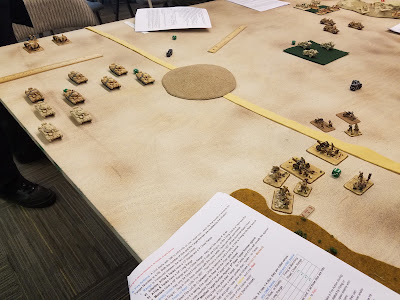 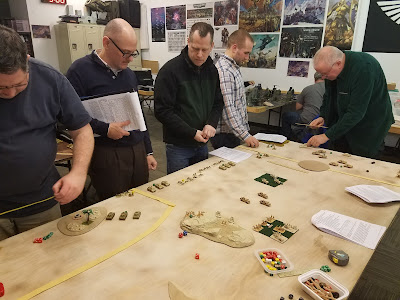 Most of the tanks end up shooting each other to pieces and are driven off on my side of the board.  The end of the first battle on the flank leaves us with a platoon of British guns, and a platoon of German armor with my infantry still holding the hill.

The second game we played, the British player focused most of his efforts at the hill and pretty much had it sacked by turn 10!  I conceded the battle at turn 12 i think when it was obvious the British tanks would reach the hill and my infantry were driven off. 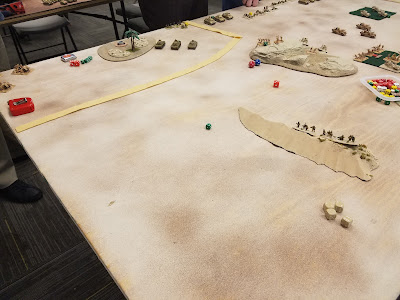 We decided to play one more game with the same forces and same sides. This time the British player changed his strategy to use more firepower against the hill right out of the gate and my AT guns barely last 3 turns!  Not good!
I start the second battle with the infantry dug in and "ready" as well as the AT guns dug in.  This gives me some advantages and lets my troops last much longer than they normally would have against all those tanks out there.

My strategy doesn't really change from the first battle.  I'm working on whittling away at the british armor with my indirect fire and tank guns.  Just the presence of 3 German Panzer III platoons on the British left is enough to keep some of his armor from moving over to assault the hill. 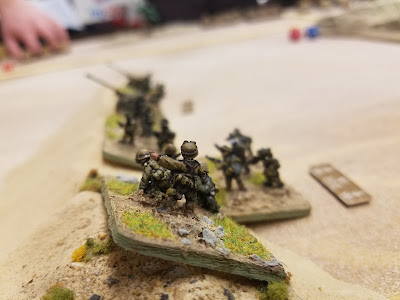 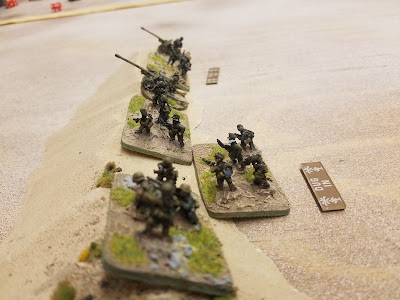 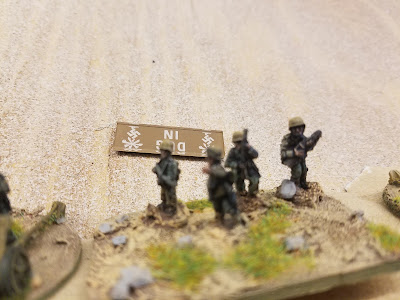 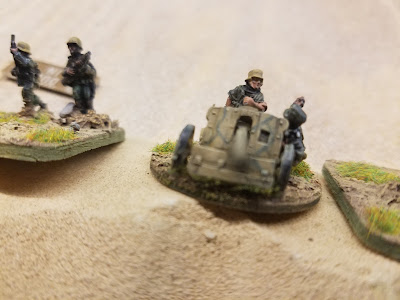 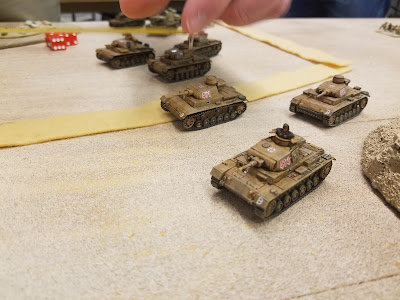 I pretty much stopped taking pictures after that and was focusing on playing the game and watching the rest of the game in the center.  This is probably the 10th or 11th time I've played Alex's "Up the Blue" rules and I really enjoyed them.  Lots of decision making, plenty of combined arms opportunities, and the units act like real units for the most part.  Some of the observations I noticed, for better or for worse were:

Some of the guys noted that the dug in infantry were taking a serious toll on advancing armor.  I personally attributed this to small AT guns and anti tank rifles at the platoon level, maybe even prepared obstacles or mines placed in the desert.  Either way, it was an observation I'm putting down for Alex's notes as he continues to build his rules out.

Also noted that the inclusion of off-board heavy artillery made a huge difference on the game and on the decisions of the players.  Even though I was one of the loudest voices for this kind of added feature, my heavy artillery gave me a massive advantage and made life really difficult for the British.  I'm not sure if it was impossible, since the British did win the second game, but it basically ensured that I'd be wiping out a tank platoon every 2 to 3 turns.  So something to consider.  Perhaps both players have the capability, if at all.  Or use a dedicated, single spotter stand for off-board stuff?

Personally, I'm a big fan of the rules and will continue to play them.  From what it seemed like, the guys got into their games and seemed to have a really good time.  Mission Accomplished!

Also worth mentioning that I bought the ruined train station from Novus Designs during their Black Friday sale!  Ponyri Station next July anyone?  I'm already starting work on rubble drop-terrain!

Posted by Disgruntled Fusilier at 8:33 PM