Dave came over this evening and we played our very first game of Battlegroup: Torch!  This was an awesome game played in a theater we had not previously ventured into yet - Battlegroup in North Africa with untested Americans!  So sit back, grab yourself a cup of coffee and get ready to face off against Rommel's veteran DAK troopers. 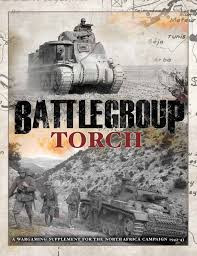 We played the scenario straight from the book entitled "Ridge Assault" and Sidi Bou Zid [click](Unternehmen Fruhlingswinde "Spring Breeze") seemed a perfect campaign for dipping our feet into 1943 North Africa, with the US Army National Guard's 34th Infantry Division holding defensive "islands" on high ground and trying to hold out against strong assaults by Veteran Germans.

We played about 185 points per side, so this would be a "squad" sized game with not much more than a platoon on either side.

The Americans have a platoon from the infantry division list consisting of 3 squads.  Each squad has a separate rifle team and BAR team and are a whopping 12 Soldiers each!  Their breakpoint is 13.

The Yanks also have an MMG section, a light mortar, a senior officer, bazooka team, recce section mounted in a jeep, and, for the first time ever, we have a timed airstrike from a P-40 Warhawk, and a timed 105mm artillery strike.  The Americans though are rated as "inexperienced."

The Germans have much better troops (regulars in this case) but they are more expensive.  I built my force around a German infantry platoon consisting of 3 x MG-34 LMG teams, and 3 rifle sections of 6 troops each.  They also have a senior officer (Rommel himself!) medium mortar and a Panzer IIIG in support.  Their breakpoint is 18!

Let's read an excerpt from Able Company's logbook just before the battle kicked off:

Able Company/1st Battalion/168th RCT Logbook
DA Form 1594
140550FEB1943
Able Company road marched throughout the night and occupied positions atop Hill 116 per Battalion Operations Order #1.  1st platoon is dug-in on the west slope of the hill looking over a lush valley with a farm and numerous wooded copses of trees and a fruit grove.  The men have dug foxholes and sited weapons.  Communications checks were conducted at stand-to prior to dawn and the Company 1SG began a watch rotation so the men can get some sleep.  Field telephones have been set up with wire laid.
Regiment has a time on target mission (105mm) planned for 0815 hours at the farm complex and there may be air cover today.
Captain Sinclair sent out the reconnaissance patrol consisting of a Battalion Intelligence & Reconnaissance squad that has been attached to A Company.  A bazooka team was also sent with the recon element (PVT O'hara / PFC Cook).  Captain Sinclair instructed these men to patrol the wooded areas in the valley below and report any indication of enemy movement.  ~NOTHING FOLLOWS.

As it turned out, the Germans would start the attack with literally all of their forces on the table - no reinforcements!  The Americans have 2 squads returning from prior patrolling.
ABLE FOX THIS IS ABLE FOX FIVE, HEADS UP WE HEAR TANK TRACKS DOWN HERE!
The German Panzer III creeps over to the building to lay fire down on the Ami's. 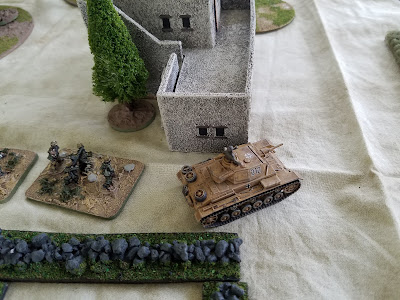 The DAK infantry flood the orchard woods and the farmhouse to take up positions to fire against the Americans.  Targets on the ridge get 1+ cover so this won't be an easy pushover for the Germans.  I opt to take the covered route through the woods to get to the ridgeline. 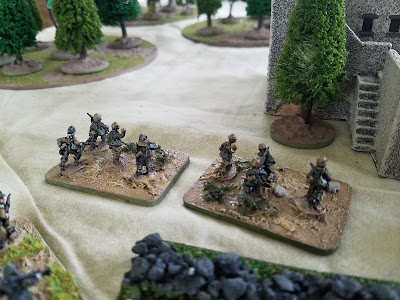 The first German fire is an HE shell from the Panzer.  It misses wild and all of the Americans know where the tank is now.  The I&R section cocks the handle on the jeep mounted .30 cal and the Bazooka team skulks over towards the farmhouse, unaware that there are scores of Germans moving right towards them!

The Germans capture the first house and Dave pulls a chit.  They start lighting up the infantry on the ridgeline as best they can.  I'm starting to regret taking the mortar with me thinking I should have taken the MG34 heavy.


ABLE FOX THIS IS ABLE FOX FIVE WE HAVE GERMANS TO OUR FRONT AND ARE BREAKING CONTACT!  The US I&R section decide to bug out.  They let loose a long burst from the .30 cal but it fails to hit any of the Germans in the woods to their front!  When they back out of the position in the difficult terrain, the Jeep gets stuck...
The DAK return fire against the jeep and crew is merciless.  They knock out the jeep and then the dismounted crewmen.  Things look like they're going the Germans' way. 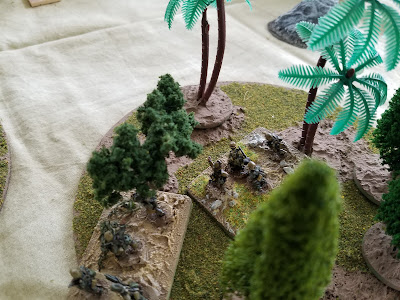 Unbeknownst to me, Dave has a timed strike from a P-40 warhawk arriving this turn and his target?  The house!  (my objective).  The tank is also parked directly next to it.  This could be curtains for the panzer.

While we muddled through the air strike rules, it's pretty safe to say the LMG team is KIA, and the tank is knocked out!  2 x chit pulls!  My mortar team is pinned and Dave's bazooka team is pinned and wondering what it's like to survive a bombing raid by your own air force.

The Germans push through the recon team's position to the edge of the woods within sight of Hill 116 and the second objective.  They get greedy and grab it to make Dave pull a chit.  They start trading fire with CPT Sinclair!  A first for us!  Meanwhile, Dave is trying hard to keep the DAK troops at bay.  Instead of reinforcing my success on the left, I send a squad over to protect my flank.  Dave starts getting aggressive and sends troops from his more quiet left over to threaten my breakthrough.  Lots of maneuvering here and I really underestimated how effective the American shooting would be.  Dave's BAR teams are 6D6 and his rifle sections are 7D6.  Plus his MMG is still there pouring flanking fire into the woods.


Dave's second trick up his sleeve is the timed 105mm strike which comes in on US turn 4.  This kills my mortar team and also sadly falls on the Bazooka team.  Unbelievably, O'Hara and Cook survive, still pinned!Dave maneuvers a rifle section into the valley to flank the Germans.  They get into a rock field which is hard cover! 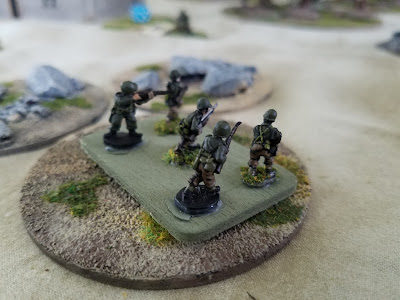 The DAK troops kill CPT Sinclair and the command group and flood the right side of Hill 116!  The problem is I'm running out of infantry.  Not much to hold the hill and Dave has another squad coming up to reinforce!  I'm in big trouble!


Light is starting to fade now but Dave and I are pressing on.  Dave uses the Platoon Leader to call the 60mm mortar in on the woods in the valley.  Just so happens that he hits my senior commander!  (ROMMEL HIMSELF!  MEIN GOTT!)  The audacity!  Has anyone ever actually lost Rommel before in a game?  (or any other senior commander for that matter).  Anyways the German command stand loses 1 figure to the accurate fire.


The Germans lose their flank-guard squad to intense American rifle fire.  THe German platoon leader makes his way up Hill 116 and they become practically surrounded by Americans.  Die Hexenkessel!  The DAK troops jump into the American foxholes and fight it out.  After losing my squad, I'm dangerously close to BP.  I thought I had lost but Dave recounted my chits - I have 2 left!  I have no idea how close he is but we both have lots of chits.

My only hope at winning is to now hold out and cause casualties on the advancing Americans.  Meanwhile the valley is flooded with GIs!  Dave pins 2 of my stands now, the platoon leader stand and a rifle stand.  There is a crazy firefight with the American squad in the woods.  Neither of us is risking to un-pin a squad now, instead trading fire with what he have on the field.  Simple math tells me I'm gonna lose pretty soon!  Another volley against the Ami's down on the reverse slope of the hill in the woods.....The Germans are fighting to the last bullet and man!

And all of a sudden, the Americans stop shooting.  THey're retreating???  The German platoon commander pokes his head out of a foxhole and peers into the valley.  The Americans are leaving?  Dave reached his BP after that last volley of rifle fire which killed Dave's rifle section in the woods.  The battle is over.  What a nail biter! 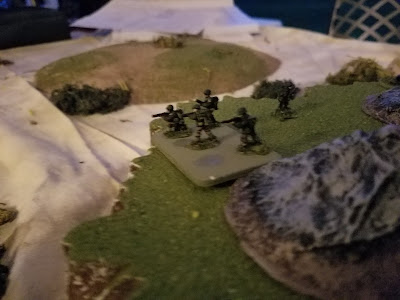 So unbelievably the DAK pulled out a win here by sheer luck.  Dave was mobilizing a pretty brutal counterattack with his remaining troops that would have undoubtedly crushed the squads on the hilltop. I was sure this battle was going to be an American victory. This was a great game that saw the use of a timed airstrike and a timed artillery mission, both of which Dave and I had not used before.  The Battlegroup TORCH book is outstanding, by the way, and if you're a fan of the series and you don't have it, go buy it!

I thought my strategy to use the Panzer as a support-by-fire position and advance through cover on my left was sound.  I also liked Dave's plan of maneuvering with his infantry aggressively.  Battlegroup allows you to do things like that.

I did make a huge mistake by sending off my squad to guard the flank of the hill.  Their place was atop Hill 116 with the main effort and I sent them, and my last LMG stand, off on a fool's errand to guard my flank against Dave moving more troops down.  Frankly, I also was trying to cause more casualties and force more chit pulls.  I should have kept my eye on the prize!

All-in-all a great game and a very good time.  Perfect after a long and brutal week at work.

Posted by Disgruntled Fusilier at 7:04 AM