Dave came over Friday night and we played a very small "squad level" game of Battlegroup, this time in Normandy with the "screaming eagles" of the 101st Airborne trying to force their way through the German lines with the "Recce Screen" scenario.

In retrospect, this probably wasn't the best scenario for forces who are primarily composed of slow moving infantry, but we gave it our best shot and it was still a very exciting and nerve-wracking game for the both of us.

Interestingly, after playing so many eastern front games, this was the first time I actually struggled to make up the points with the Germans, as the US Airborne are more expensive.

The forces were composed of a German "Regular" Grenadier platoon, with the LMG upgrade, so both teams had MG42 bipod LMGs.  I thought that was appropriate for them.  The Germans also had an MG42 on a tripod, and a Stug III G.
The US forces had an "elite" or "veteran" (really the same thing in Battlegroup) airborne platoon, a 60mm mortar, 2 x .30 cal M1919 MMGs, a bazooka team, and a  6lb'r 57mm AT gun.  (I threw in a jeep tow for it even though we didn't use the points for the jeep).

We each had objectives to seize, along with a centrally located objective in the middle of the table.  Out mutual breakpoints are 15!  Some interesting observations about smaller games later on. 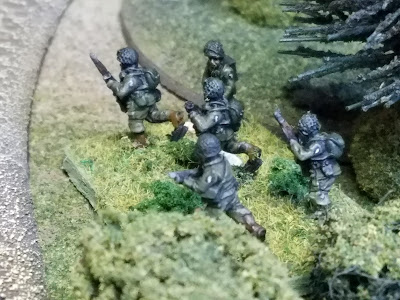 The Germans gain the upper hand in this knife fight, more to Dave's bad rolling than anything else, and the American para team is pinned!  "SERGEANT LARKIN'S HIT!  MAN DOWN OVER HERE!"  The GI's make a bold move to flank the wheatfield and threaten the objective.  They pour enfilading fire down the lane at the Germans! 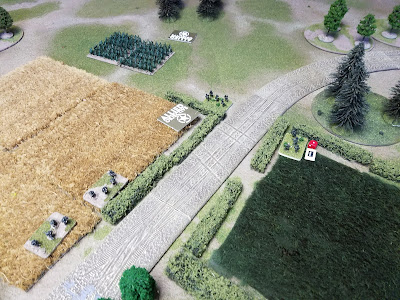 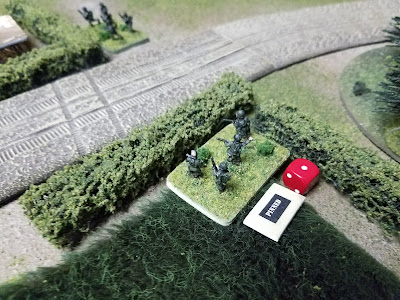 I keep rolling "1" for my reinforcements, meanwhile the entire 101st Airborne Division is showing up at Dave's table edge, but Dave isn't getting the orders to move them!  This fight is literally down to shooting between 2 squads. 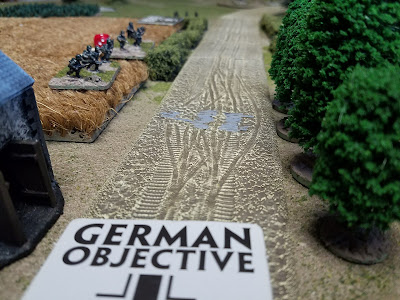 We're flanked!  But all is not lost - the Germans hear the clanking of tank tracks as teh Stug shows up on the scene.  They take up a nice, comfy firing position next to the barn and the TC starts to bang away with the MG. 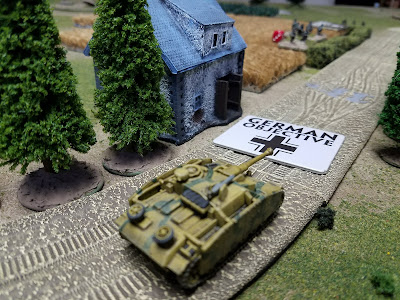 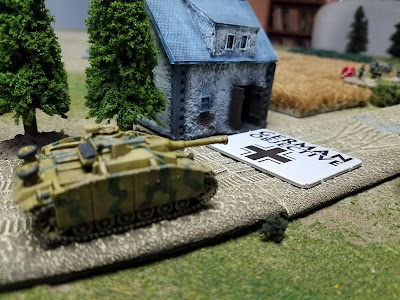 Dave gets his AT gun and the jeep driver floors the gas to get them into the fight!  (AT gun is from Game Models)  Besides the AT gun, the 101st gets their MMGs showing up as well.  All of the heavy stuff is coming onto the table and all I have is the Stug... 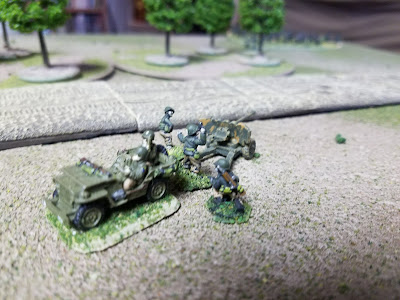 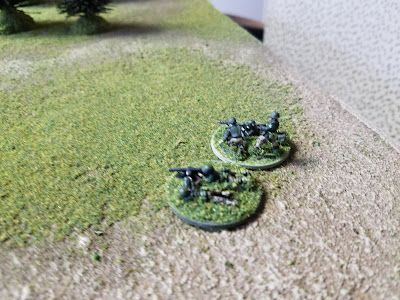 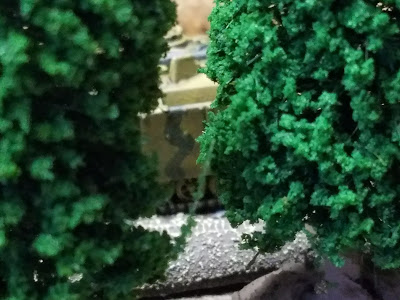 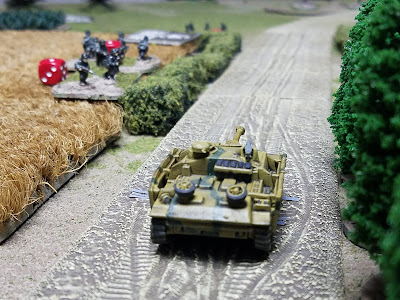 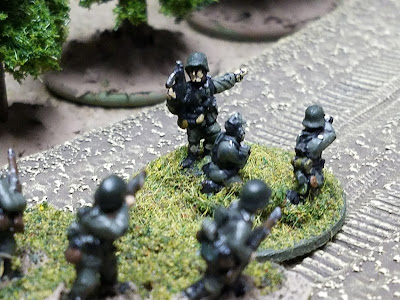 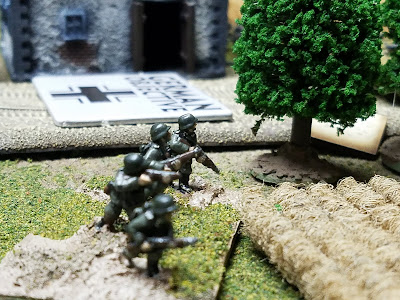 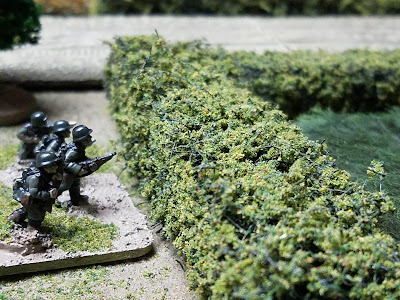 The American AT gun fires at the Stug and the round bounces.  The Stug gets a "beyond the call of duty" in the morale check, passes, and returns fire at the gun!  They kill some of the crew and pin the gun.  It's not looking good for the 101st at this point. 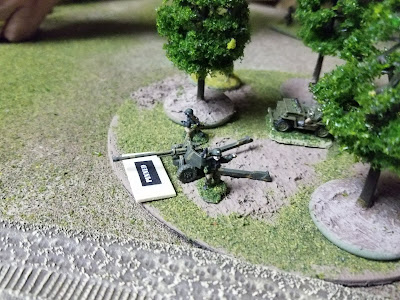 More American infantry showing up now.  The Germans capture the center objective, forcing another chit draw.  They're too strong on their side to allow an "all objectives secure" victory, but Dave's at about 13 for his BR counters now (I didn't know this at the time.  I'm at 12).  Dave goes for broke with his infantry squads, hoping to pin something to his front.  Unfortunately the shots are long range and tough to make.  Meanwhile my Stug is planning on focusing on the AT gun to knock it out.  All I know is Dave's got alot of chits pulled and he has to be close! 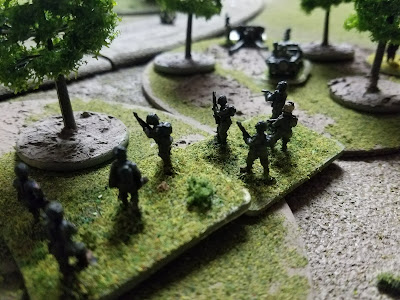 What an awesome game.  Probably not enough terrain on here for Normandy, and also the scenario was very "mobile" but you got the idea of a fast-moving, sharp infantry fight where the fighting broke down to section-on-section violence with anybody's guess as to who would win the day!

In my opinion, this was more like a "probe" by the American paratroopers of a position that is probably now well reinforced by the Germans.  The Americans will be back, and possibly with Armor and more Artillery and the Germans will be waiting for them!

One thing I'll note is that with smaller games, you can't afford to take as many risks as you would with a bigger game.  A "squad size" game forces you to really make tough choices when un-pinning, or risking an all-out attack.  For example this game was pretty much a large firefight with no close combats occurring since we simply couldn't afford to take too many chit draws.

Posted by Disgruntled Fusilier at 8:56 AM