MAJ Currie peered through the field glasses at the quaint village sprawled before him.  As his infantry were clambering up the far side of the Dives, heavy MG fire ripped through the cornfields in front of their position.  All of the open ground was covered by some kind of blasted Jerry rifle or machine gun.  "SERGEANT MAJOR!  GET THE MORTARS WORKING ON THAT FAR HOUSE!"  It was the biggest one in the town and offered a commanding view of the approach.  He grabbed the wireless set and starting directing the guns to open fire.  Armor churned up the dirt around them and sped quickly over the bridge which was covered by German Anti Tank Guns.

The Canadians are building up combat power on the far bank while Ken sends his armor on a sweeping run to avoid the PAK-40 AT guns in the town center.  More of Ken's infantry moves up under the cover of the RCHA 25 lb'ers who are doing an excellent job of keeping the SS troopers' heads down.

The Canadians prep their gear, drop their packs and the second platoon prepares to assault a German SS HMG platoon entrenched in a building overlooking the outskirts of the town.  The plan is to advance through the cornfields with the tanks offering some covering fire with their MGs.  It's a solid plan as the Germans only have 2 MG sections within the building.  MAJ Currie watches from the far bank as the attack goes in.  He whispers a prayer under his breath as the lead elements make contact.  The staccatto of machine gun fire and the "whump" of multiple grenades exploding signals the start of the assault.  Even though MAJ Currie is in relative safety, he knows how these things can go. 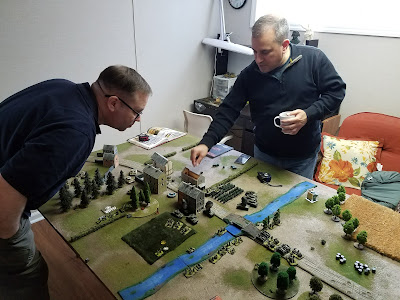 The last of the German armor, veterans of the Caen campaign, roll up to the front.  Their Panzer IV's moving at top speed churning up dirt and grass chunks.  Off to the left they spot the Tigers in Saint Lambert and one of the Tigers' main guns fire, knocking the dust off the Tiger's turret and glacis.  That tells the battle-hardened tankers everything they needed to know.  Enemy ahead. 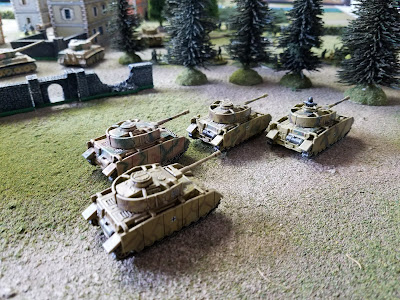 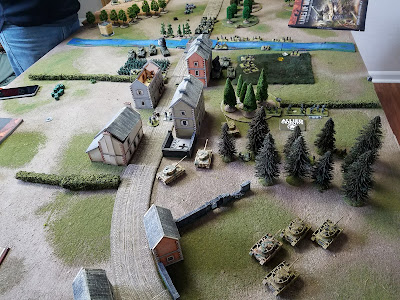 The second platoon assault into the house overlooking the causeway is successful!  They overrun 1 MG section and the second one jumps through house windows to escape.  The Canadians have a toe-hold in Saint Lambert now.  MAJ Currie sends everything he can across now, and deploys the AT guns on the left flank, on the near bank of the Dives. 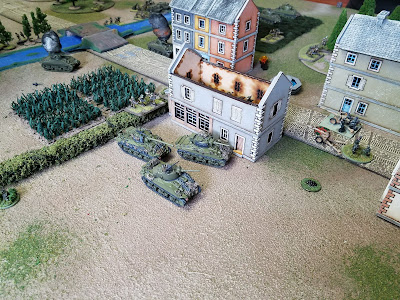 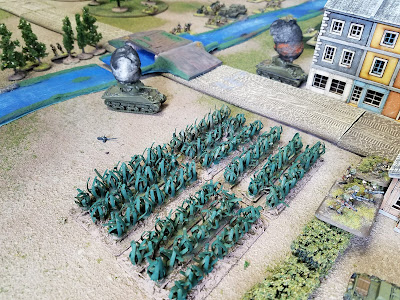 Ken's infantry, flush with success, enter the woods where 2 more SS teams are sent packing.  He moves up against the Platoon Leader stand into an assault.  The SS lose and break contact to the opposite treeline with the mortar platoon. 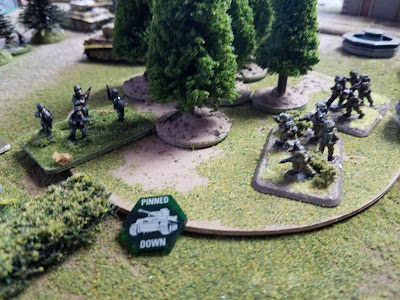 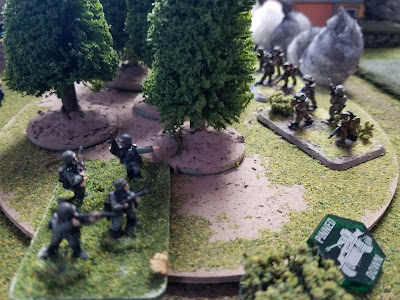 One of the Canadian tank platoons moves in a sweeping end-run around Saint Lambert.  The platoon commander sees the Tigers clear as day.  "OKAY FELLAS WE ONLY HAVE ONE SHOT AT THIS AND IF IT GOES SOUTH WE'RE DONE"  he calmly speaks into the wireless.  "WE'RE DRIVING RIGHT INTO THOSE TIGERS.  ABLE-ONE, YOU GUN THE ENGINE TO THE RIGHT TO GET A FLANKING SHOT.  ABLE-TWO, I WANT YOU TO DO THE SAME ON THE LEFT.  FOX THREE THREE, YOU SIT BACK AND COVER US.  OUT."  The tank commanders thought the lieutenant was crazy but they knew the Sherman's strength was in it's speed.  The plan could work, but they didn't like the odds... 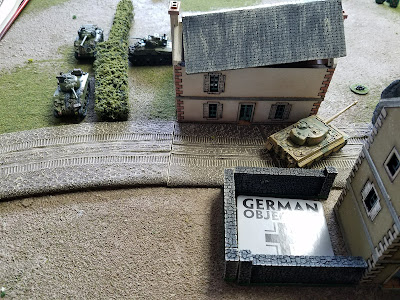 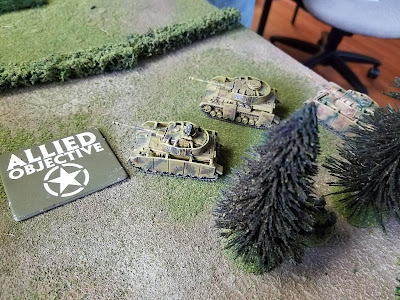 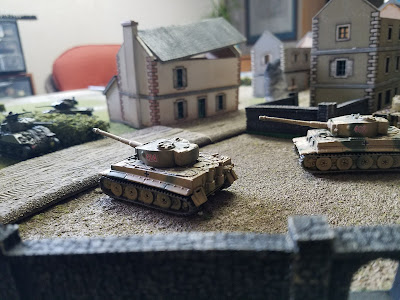 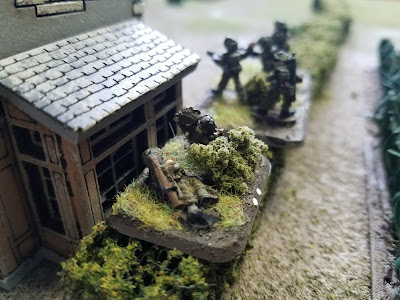 The Canadian 6 lb'ers start taking a toll on the Panzer IVs and the German mortars fail to range in their spotting rounds to drop smoke on them! 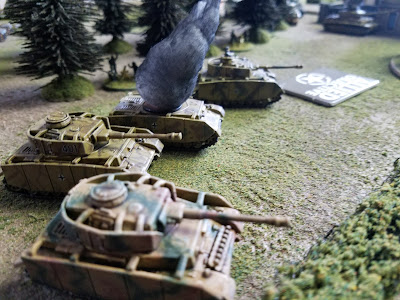 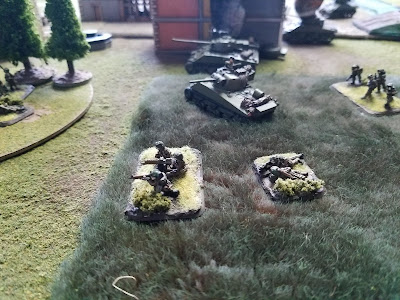 Lieutenant Miller's plan is a smashing success!  The Shermans storm the Tiger position and KO one tiger, then another.  The reamining Tiger bugs out after failing his morale.  The Canadians also use their artillery to blast the infantry out of the next house.  without any infantry to hold or contest the German objective, the battle is over.

POST GAME
This game was a ton of fun but Ken and I were frankly surprised at how many questions we still had regarding Flames of War.  Still, though, no shortage of tactical decisions to be made.  Lots of maneuvering, shooting, combined arms action, and excitement.  Ken really made the most of assaulting across the river, and also made great use of all of the assets at his disposal.  Additionally,

I've found the Germans are good at defense, but are also very well suited to maneuver with their skill level (the Germans i used can carry out more complicated moves like "shoot and scoot" etc easier than other troops).  So in retrospect, I could have made better use of them to break contact and possibly launch swift counter attacks.  Maybe something to think about as the Falaise Gap campaign expands.  Next up is the eventual German counter attack!  Stay tuned!  There are 5 more scenarios in the pack!

In other news - some minor painting progress made with MERDC M1 Abrams tanks rolling off the assembly line in 15mm and in 6mm 1/285.  Also, Prussian Cavalry for the Waterloo C&C Napoleonics game this summer on the workbench.  Lots of great gaming coming up!  Need to switch gears back to World War III again, hopefully with Cold War Commander in the Fulda Gap.

Posted by Disgruntled Fusilier at 6:37 PM