This year I've really been trying to stick to my plans and that means painting American War for Independence troops.  The good news here is I only have a very small amount of units left to paint.  This is one of them - the famed "Jersey Blues" or 1st New Jersey Regiment.  In an effort to bolster my forces for my upcoming Germantown game, I realized that I need a few more units of British and Continentals in 15mm to make it happen!

I've always loved the uniforms of the mid-atlantic colonies and their military forces during the Revolution.  You see lots of browns and blues in the uniform coats and the New Jersey regiments had some very unique uniforms with red shirts, light blue on darker blues. etc.  Here the regiment is depicted in all its blue clad glory!  Truth be told there are many misfit troopers in here in various kinds of kit, however with the precarious American supply system I figure these men used what they could get their hands on.  Either way, it all works! 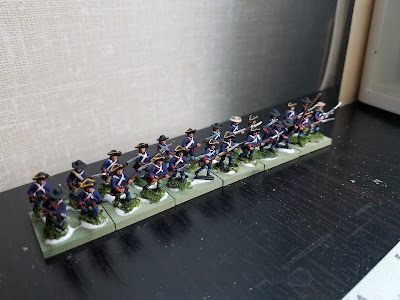 Posted by Disgruntled Fusilier at 6:27 PM