The first game of the 2017 turned out to be a Hail of Fire game featuring a US Infantry Company and Tank platoon trying to break into a town held by sneaky, elite Germans.  Lots of forested terrain so I imagine this to be a German border or eastern France scenario here.

Anyways to the action.  2 "Regular" US Infantry Platoons, 1 Sherman Platoon, along with a MMG Squad and FO section in support with 105mm guns standing ready.  The Germans were defending with 1 x elite infantry platoon, 1 Heavy Weapons platoon consisting of a PAK 40 AT Gun, a couple MMG stands, and 3 stands of medium mortars.  An FO supported the mortars in his Kubelwagen, and there was a platoon of 2 x Panthers and 1 x elite infantry platoon in reserve.  The US had the first turn! 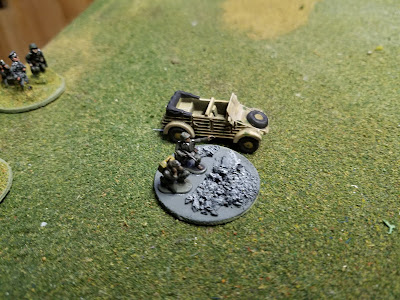 This was, I think, the biggest Hail of Fire game I've played so far.  While the author will probably kill me for this, I did experiment with 1 "departure" from the rules as written when dicing for orders.  I'll explain...
The Americans started off the attack moving the Shermans forward across the open field.  The Germans placed the PAK 40 to their front in the woodline where the US force placed its objective!
The PAK 40 did some terrible damage inflicting 2 KIAs to the Shermans before it got knocked out. 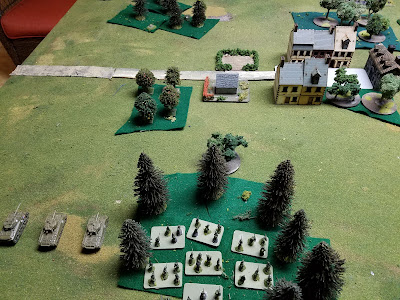 In trying to get the Sherman platoon back and moving again, the RFC is resolved and it's a KIA result for the other hit Sherman.  Meanwhile, while the battle rages, the US infantry floods into the orchard.  "We have the objective in sight!"


The Germans move their panther up to try and block the US advance but the infantry gets through.  It's important to mention here that my single diversion from the rules was an experiment in seeing how the game would work with each side having the chance of more orders each turn, so for the action points I rolled 2D6 per side.  This saw some very interesting turns of fortune but really allowed 1 side to develop their battle plan each turn.


At this point, all that seems left to do to nail the door shut is capture that small wooded hill on the US right from the Germans.  At that point, they'll have Jerry in a real jam. 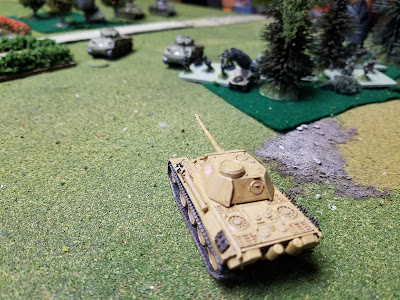 The US assault on the hill is wildly successful and they push the defending Germans back and kill all of the leading teams.  The subsequent morale check sees the German platoon "beat feet" back to the rear and this game seems to be the US' to lose.  And by that I mean the US is winning! 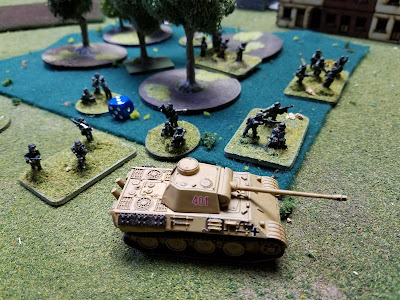 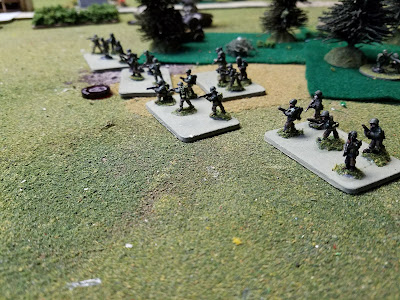 A firefight breaks out with the US infantry in the woods and, unbelievable, the German shooting over a few turns forces a morale check which they fail.  A US platoon, as well as the tank platoon, retreat.
Seeing this as his last ditch effort to win, the US player attempts to assault the Objective but fails the MC.  No more orders left!  The Germans move some of their reserve infantry up and more shooting sees the loss of more US teams. 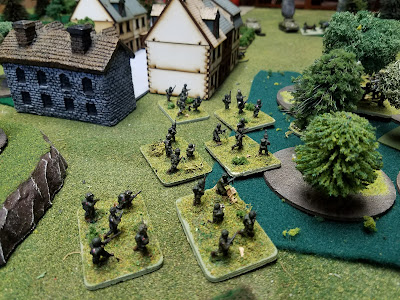 The US forces finally comes to grips with those Germans and loses the assault!  They are pushed back from the woods with only 3 turns left.  The US concede and gives the field to the Germans! 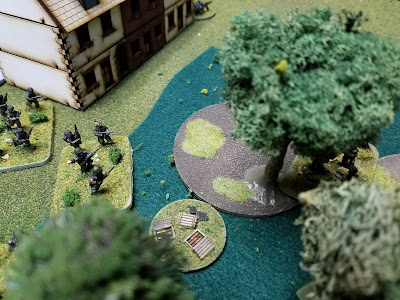 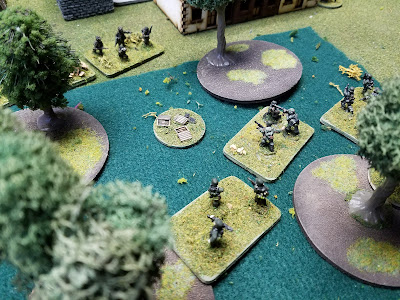 Thoughts
This was a fun game filled with considerable tension, and no shortage of decisions to make.  Turns out my placement of the German FO was bad as he was killed by the advancing Shermans in the beginning of the game.  The Germans could have made better use of the town but didn't, and the US player might not have needed to leave the safety of the woods around the objective to control the German player.  Even with more order points to be used, the US player botched the use of his artillery and the tubes lay silent the whole game.

I found that using more D6 for the orders made the game move a little faster (it's already a fast game) and allowed some more aggressive moves on the part of the attacking player, which seemed to be dictated by the points each turn.  That was interesting as at any random time, the Germans would surge with activity, and then the Americans would.  There was no determining when this surge would take place but I did enjoy using 2D6 for orders.

The hidden placement and revealing is neat as there are many more important decisions for you to make as the defender, including "where to put stuff."  By the way, those PAK 40s are nasty!  You've been warned!

All in all, a great game to start the New Year off right.  I think I'll play this same game, with the same forces using Neil Thomas' Intro to Wargaming WW2 rules.  Possible even Battlegroup Overlord as well?  Any other suggestions?

I'm also jonesing for a good game of Crossfire as it's been awhile.

Posted by Disgruntled Fusilier at 8:52 AM