Well I finally played the Battle of Hubbardton with my 15mm Musket Miniatures troops and the battle turned out fairly predictable.

Hubbardton was a rear-guard action fought by the Continentals against Brigadier Simon Fraser's advance corps during the Saratoga Campaign.  The Colonials were driven from the field however they bought precious time for General Saint Clair's Northern Army to continue its retreat from Ticonderoga and Mount Independence.  You can read all about it here.

The British held initiative the entire battle - a house rule I implemented to keep things historical as possible.  The British placed their Light Battalion in skirmish order and raced up monument hill to harass the Continental units (actually 2 x State Line Regiments, the 2nd New Hampshire and the 11th Massachussets).  In slightly straying from the historical norm, I placed Seth Warner's Green Mountain Boy hoarde in front of the woods at Sucker Brook to slow down the British advance.  The game opens with their duel at the woods between the British Light Battalion and the GMB.


The Green Mountain Boys routed after a brief firefight with the lights and fail their morale resulting in a move of 18" almost clear past monument hill.  THey would later rally and return to the field.  Meanwhile, Colonel Ebeneezer Francis, overall commander of the rear-guard and the 11th Mass Infantry organizes his defenses atop the hill as the British Columns deploy. 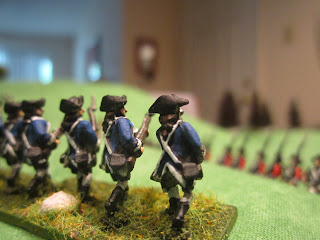 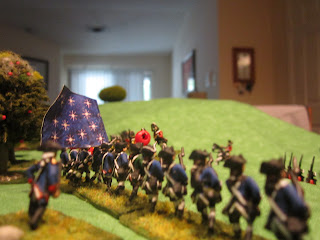 A vicious firefight occurs at the top of monument hill where each time the Continental Regiments are forced back, reform and return.  Meanwhile the 24th Foot turns to flank the Green Mountain Boys.  In a short and swift action they evaporate at the same time the 11th Mass routs, leaving the field conveniently on turn 8.  This was a British Victory, just like the real thing. 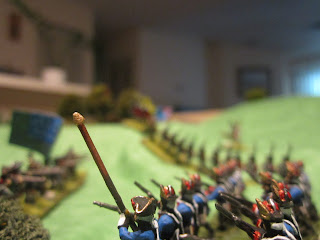 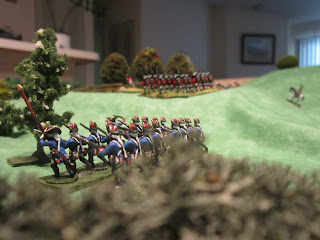 LESSONS LEARNED:
Well this is quite unlike Volley & Bayonet because it's played at a much more tactical level.  That being said, the importance of unit formations take on new importance.  Do you want speed to capture an objective?  Or do you want to maximize firepower while making yourself a more attractive target for musketry?

ENSURE THE FORMATIONS ARE PRACTICAL FOR THE MISSION AT HAND:  I placed my Grenadiers and Regulars in a Close-Order formation to maximize their firepower almost 20 inches away from the objective when what I really needed was speed.  I am not sure why I did this, maybe to try and accommodate multiple formations coming out of the woods?  Either way, they should have been open-order until I reached the base of the hill.

KEEP MILITIA AND IRREGULARS BEHIND COZY FIELDWORKS AND PREFERABLY WITH REGULARS AT THEIR SIDES AND FLANKS:  Irregulars and militia-types need the security of a more trained unit having their backs, especially if you want to gain vital modifiers during combat.  Putting the Green Mountain Boys alone and directly in the march-path of the world's mightiest, well trained, and best equipped Army in 1777 might not have been the best course of action.  As such they routed and retreated as far as possible within the confines of the rules.

All in all, I love Guns of Liberty.  What a great rules set and well thought out.  You get a good feel for actions in North America during the latter half of the 18th Century and troop training and experience are very important.  Musketry is definitely given a back-seat as it should be given the historical casualty rates.  I love that the D20 is used as the number you must roll is constantly changing and being modified to suit your unit's situation.  Also the Extra bonus that regulars get for firing the first time is a God-Send.  Excellent rules and I have missed playing them all these years.  Huzzah!
Posted by Disgruntled Fusilier at 11:04 AM 4 comments:

Played a 1500 point encounter battle today with the aim of seizing a crossing over the Dneiper River.  Germans fielded a Battalion-sized task force with the Russians throwing at them a highly mobile task force of mostly T-34/76 tanks, a KV-1 Company and a Company of SMG infantry.

There were alot of firsts with this engagement as you will see.  THis marked the first time I used my new "battlemat" which was a textured green fabric I bought in Montgomeryville last night (also bought a desert mat and an ocean/sky mat!) The scenario was a meeting engagement however both sides had the aim of seizing the bridge in the middle of the map.  Let me know what you think of the cloth.  I think it looks good - just needs crops, some lichen and more trees next time.

DAS PLAN...
The plan for the Germans was to rapidly move 2 elements to their pre-assault objectives, allow the Luftwaffe and the Artillery to soften up the far side, then assault it rapidly.  The Soviets planned to rapidly march into the town of Pereshchepyne and deploy a defense against the Germans.  Both plans were sound however fate would intervene on the Soviets' part today.  It's noteworthy that the Soviet heavy KV-1 Company never passed a single command roll the entire battle (a first for me).  Their mission was to provide overwatch of the crossing and escort the FAO to plaster German positions with smoke.


Timing in war is everything.  The Soviet armor rumbled towards the objective with no artillery support, and no heavy tank support.  So really the battle was between an armor heavy German task force and a Soviet Armor battalion, since the KV-1s never got to play.

The battle started out with a brutal tank fight with the Armor battalion trading cross-river shots with the German Armor Company (Mk IVs).  The Germans called in a Stuka and were able to score some impressive hits against the Soviets.  At this point the Soviets hunkered down, dismounted their infantry from the Armor and waited for the Germans to cross.  Every move by the Soviets was covered by the Tiger Is on the opposite shore...

The Soviets made it to the Southern Bank and UNBELIEVABLY a Command Blunder caused them to retreat "half a move" which translated into 15 centimeters.  This would cost them the bridge and ultimately the battle as unrelenting German gunners forced "fall backs" and pushed them farther from the Bridge entrance, while artillery and dive bombers pummeled them behind the ridge they were using. 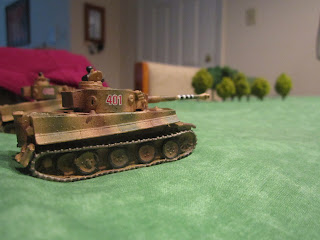 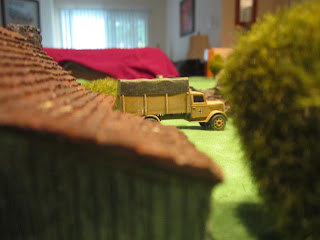 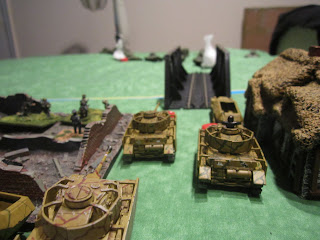 The next series of pictures are a little backwards but they represent the German bridge assault and subsequent  close combat that occurred as a result.  The Germans seized the bridge and barely won the melee on the far shore.  THis battle was a German victory as the Russians reached their breakpoint, ending the battle.


LESSONS LEARNED:
This was an epic battle - really huge with combined arms assets, aircraft, artillery - the whole 9 yards.  Probably the biggest BKC Game I've ever played Solo anyways.  Here are some things I learned this time around:

TRACK YOUR ASSETS!  With all of the crazy things going on, you have to remember what you've got in your toolbox.  I forgot as the German I had a heavy mortar to use in conjunction with the Artillery.  The Soviets additionally didn't even consider their artillery until turn 4.  Write it down.

USE SCHEDULED ARTILLERY TO YOUR ADVANTAGE!  Pre registering as the Russians is the safe bet as your crappy FAO might not be able to get the job done on time.  Comrade Stalin and STAVKA will be pleased to know you have planned accordingly and your artillery will automatically fall when / where you want it to.  That being said, ensure your FAO takes a covered and concealed route while moving because he could be blown away by Tigers at the last minute like mine was.....

KEEP A RESERVE!  I think it's a good idea to conserve a platoon or 2 as a Reserve element incase things go south.  IN this case, the Russian KV-1s don't count because I fully intended to use them, they just never materialized on the battlefield.

INTEGRATE FIRE SUPPORT:  Pummeling the enemy with air, artillery, and long-range gunnery is the way to go, quite obviously and guaranteeing you will make the most of your rolling, especially if you don't roll well like me.

All in all a very fun engagement.  Now the Germans hold the bridge and I will fight a "Bridgehead" scenario from the Rule book most likely next week.  This battle will culminate on an attack on the Kharkov suburbs, much like the I SS Panzer Corps' attack in real life, although this battle occurs during the Summer/Fall months and not the late winter.  Huzzah!
Posted by Disgruntled Fusilier at 1:10 PM No comments: