The Newest Addition to my Miniatures Collection!!

I don't know if I would call her an addition to my Toy Soldier collection, but she's definitely going to be helping daddy with some terrain projects when she's old enough.  Under the guise of "arts and crafts" of course!


Hopefully this is a good enough reason for a small lack of postings!  Huzzah!
Posted by Disgruntled Fusilier at 8:47 PM 10 comments:

Email ThisBlogThis!Share to TwitterShare to FacebookShare to Pinterest
Labels: Christina

The UAV shot I posted yesterday is part of the battle I am posting today.  This action was an American raid on a Sunni insurgent leader's house in Tarmiyah, Iraq, however things did not go off as planned for the Americans, as they disrupted a major gathering of terrorists prior to an operation.

What ended up happening?  Well for starters none of the targets of the raid were even in the house and instead a security element ambushed 2nd squad as they were moving in their bradley IFV to surround the house.  Intense RPG and rifle fire erupted from the grove and 3rd squad was ambushed as they stormed the house by stay-behind security elements.

This battle didn't go well for the insurgents, who were only able to knock out 1 US fireteam in the end of the game.  The US player, through some sh*t hot rolling was able to establish the platoon headquarters and M240 section atop the house and pretty much owned the insurgents the whole time after.

Every attempt to form a crossfire via radio succeeded, whereas the insurgents never got to use their Improvised Explosive Devices.


What an awesome game and if you look at yesterday's post, I had a little fun with powerpoint and made a fake Predator Feed screen complete with made-up telemetry data.  I am really going to use that technique from now on as it's a lot of fun.

This game didn't see the use of all of the vehicles as the action was just too fast moving and there was literally so much cover that it was an infantry fight from the get go.  I also think the presence of the US Squad around teh Bradley protected it from more units throwing RPGs at it.

This battle saw the insurgents not prepared like my previous Crossfire action in Al Amarah, where the US barely won with heavy casualties.  In this instance, I diced for Insurgent starting positions and it made for a much more fluid game.

Rolling for Rules of Engagement and requesting permission to engage a mosque, as well as trying to form Crossfires via Radio (rollinga 4+) was alot of fun.  Same with requesting attack aviation.  More than likely, if we're talking about an operation in Tarmiyah and a major raid planned, Attack Aviation would already have been present.

Tons of fun!  Huzzah!
Posted by Disgruntled Fusilier at 11:40 AM 9 comments:

Ben from Ben's Soldiers...
This is for you.  I was trolling around the internet today and watching some devastating hellfire and 30mm attacks via Predator drones and Apache Gunships and thought up this all on my own.  It is UAV "footage" from a recent game I played showing the orchard and palm groves in back of the mosque during a US raid.  I hope you enjoy!
Since this was a small part of a much, much larger game, I'll let this image settle in and hopefully post pictures tomorrow.  I just thought this was a cool picture, which I will let speak for itself.

"SIX, TWO SIX ACTUAL THIS PLACE IS CRAWLING WITH A - I - F DOWN HERE I HAVE NUMEROUS ENEMY POSITIONS IN FRONT OF MY TRACE, REQUESTING ATTACK AVIATION AT FOLLOWING GRID - STANDING BY TO SEND MY PUSH, OVER.

The game was set for a raid but rolling for Iraqi position setup, most of the troops, to include the target of the raid, started in defensive positions in back of the building.  As you can see from the orchard, a Bradley moving up into position makes heavy contact while 2nd platoon elements can be seen dismounting the Brad and also in the copse of trees next to it.  Out of the picture to the upper right there are blocking positions of humvees with fireteams who will eventually swing into action.
Posted by Disgruntled Fusilier at 10:10 PM 3 comments:

Just got my snazzy new Axis and Allies Naval Miniatures starter set in and immediately put them to work.  The mission was for an American Task Force built around a large, heavy cruiser, the USS Montpelier, to rendezvous with the Australian Navy's HMAS Nizam and conduct a sector patrol hunting for a "large" Japanese surface group with land-based bomber support.

Finding and killing this Japanese group was critical to supporting future Amphibious operations in this portion of the South Pacific.... 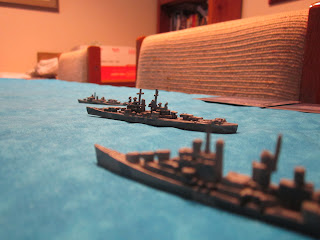 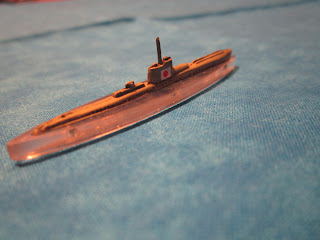 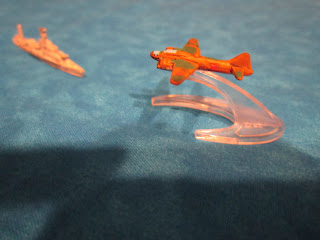 LESSONS LEARNED
This is the first time in history I've played a naval miniatures game.  I know "hard core" naval gaming enthusiasts would probably scorn me playing the Axis and Allies Miniatures game, but I have to admit, this game was addictive, easy to play, and tons of fun.  The systems are easy with not too much book keeping or clutter.  Dave F once told me the trick with naval games is to not make them feel like micro armor games on larger, blue tables.  This game captures the feel of the naval battle and is sharp, as well as unforgiving!  In fact I can see the need to collect more miniatures because ships are regularly being sent to the bottom.

Here are a few tips if they break out this game at your local gaming club:

KEEP YOUR FORCES TOGETHER:  The whole idea of destroyers "screening" your force is only good if you have a large number of them and can afford losses.  Since my task force was so small, losing the Nizam meant I should have consolidated and kept everyone together.  The USS Taylor went after the I-25 and was subsequently sunk.

IF YOU CAN MAKE SMOKE - DO IT TO CONCEAL WEAKER SHIPS:  Would have been great for my 2 small Japanese destroyers to escape the USS Montpelier's revenge!

STAGGER LAND-BASED BOMBERS:  Land based aircraft take an entire turn to refit so if you have more than 1, resist the urge to use a huge wave of bombers in 1 turn and ensure you have continuous coverage of aircraft.  In this way, you keep the pressure on the other guy.

DONT USE AIRCRAFT AGAINST HUGE SHIPS:  They have an awesome amount of Anti Aircraft firepower and can bring down your planes in the blink of an eye.  Go after the smaller ships that your opponent needs to take out subs, etc.

All in all, the game was very enjoyable and alot of fun.  Plus the miniatures come 5 random minis to a box and you have to collect them.  So that makes the game even more fun.  I have Italians, French, a few German, and a bunch more British and Japanese so I'm well on my way.  This game is appealing because you don't need alot of terrain and the miniatures are relatively inexpensive.  I'm sold.  Huzzah!
Posted by Disgruntled Fusilier at 11:53 AM 2 comments:

Well there you have it.  The first-run of my LZ Xray project has been posted.  Here is a "stand" of US Aero Rifles (1st Platoon, B Co, 1-7 Cav) and an NVA Regulars stand for the Battle of Landing Zone X-Ray.  These stands will adequately represent squads for Vietnam Crossfire or Platoons for Cold War Commander.  (They are actually being painted up for a large Cold War Commander game).

The GIs are Command Decision mini's and are actually, upon further inspection, US Marines from early in the war, circa Operation Starlight.

However the reader will have to excuse the rough kit and "pretend" they are wearing US Army kit.

That being said, the large, yellow patches painted on their arms should help with your visualization efforts!

The NVA are painted in the old GW Graveyard Earth, which is my favorite drab-khaki color for totalitarian armies.  The special helmets are painted folk-art "ivy green" or some shade like that, that was purchased years ago specifically for their helmets! 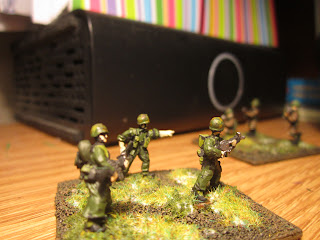 Posted by Disgruntled Fusilier at 8:39 AM 8 comments: