In continuing with my theme from yesterday, I present to you a fireteam, or small squad of Space Marines from the Salamanders Chapter.  These stoic warriors are completely bad-ass and as I'm reading the Salamanders Trilogy I continue to be inspired to paint more of them.  Unfortunately, I only own 5 so I'll have to purchase more...

These guys are kind of an evolution of painting style.  The lighter green ones are painted from a youtube instruction cleverly titled "how to paint salamander space marines" and are an evolution of different coats of various shades of green paint.

Anyways, these guys will be my Space Marine bad-asses for Disposable Heroes Sci Fi.  I plan on fielding 2 "fireteams" of 2 marines along with the Marine Sergeant, for a total of 3 teams.  I am giving them a rate of fire of 3 (maybe 4...) per marine with possibly an accuracy of 6, depending on how the test game works.  I have also devised some special rules for DH such as the "Know No Fear" rule, but I will unveil those at the first battle AAR!  huzzah!  or should I say...For The Emperor!!

Posted by Disgruntled Fusilier at 10:31 PM No comments:

In the spirit of good cooperation I decided to purchase Wargames Factory's terrific "Greatcoated Shock Troops" as part of my birthday extravaganza purchase.  These troops sport "fritz" German WWII styled helmets with crude 40k styled body armor and laser type weapons.  I thought they looked perfectly "grim" and "nightmarish" ...exactly what the 41st millennium reads like if you follow the GW story-line or read Dan Abnett.  Here is their description from "the Lexicanum":


The Blood Pact is a highly organized Chaos warrior-cult devoted to Khorne.
Unlike many Chaos cultist warbands, the Pact fights as a disciplined army, and this is what makes them so effective compared to the disorganized Chaotic masses. Consisting of highly trained, vicious soldiers and alien mercenaries, the soldiers of the Blood Pact know no fear or hesitation. They have overrun entire worlds and caused the people of the Imperium no small amount of suffering and woe.

These troops are painted up as Blood Pact - a unit of chaos cultists who are actually decent troops and certainly have the law of numbers on their side.  I will play them with the terrific Iron Ivan "Disposable Heroes" rules, using a 41st Millennium supplement I made myself.  If anyone wants to see it, I can provide a link to my Google Documents page where it "lives" now.  I have rules and stats for Guard, Space Marines, Orcs, and Blood Pact troopers.

The unit below is a squad but is more like 3 fireteams right now.  Each team has 1 support weapon.  I am currently repainting all of my guardsmen and will post them soon.  After that, get ready for some Sci-Fi Disposable Heroes action!  Orcs and all...  Huzzah! 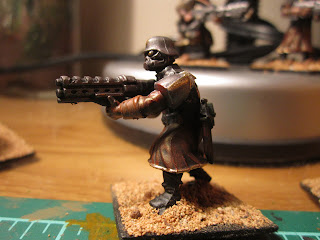 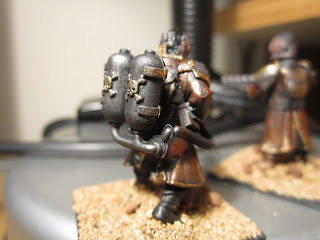 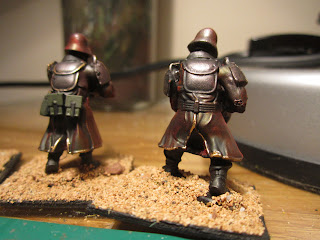 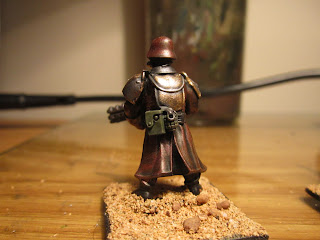 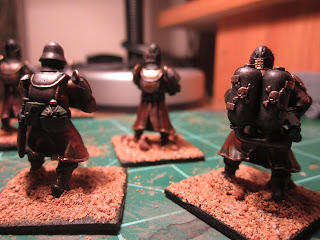 Here you go, Paul!  As promised:

Here is my first Battalion completed towards my LZ Xray Project.  These are hardened "regulars" of the 1/33 Infantry Battalion, PAVN.
I opted to spread them out on the bases in order to get that "these guys are trying to over-run us" look, as opposed to a tight fireteam.  That being said, they represent ad-hoc platoon organizations and are banded into Battalions.  Some of them will carry mortars or Recoilless Rifles into combat.  This Battalion does not have its organic weapons platoon with it...yet!
These troops are Command Decision's modern line, and some QRF in there as well as some Peter Pig.  Note the small size of the QRF and PP next to the CD line....
These guys will look great all massed together on the Battlefield!  Did someone say "Broken Arrow?"
Huzzah! 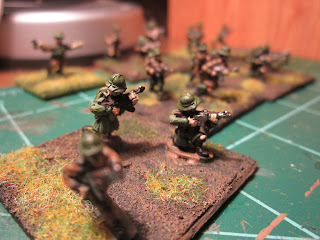 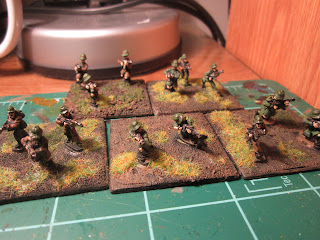 Posted by Disgruntled Fusilier at 9:48 AM 2 comments:

The rest of B Company from the 1st Battalion, 7th Cavalry in the famous Battle of Landing Zone X-Ray.  These guys are Command Decision Miniatures and are fairly easy to paint.

A couple things will restate that I dislike about them:  They are wearing Marine Kit even though they are advertised as Army.  Also not a huge variety of poses either, but they will def do.

I like how their bases turned out to look like mud with the obligatory ant hills!  These guys are based for a number of different rules sets to include Vietnam Crossfire and Cold War Commander.  I am planning on playing a large Cold War Commander LZ X Ray battle sometime soon....  Currently I have 1 Battalion of NVA complete, and 1 US Aero Rifle Company complete!  2 NVA Regular Battalions to go and 2.5 US Companies to go. 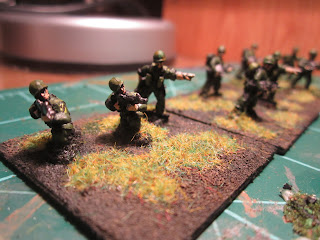 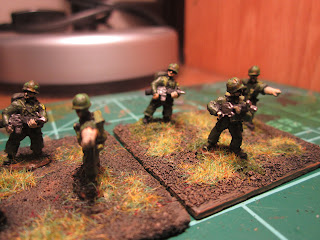 Found this on the Ski's Wargames and Stuff  and since I am at work with absolutely no prospect of painting in right now, I thought I'd fill out myself!

World War II probably because there are limitless options for scale (skirmish through division level), rules options as well as the scope of the conflict - you could play a battle in the frozen North Atlantic, the baking hot desert of North Africa or the steamy jungles of the South Pacific.  I really like World War II Tactical Conflict and Operational Conflict played with 15mm miniatures.  (was a tough call between WWII and the American War for Independence)

2.       Next period, money no object?
Well if money is no object, I would love to build a huge 10mm moderns force using the minifigs 1/160th vehicles,and I would buy enough for a full division of Soviets, a full Brigade of Americans, Brits, Israelis, and some generic "third world" forces. 7.       Favorite Wargames rules?
Volley & Bayonet.  By far, the best Operational-Level Horse & Musket Wargaming Rules.  Ever.  extremely easy to learn and good tactics are rewarded by good results!  Next up would be Blitzkrieg Commander, my favorite WWII Rules Set. 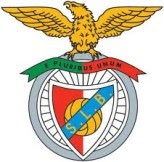 9.       If you had a only use once time machine, when and where would you go?
I would visit Napoleon on Elba and have lunch with him.

10.   Last meal on Death Row?
Chicken-Fried Chicken with Country Gravy, mashed potatoes, fresh green beans, corn on the cob, and a biscuit. With an ice cold glass of iced tea.  (basically straight off of the Cracker Barrel menu...)

11.    Fantasy relationship and why?
Have to second Ski's Answer.  Definitely my wife!  she has almost limitless patience for me, my hobbies, and for all of the incredible hurdles that life seems to throw at us.

12.   If your life were a movie, who would play you?
Michael J Fox from his younger days. 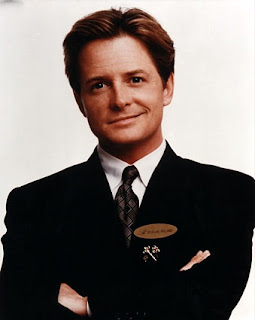 13.   Favourite Comic Superhero?
The Punisher.  He doesn't have any super powers except amazing intellect, wit, weapons, and a burning drive to punish criminals.  what's better than that? 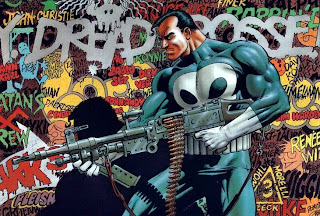 14.   Favourite Military quote?
"The whole art of war consists of guessing at what is on the other side of the hill."  Field Marshall Sir Arthur Wellesley

16.   Biggest Wargaming regret?
Giving away all of my painted plastic 1:72 ACW figures from college, taking on Dave F's painted 6mm minis (he misses them!) and literally throwing away hundreds of dollars worth of Epic Space Marine GW minis...to include the Imperator Titan, a Stormblade tank, and legions of Marines.

19.   Favorite Wargaming Moment?
2 moments stand out the most:  "The stand of the 10th Georgia Rifles" when I was in college.  Played an ACW game in college with my 1:72 painted miniatures and this one single Regiment, the 10th Georgia, through a strange anomaly of the dice, fended off multiple, heavy brigade assaults against it, hammering every unit that tried to come up the hill against it.  I repainted them with battle honors after that game!
Next was a Crossfire game against Dave F where my German platoon with supporting elements crossed a linear danger area where I thought was a safe area close to my assembly area.  I got caught in an American .30 caliber crossfire from some paratroops and my German platoon was chopped up so bad only a panzershreck crew and the platoon leader remained.  Was "fun" seeing the platoon knocked out one squad after another I guess...Ahh well it was a fun game anyways.

20.   The miserable Git question, what upsets you?
Gamers who are so egotistical that when their wargaming position falls, their ego goes with it!  I don't like whiners either.
Posted by Disgruntled Fusilier at 12:08 AM 1 comment:

"even a man who has nothing can still offer his life." - Imperial Infantryman's Uplifting Primer

I love GW's 40k universe as well as its figures.  I DO NOT love the GW rules system.  So I ended up shopping around until I found a proper set of skirmish rules to use within the GW universe.  That rules set is "Disposable Heroes," which is literally perfect for the level of combat that Warhammer 40K portrays.  Plus the 28mm guys are much more easy to paint.  I came up with combat values for Guardsmen, Space Marines and some elite troops from the 41st millennium.

I had a tactical squad of troopers painted up looking like futuristic Germans rather than Imperial Guardsmen and I ended up repainting one of them in their original khaki scheme with drab armor.

I also, for my birthday, received Wargames Factory's Greatcoated Shock Troops and Defiance Games' UAMC Infantry which I will use for Blood Pact Infantry and Kasrkin elite shock troops for "hard sci-fi" gaming. 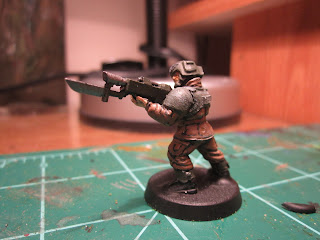 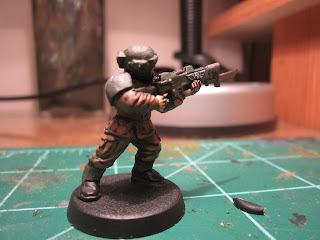 Next up will be my Chaos Blood Pact great-coated troopers!  After reading all of the Gaunt's Ghosts Series, I am definitely ready to paint up some blood pact cultist infantry.  They should be more than a match for the IDF troopers or planetary defense forces.

Also I am eager to play my own on-going saga of the Verdan rebellion, a weapons manufacturing planet within the imperium that revolts against its masters and is subject to a massive invasion...