A little later than I wanted but at least I'm getting it out.  Tank "week" looks like it will drag into next week at this rate...
To be perfectly honest, this kit took less time to build than this blog post is taking to write.  It was a busy last 2 days at work, but looking at a long weekend coming up so I'll have time to finish up the rest of the Armor that's laying around this place!

THis will round out some of my late war skirmish forces for my German army.  I don't need legions of these things, just one or two to round out the force and give it an edge.  Speaking of which, when I start up the figures again, I'll have to paint up another late-war German squad to protect this bad-boy on the outskirts of Berlin!

Enjoy the pics everyone.  British Airfix Scimitar coming up next!  Huzzah! 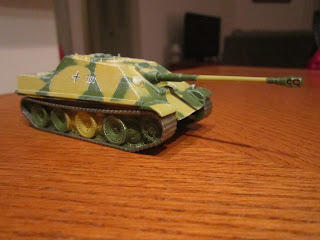 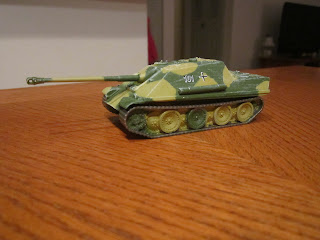 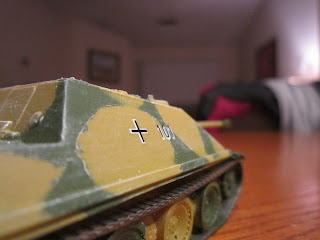 "Tank Week" begins here at Sound Officer's Call.  First up - the venerable M48 Patton fielded by the West Germans for my upcoming Hameln, Germany World War III Bridge Assault.  This is the Revell 1:72 kit and boy was it a nice one.  Barely any problems with pieces fitting and characteristically German instructions, which were excellent.  Sprayed a dark OD green on it to finish up, painted the tracks and roadwheels and then put on the decals.

Originally this tank was supposed to be a South Vietnamese M48, but projects are projects and first things first.  Now I have another one coming in the mail that will be assembled as a Vietnam era M48 for just that purpose.  Later on in the week, German WWII Armourfast Jagdpanther, Airfix British Scimitar, and maybe a surprise or two.  Huzzah! 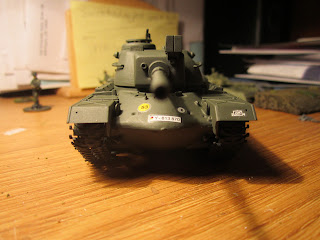 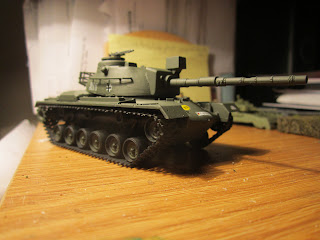 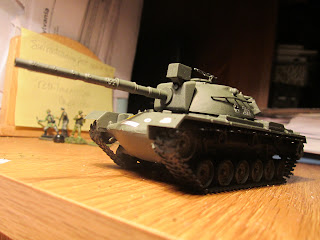 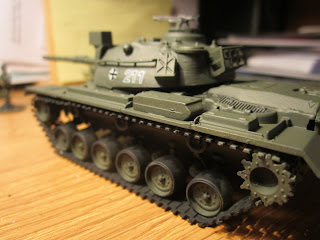 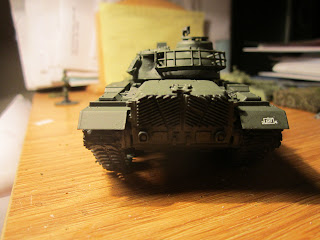 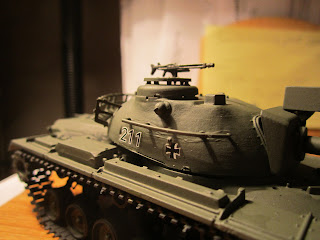 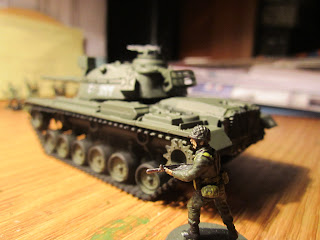 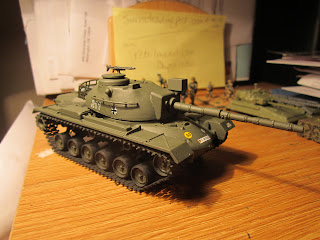 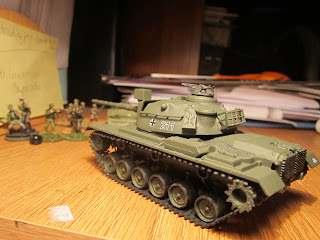 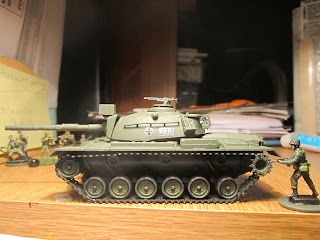 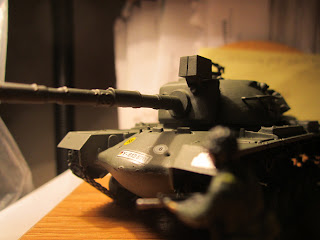 Posted by Disgruntled Fusilier at 8:41 AM 10 comments:

BAOR Regulars Part Two and Super-Haul of the Month

Finally got around to finishing off the second squad from the attack force at Hameln.  Right now just waiting for more reinforcements to get here in the mail (waiting on an M113 to round out the entire force).

I took Paul's advice and used a toothpick for most of the guys until I lost patience and used a small brush for a few of them.  I think they turned out, for the most part, better than the first batch but i'll let you all be the judge.

Today I also received the first batch of reinforcements in the mail - got the Airfix Scorpion/Scimitar, the Revell T-72M1, and my Armourfast Jagdpanther box for my late war Disposable Heroes skirmish.

Next up?  well we have the West German troops naturally, and their M48 tank which needs to be assembled and painted.... 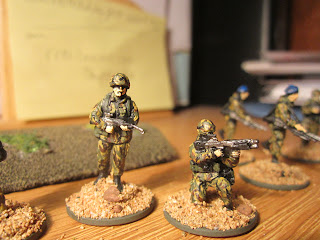 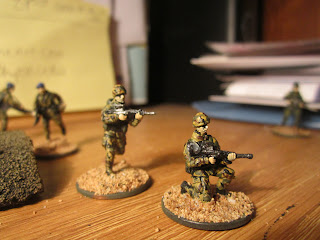 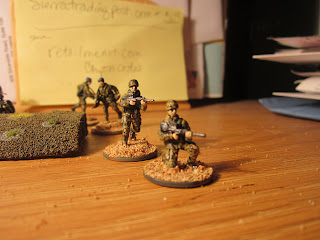 Here is the first batch of my British attack force for the Hameln Bridge Operation, an up-coming Seek Out, Close With, & Destroy game I'm planning for something in the near future.  Second batch is still waiting for their uniforms, but are equally as important as they have the 2 GPMG Sections!!  They will be fighting against Soviet VDV Airborne Troops to seize the Bridge over the Weser River in Hameln, Germany sometime in the early 1980s.

Troops are from 2 excellent sets - the ESCI NATO Troops, and Caesar Modern British Army.  The reader will kindly excuse the presence of "ultra modern" kit, however the ESCI guys had a very distinct lack of poses and I needed more troops to seize the position...

This is my first go at DPM camouflage and I got "advice" via the internet from "Tim's Miniature Wargaming Blog" at this link.  He gives an excellent tutorial on how to paint DPM camo and it turns out, the order in which you apply the colors is almost as important as the colors themselves.  The British troopers will ride into battle in the very un-sexy FV432 cleverly disguised as an even less-sexier M113 APC, but they will be very grateful for the added firepower via the .50 caliber machine guns.

Working on a West German Territorial Army unit now which will also take part in the assault with a host of troops and an M48 tank.  This should be an excellent battle with elite but lightly equipped Soviet troops, British Regulars with no armour, and West German Reservists with an M48 tank. 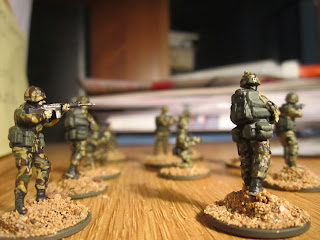 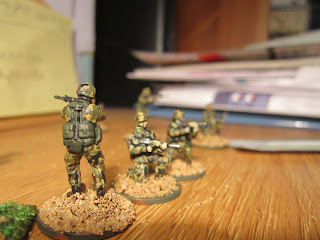 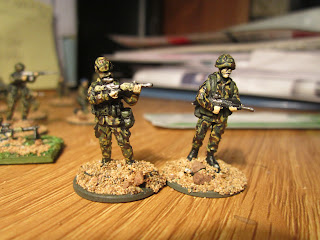 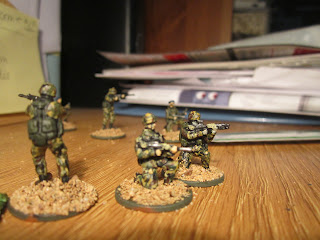 What's nice about these guys is I can use them as Falklands Brits just painting some of the berets maroon or green for Paras or Marines.  My West Germans could easily serve as Argies, and if I am lazy enough, I could just use my Vietnam Americans as them.  That would be a fun game - just need to find a 1/72 Scorpion tank - any ideas?  Brands?  Models?

So next up will be either the West German M48 tank, or the West German TA Squads. Once completed, I need to finish some buildings and rubble for old Hameln, Germany, and then we're ready to rock.  Probably won't come close to finishing this week as things are busy at work, however the following week is looking more promising.

Here is a topic that has been done, re-done, and then done again many times in the blog-o-sphere but here it is yet again - my Soviet Airborne Troops, or VDV as they are commonly known.

Going along with my World War III hobbying and gaming of late, these troops will take part in the battle for the Weser River Bridge at Hameln, Germany.  Ralph Peters' excellent book "Red Army" has the Soviets sending an Airborne Battalion to capture the 2 bridges over the Weser purely as a deception operation to draw British and German armor away from the battlefield, and falsely signalling to NATO that the crossing is vital to their operational plan.

NATO buys off and sends significant reinforcements to capture Hameln, virtually destroying the ancient part of the town and, (SPOILER ALERT) eventually wiping out the Soviet Airborne Battalion.  It's great reading however and makes for some really, really good wargaming.

Figures are ESCI and Orion. 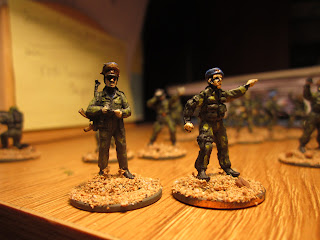 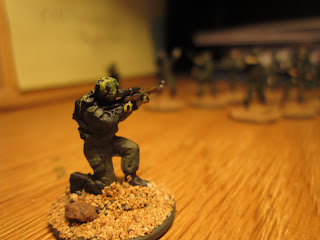 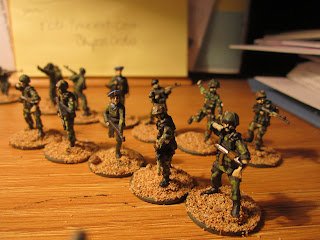 These forces are platoon in strength and represent an ad-hoc grouping of the Battalion staff, and the last surviving remnants of furious West German Territorial Army and British Regular attacks.  Their job is to hold the Thiewall Bridge over the Weser until Soviet Armor reaches them.

You and I both know that the columns will never arrive - but the troops don't know that.

I will game this scenario using the excellent "Disposable Heroes [rather appropriate name given the scenario] Seek Out, Close With, and Destroy" skirmish rules.  I will cover the scenario, the British and West German Forces, and the terrain over the upcoming days.

Posted by Disgruntled Fusilier at 8:16 AM 6 comments: