After a day of assembling Swedish furniture I'm beat and my hands are blistered beyond recognition.  That being said, I'm not too sore where I couldn't snap a few pics of my Sci Fi concept troopers.

The weapon team and the individual trooper are completed, along with some more troops and models that will supplement any future force.

Again, the team has a neat, neo-soviet look to them but they will serve as rebel forces on a distant, cold planet.  The heavy man-packed laser taken off of an ambushed vehicle convoy of some sorts.
The trooper has a nice, "corporate" look to him as sort of a security force for a mining settlement, not quite a "drop trooper" but not quite militia either.  He holds either a solid-shot assault rifle or some sort of small laser rifle. 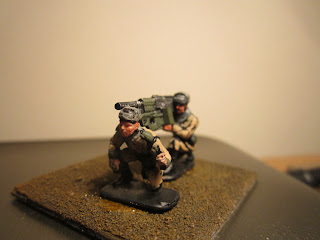 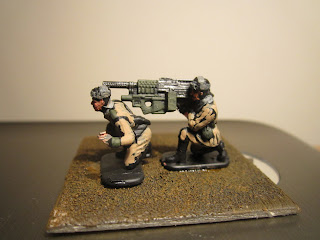 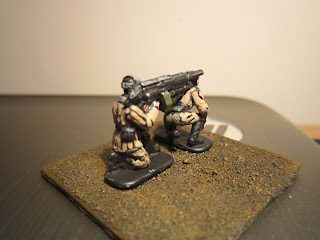 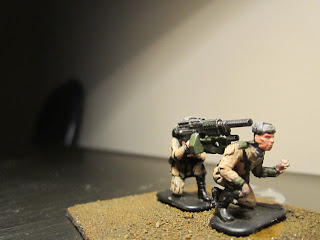 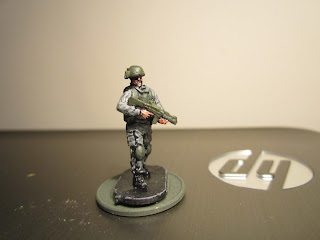 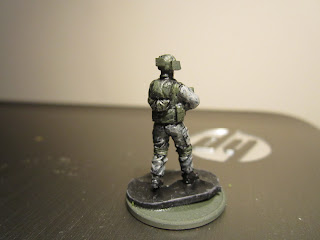 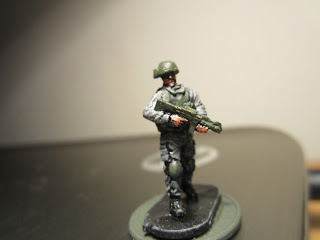 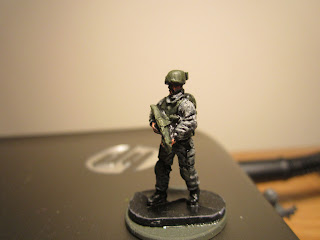 The next round are unpainted concepts to be tried out.  First up are a completely new concept for a historical guy like myself - walkers.  While the idea of drones are completely mainstream now, walkers are an idea that is right around the corner by a generation or so.  Practically all-terrain and almost perfect support platform to carry heavy support.  These walkers fit into the 20mm realm nicely and are automated machines, and do NOT contain a human being.  They will fill a scout role on the battlefield - dropping in and advancing until they make contact with enemy forces.  They also fulfill a myriad of security details as well.  Cheap, effective, and highly mobile - I'm designating them the Stalker M485 Mk I and Mk II.  The Mk II is armed with a light plasma cannon and capable of engaging large walkers, or AFVs.  The Mk I is simply a scout armed with light missiles and a light laser weapon.


Finally my next batch of troopers, more heavily armed.  These are regular infantrymen of the future.  All armed with laser type weapons (which look suspiciously like FN SCARS to me..) they wear ballistic helmets with visors for Heads Up Displays.  Their armor is still humble and designed to protect primarily vulnerable areas from small arms, shrapnel and very light laser fire. 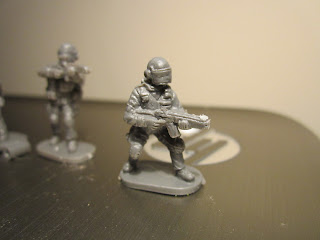 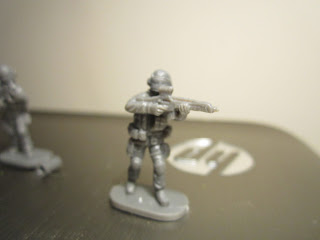 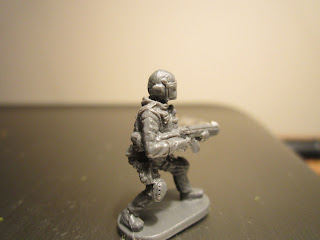 I am planning on using a myriad of rules to support Sci Fi battles to include Future War Commander and FUBAR to name a few.  Maybe I will even write my own.  Right now am waiting on a few APCs to be delivered to the house but will be building some French APCs along with some US Strykers to serve as futuristic APCs.  Also going to be buying a few tanks to support.
Posted by Disgruntled Fusilier at 2:53 PM 12 comments:

Sorry for the hiatus!  In the process of moving...That's right - SOUND OFFICERS CALL is going to get some permanent digs!

Ordered some Dark Dreams Studios 20mm "Space Battles" troopers and got to thinking about doctoring up some of my own 20mm troops for some "hard" sci fi battles using FUBAR or a home grown rules set, strictly human against human battles.  That, and most of my minis are either packed up or at the new house and these guys were all I could scrounge up.

The weapons team is a 28mm support weapon that was affixed to a 1:72 Russian trooper.  Cool as they have that kind of neo-Soviet, planetary defense force, or rebel look about them.
The individual is an Israeli soldier with just a few modifications to his weapon and some widgets glued to his helmet. 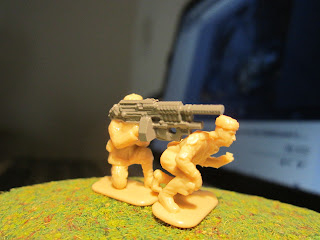 Greetings All,
Played a very down and dirty game of Seek Out, Close With & Destroy Sci Fi this afternoon with some makeshift rules and values for Disposable Heroes/SOCWAD games set in the "grim, dark nightmare of the [far future] millenium."

Game featured a small action between 2 patrols, a Guardsmen patrol and a "Sanguine" Pact patrol to reconnoiter a station outpost on a far, distant planet.  I had a whole story line developed, but this post is long enough as it is...

No large support in the way of artillery, air, or vehicles.  Just straight up infantry teams going at it.  The Guardsmen did have a "heavy" crew served weapon with them, as well as light support weapons with each fireteam.  The Pact troopers had light support weapons and a flamer to use.  The ending will surprise you. 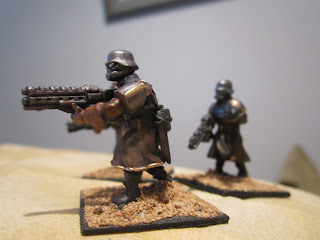 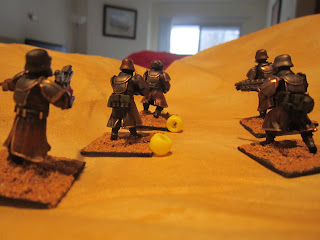 Game started out with both sides advancing from their starting positions.  The Guard lucked out and started in close proximity to all the buildings and the good cover.  The Pact did have the advantage of higher ground but no weapons that could range the Guardsmen yet...


The game was a turkey shoot so far for the Guard.  Any time a Pact trooper showed himself he was treated to a fusilade of heavy bolt fire or lasrifle fire.  The left most squads started to withdraw under the pressure.  Then the Guard broke from cover to attempt to hunt them down.  By now most of the pact was in cover of their own - a whole new game at this point! 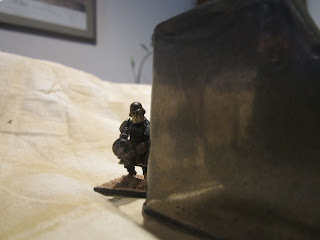 The reversal of fortune at the barracks was staggering.  Unbelievably, the Guard officer loses his morale check again and breaks for cover - with another Guard fireteam coming up to assault the barracks.  The pact troopers move to the rear of the building.  It's gonna be a long day...

They pass the morale test to close assault the barracks but are all wiped out either in snap fire or close combat.  3 successive assaults on the barracks are beaten back, with 1 pact fireteam holding the barracks along with their evil, fanatical officer.
What a reversal of fortune.  Seems that the force who stays hunkered down in cover has a great chance of staying alive.  That was the guard at first - but then they had to root out the enemy, switching the roles around.  The officer actually failed all of his morale checks and ran off into the desert.  I hope the heat kills him before the commissars find him...

Well this was an experimental battle testing out my SOCWAD Sci Fi tweaks against the rules set and they worked out well.  I have already played some very, very small battles with my "Galactic" Marine troopers and, true to form, and all the damn 40k books I've read, they are able to mesh with the DH system nicely.

Not too dominant, but a very, very dangerous opponent.  In other games, 5 marines, split into 2 fireteams, were able to hold their own against about 20 pact troopers.  Granted they were wiped out completely, but, like I said, it "feels" right.  Now onto the tactics!

Suppress the Enemy:  This mantra of the modern military professional holds true in DH, and, as it turns out, the "grim darkness of the far future where there is only [Disposable Heroes]"  3 and 4 man fireteams are efficient especially if you have a light support weapon, but if you can't combine your firepower with quick, aggressive action, you've relegated the battle to 2 sides taking pot-shots at each other until someone wins.
When 1 team suppresses for a turn or 2, send another team around their flank or in their general direction.  Their teams will inevitably fire on your advance unless you can cover the ground quickly, with supporting fire.

My rule of thumb would be to have the entire squad (2 teams) fire for 1 turn, then send a team in next turn.  I'll have to try that next game.

Go Big, Go Fast, Go Early: My blood pact troopers in little teams were no match for a heavy crew served weapon with a ROF of 5 and a morale modifier of -3.  Moving out with the entire squad not only increases your assault chance for success in the advance, but ensures you have enough bodies for the inevitable close combat to follow.

Assign Cover Values right away: More for scenario design and a good rule of thumb for any gamer/scenario designer.  I kept forgetting what the cover values were for each building, bunker, etc.  Would have been nice to have written down but I was in a hurry...

Next time I play this, I will most likely incorporate artillery, air, and of course vehicles and more troops into the fray.  had there been a commissar present, he could have shot the officer and taken over but it wasnt to be.  I need to paint up more marines and scouts, as well as a huge host of greenskins and see how I can work them in as well.  Not to mention more pact troopers.