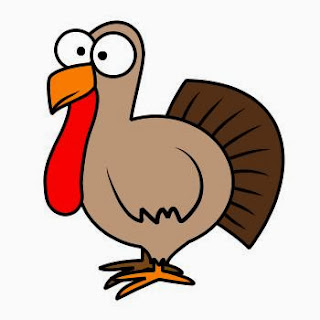 Here is a link about the History of this wonderful American tradition.

Here is a short list of wargaming widgets and things I'm thankful for:

Plastic Soldier Company "Black Boxes"
Zvezda Art of Tactic 1/100 Miniatures
Folk Art "Pebblestone" Acrylic which has turned out to be a very versatile color!
Amazon and their magnificent used book collection, allowing me to purchase all kinds of wargaming materiel at a fraction of the cost!
Great friends and blog followers who post kind comments, even when I think my work is horrid!

Posted by Disgruntled Fusilier at 8:54 AM 2 comments:

Email ThisBlogThis!Share to TwitterShare to FacebookShare to Pinterest
Labels: Thanksgiving

The World War II MTOE (modified table of organization and equipment) project is in full swing!  The first of those piles of plastic and pewter on my desk are finished.  These minis are a combination of Command Decision 15mm and Point of Contact plastic models.

I painted all with an undercoat of black then Olive Drab, dry brushed with a light tan.  The tracks are black and metallic dry brushed and there are some decals on each tank.  The platoon leader's track has decals on the turret as well as the hull to differentiate 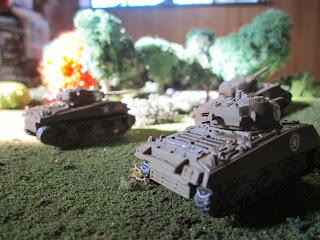 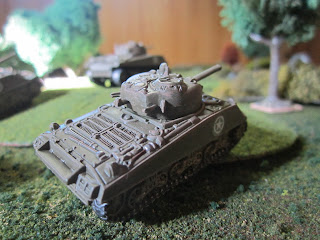 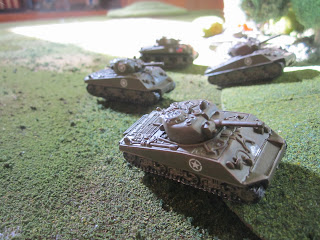 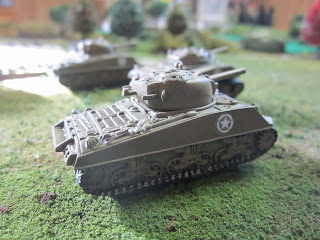 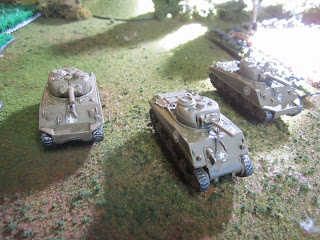 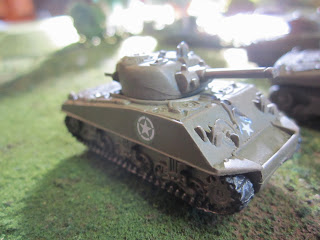 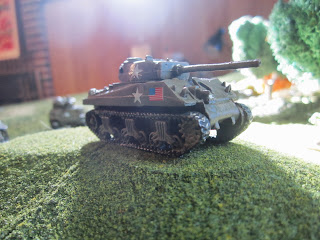 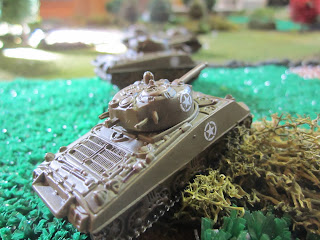 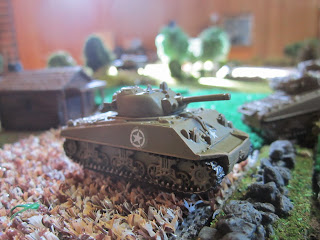 Posted by Disgruntled Fusilier at 10:53 AM 7 comments:

I was going to split this post into 2 posts but frankly it's not that interesting...

Thanks Ken for the great idea to use wooden sabots (say-bo) for my forest stands.  This is cleaner than felt on a gaming table that's flocked and it looks nice in my opinion.

I purchased these large circles at a local craft store, spray painted them, sprinkled sand on while wet, spray painted again and waited until they dried.  Then I dry brushed them a tan-earth color, glued some static grass down, and then glued some on some trees. 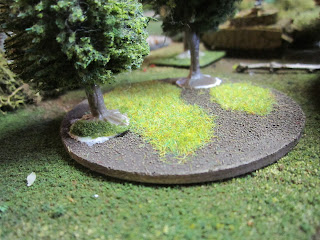 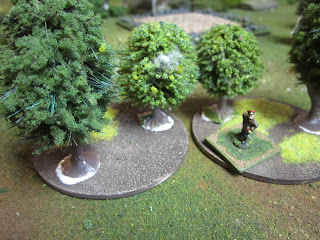 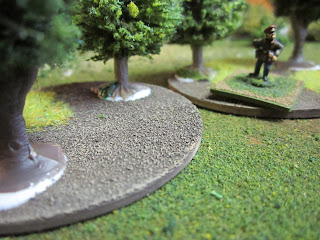 And now to the fun part.  The World War II Project!  I am starting to enjoy flames of war if only for its simplicity of play.  I am not constantly looking up things and the procedures are fairly straightforward.

So here's the deal - all of my 15mm World War II stuff is based for squad and platoon level games (Crossfire, GHQ, BKC, etc) where a stand is a squad or platoon.  That's not a show stopper for FoW - I just have to create some more stands which is a win-win as it gives me more forces for those other games anyways.  Today I painted up some mid-war German tanks with their basecoat and repainted ALL my US Army vehicles and will be painting up a boatload more Russians along with mucho transport to carry them.  Should give me a nice rounded and flexible force for Flames of War also, if I wanted to use an infantry company or tank company, I'll have either to choose from.

I have been reading the starter rules for Open Fire, the Flames of War game I received last Christmas.  Tonight I broke out some of my miniatures that were painted and threw them on the table to try out FoW.

It was fun but there was something missing.  I can't quite put my finger on what's missing.  Maybe while I'm writing this blog post, I'll figure it out?  Onto the action.

I played a quick tank on tank game and a quick infantry on infantry game.  I'll admit a few things here - the infantry action is alot of fun because there are literally buckets of dice thrown.  1 per Rate of Fire of each team with HMGs getting 6 dice!  So I'm throwing 12 to 16 dice per fire step, just for one large infantry platoon.  awesome!  how can I miss!?!?! 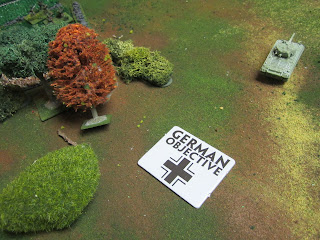 The American Shermans move out towards their objective and immediately come under fire from the Tiger and Stug IIIs.  Not good.  First hit causes a "bail out" and the rest of the Shermans head for cover. 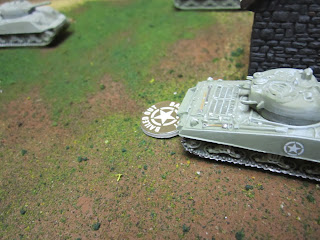 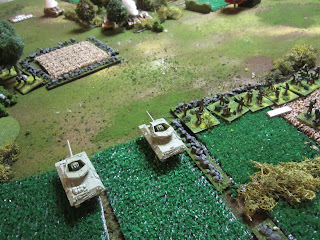 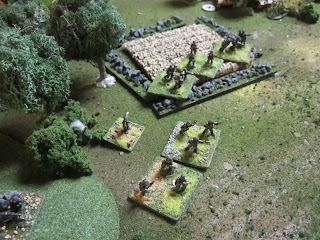 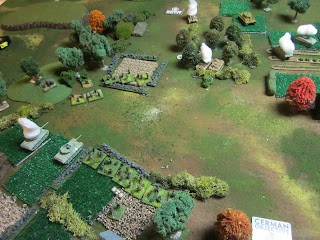 Eventually the Germans make it to the American positions and get in close and initiate an assault, only to be beaten back by heavy American fire and pinned down.  Assault is over, although it's too late as German amor pours into the objective, winning the game for Gerry.

A cracking good time although I'm not sure if FoW is the game for me, I will not rule it out.  I like the system, the buckets of dice, the light hearted way the rule book lays out combat, and the combat model itself.  Overall rating?  Steve will play again, either with people or solo, but it doesn't beat BKC in my humble opinion...

Email ThisBlogThis!Share to TwitterShare to FacebookShare to Pinterest
Labels: Flames of War

That's more like it!  I playtested Freeman's Farm once more prior to "going live" and hosting it as a game.  Some of the adjustments I mentioned in my last post were great - this time the reinforcement schedule worked, the terrain was more conducive to breaking the battle down into smaller engagements, and the better firepower and discipline of the British were offset by sheer numbers of Continentals and militia.

While this was a narrow American victory, the ultimate outcome hung in the balance throughout the game.  Division exhaustion really killed this battle though, as I think the Brits would have won if the center division hadn't reached exhaustion and broke with an unlucky die roll.  "Oh fatal ambition!" (last words of General Fraser)

A great tactic I learned with Wing Scale as opposed to regular Volley & Bayonet is keeping skirmishers around Artillery to protect it.  You get to roll counterattacks when you're attacked so this is a great thing to have a cloud of shooters around your most powerful weapon.

Another great tactic is the use of cover.  Woods enable saving throws from fire as do works and maybe some stone walls. 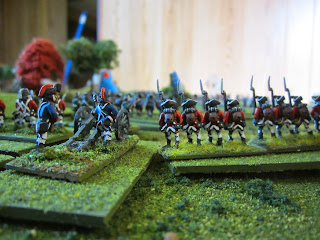 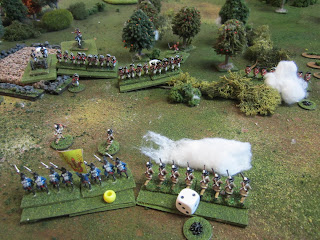 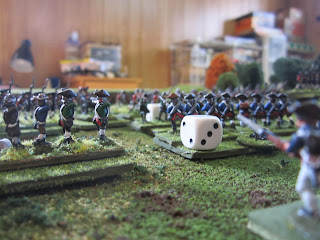 The arrival of the German units under Von Riedesel were a result of a die roll for when they would arrive.  I got turn 4 and it seems all of the really important stuff happened on turn 4 anyways.  Morgan's unit and teh Artillery in the center disappeared, Poor and Fraser began their fight in earnest and Fraser administered the King's justice via bayonet.  (which devastated Poor's Brigade, unlike in the real battle where the British assaults were beaten back)

At this point, Poor's Brigade broke and fled.  The next turn the British left wing broke after a sustained and very successful volley from Learned's Brigade who was fresh.  The game ended with the British center collapsing.

All in all, a great game.  My only recommendation prior to hosting this game is to track casualties on paper rather than "in my head."  Wing scale is terrific and gives a great feel where lines of sight and visibility become more important.  (musket long range is 8" as opposed to the standard game where units of this period must be touching to engage).  Combat is much more sustained and longer lasting unlike "real" Volley & Bayonet.  I will continue to play wing scale V&B for future AWI games, although for my SYW and possibly Napoleonics, I'll stick with the standard rules.  huzzah!