Sorry for my lacking terrain but otherwise had an enjoyable game fighting over a pass with dug-in American troops facing off against a German assault gun company, panzer III light company, and a veteran infantry company on foot.  THis was also the first time I used my Sdfz 251/9 halftrack in a support role and it did not disappoint!

This game could have gone either way.  I diced for forces too and I'm not going to lie, I rolled 2 German Armor companies and that had me worried.  How was I going to assault dug in US infantry with not much infantry support of my own? 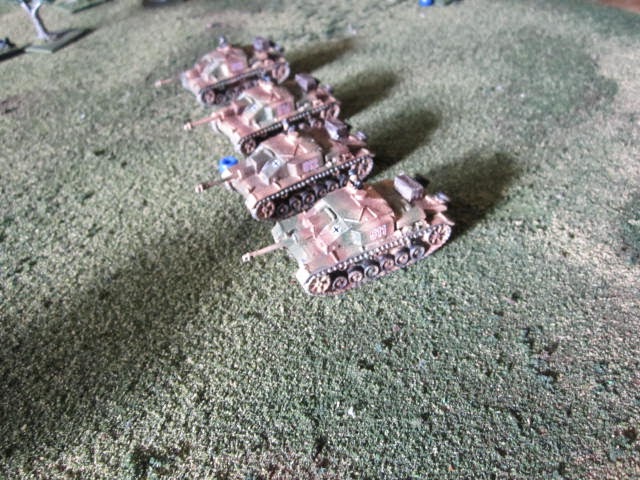 I moved the German light armor through a mountain pass, only to have them ambushed by US tank destroyers.  The TD's didn't disappoint, knocking out the first tank they came in contact with.  Unfortunately, shrewed use of the initiative ensured the remaining German armor eventually KO'd both of the tank destroyers, opening the US right flank up.  Not a good position for the defender! 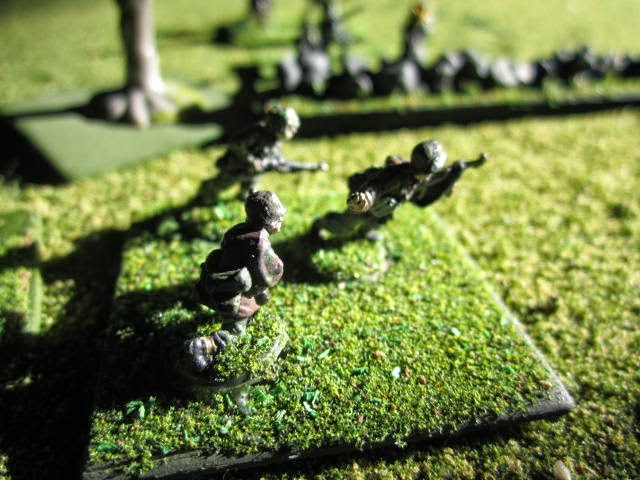 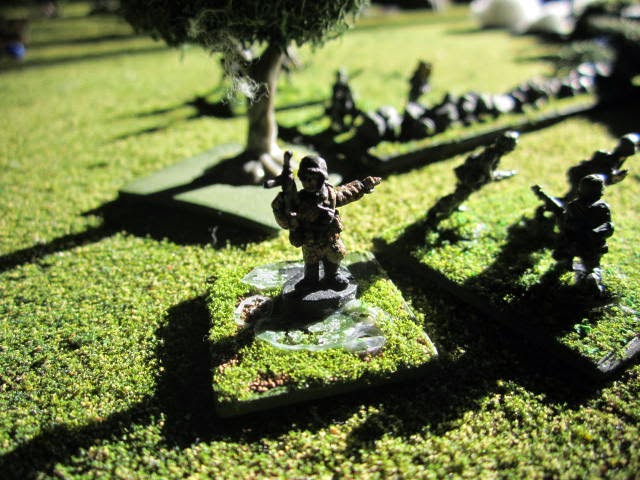 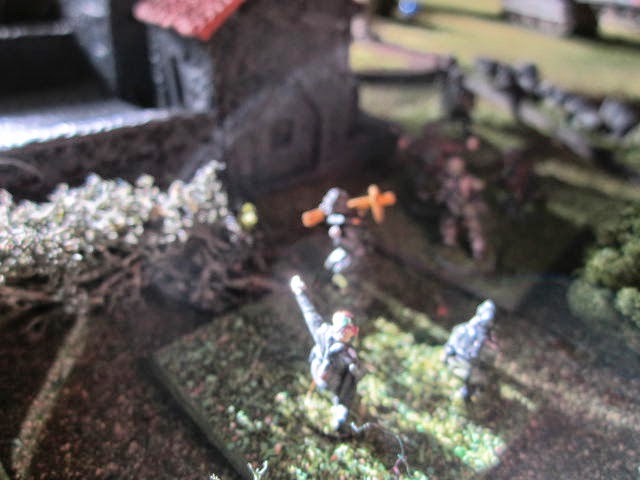 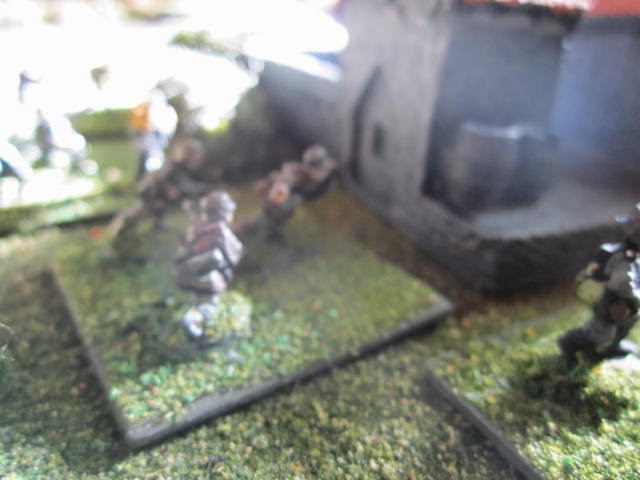 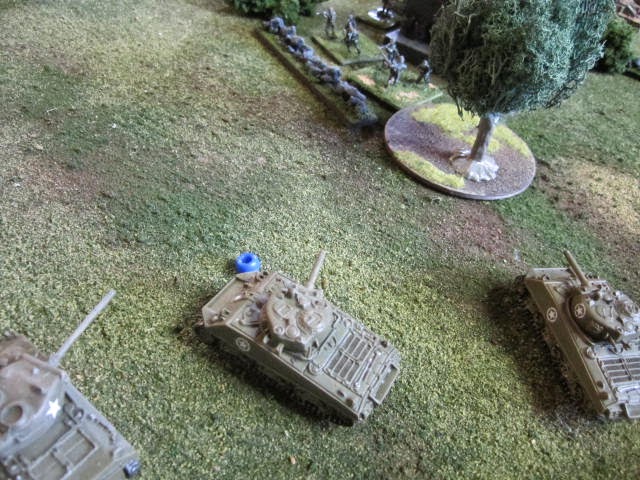 By now, German light armor is threatening the US rear, forcing them to divert units from the line to redeploy and deal with the German tanks.  The assault guns are assisting the infantry by creeping up with them.  they trade shots with the American armor losing some sections but still passing their morale. 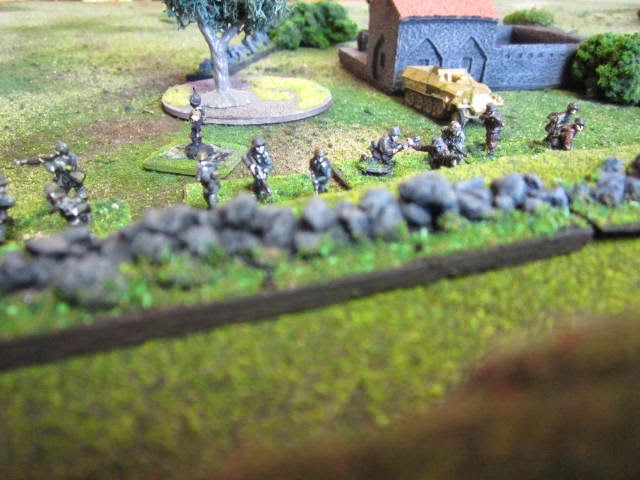 this was a good game.  The US player eventually lost his overall force morale check due to the elimination of 2 / 3 of his combat teams.  The German player never lost an entire team for the whole game and i think I know the reason for this.  The Germans made good use of Artillery and suppressive fire during their assaults.  Their assaults were determined and slow.  The fact that the US player couldnt get his artillery to arrive, and could not get his tank company on the move faster probably didn't hurt.  This was one battle where the US player, the Allied player, actually had better tanks but unfortunately they couldn't activate or actually get to use them so the German player, "got there fastest with the mostest."

For my next WW2 scenario, I'd like to play some battles from the Panzerblitz and Panzerleader scenario boxes.  Hopefully I can get my desert board finished but that is a long way off.

I may take some time off from WW2 and Modern battles projects to focus on some other projects I'd like to play, like my AWI-black powder conversion project, Axis and Allies Naval / Victory at Sea projects, WW2 air to air, and perhaps even Epic Space Marine and 15mm Ancients.  These are all projects that have been sitting on the back-burner for a long time while I forged ahead with my 15mm WW2 stuff.
Posted by Disgruntled Fusilier at 11:06 AM 2 comments:

I played half of my first "Rank & File" game today.  Rank & File is a Horse & Musket rules set from Mark Sims and covers the entire Horse and Musket period from about 1700 through 1900.

I have purchased a number of rules from Mr Sims now, and all I can say is that I am very impressed.  There is a tremendous amount of thought into where the different periods fall in the rules (rally, morale phase, charge phase, etc).  At first glance, it doesn't look like it makes any sense but when you sit down and play the game, everything comes together nicely.  I give Rank & File 5 out of 5 stars, and give it the highest compliment I can think of for a wargaming rules-set:

If I was going to design a rules set myself, this is exactly how I would design them.

Rank & File boasts that it can handle any level of Horse & Musket warfare, from tactical through operational, with players choosing a troop scale to match their tastes.  Most units will break down to 6 stands.  Stands are removed after a certain number of casualties, with a unit becoming non-mission capable after it is reduced 50%.
I played a scenario from Charles Grant's "Programmed Wargame Scenarios" where a large Brigade or small Division must break through a gap dominated by a ridge-line.  In this instance I moved the Ridgeline forward but it forced the Rebs to bottle themselves up. 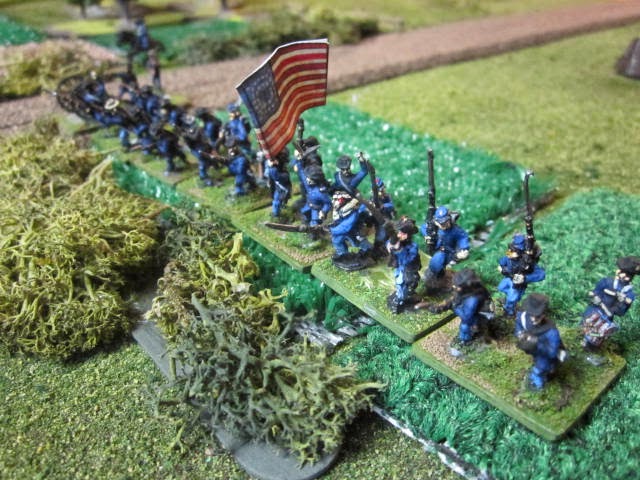 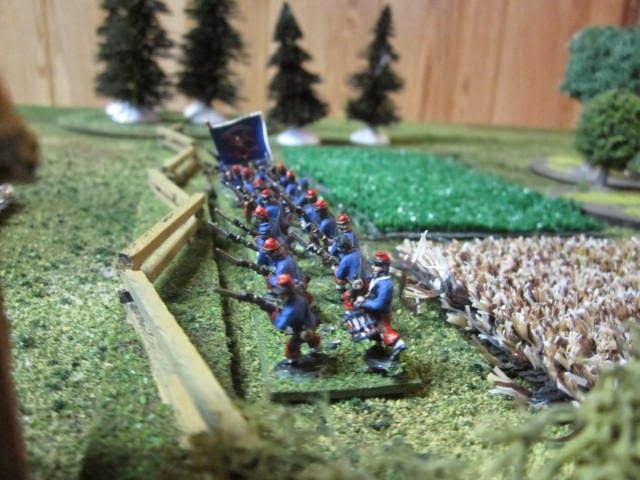 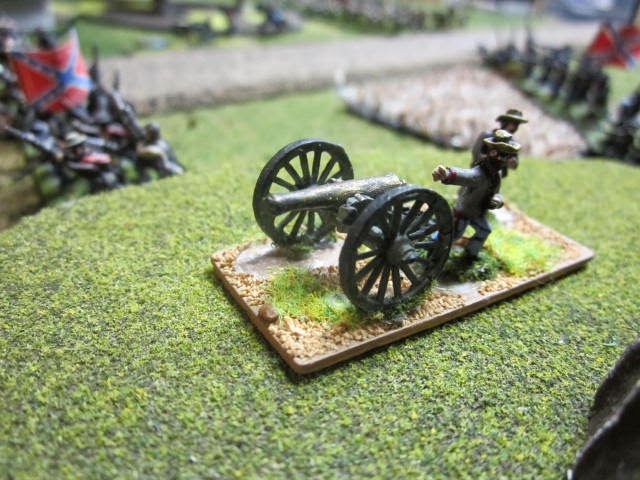 The Rebs push forward under shot and shell from the Yankee units.  The Rebel Artillery needed to move out well in front of the advancing troops if they were to provide good covering fire.


So this first half of the game ends with the firefight claiming a Union stand, and their commanding General, who was attempting to keep his boys' morale in check.  The rebels are about to charge in the beginning of the next turn, having reduced the Zuoave Regiment but 1 stand.  It will end up being a Brigade attack with 2 Regiments coming on if they have the movement for it.

I have so far read Mark Sims' excellent "Rate of Fire" skirmish rules, which I also purchased, and his fantasy set "Legions of Battle" and if any of them are as fast moving, simple, and enjoyable as "Rate of Fire" then I will be content playing mostly these rules in my spare time, when I'm feeling like a skirmish game, mass fantasy battle, or a Horse & Musket game.

Finishing up my US covering force.  All that's needed now are the M551 Sheridans and more US infantry stands and I should be able to fight a "proper" battle. 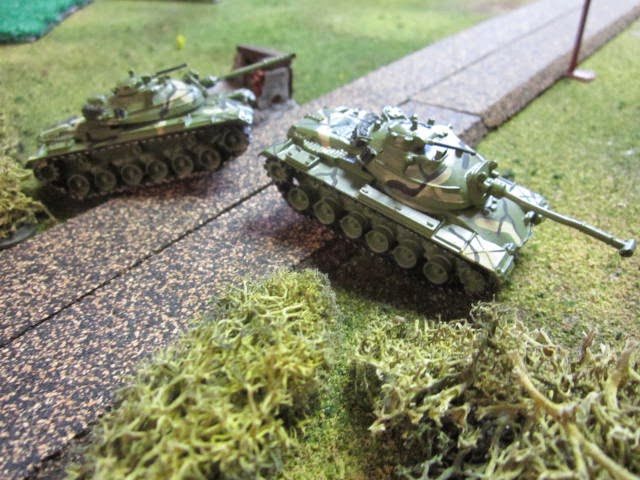 These units will make up an Armor platoon for my US force that will go with an infantry platoon and an M551 Sheridan platoon to make an ad-hoc Cavalry troop for the mid to late seventies.  I can always have them pull double duty as Bundeswehr Panzers even if the colors are wrong. 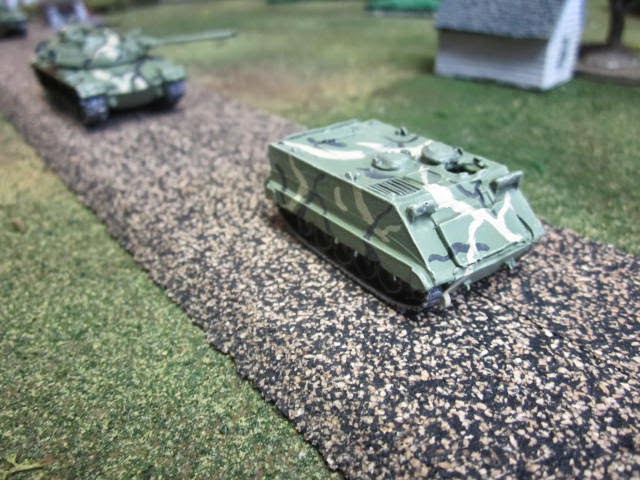 The M113s are easy.  I have the Battlefront M113s from their Vietnam range and am really looking forward to assembling them.  I will paint them in the standard NATO 3 color camo to match the sleek M1's I already have semi-painted.  They will also go with the Bradley IFVs as well and would do fine in a "Team Yankee" situation when I have the Cavalry pulling back, and Team Yankee taking up overwatch positions over that German village. 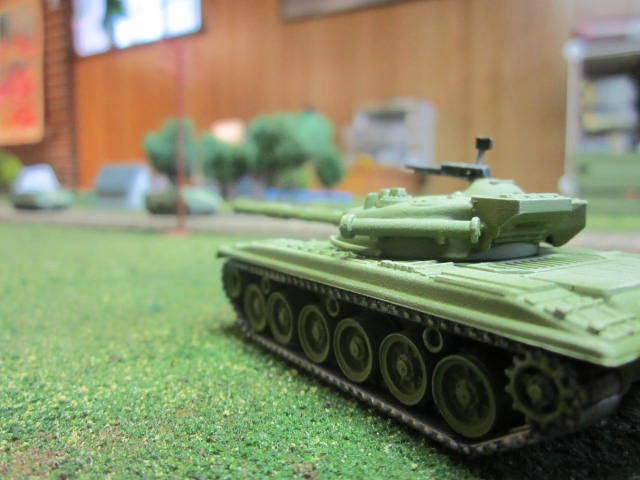 Thanks, MARFAC, for asking an important question - if you have dared to download Combat Team! and have a suggestion, question, comment, or maybe even an AAR, you may direct it here:

The group page will soon be the "official" home of Combat Team!  Right now, the rules and unit stats currently reside on my blog, but eventually, when I have a cleaned up version of the rules, I will post them to the Google Group.

Feel free to stop by and have a look.
Posted by Disgruntled Fusilier at 11:04 AM 3 comments:

Made a ton of progress with my "weekend" over the last day and a half.  I spent most of the time converting old French Grenadiers and re-painting and rebasing them.  Between the Napoleonic madness, I was able to basecoat a ton of 15mm Armor for my upcoming modern games when WWIII breaks out in Central Europe.

Here is my first MERDC M113.  Part of the old US Army "J" Series MTOE, this will serve as a M114 scout vehicle in a small Cavalry Troop, or a covering force with some M551 Sheridans (drat I spoiled the surprise!).  I am also painting up 2 M-48s from Command Decision that will serve along side this little bugger.  He is based in Army Painter "Army Green" primer and this is a sandstone and black over for detail.  My more modern US stuff will be painted in the NATO standard 3-Color. 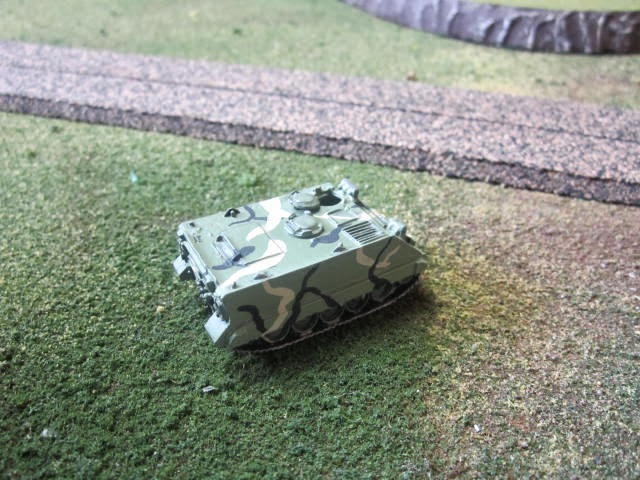 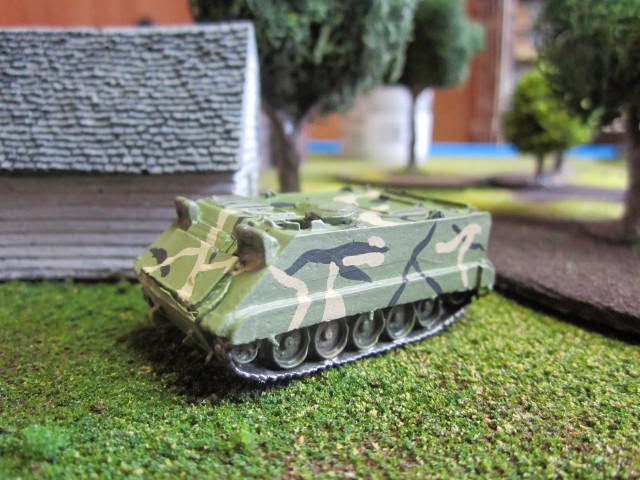 Okay here is some of the Petner Panzers basecoated with the AMAZING Krylon "light olive" camo paint.  Good luck finding this in a "big box" store.  I had to go on Amazon to order it.  Having seen Russian export equipment first-hand in Iraq, I can tell you this green light-drab is absolutely spot-on the Warsaw Pact export colors.  (if you're watching the news and lucky enough to see the Ukrainian T-64 that's "dug in" with some pine boughs covering it, you'll notice this paint I used is a dead-ringer for that tank's color).  So my Soviet "regular" forces will be painted in this single-tone color.  They will also serve as Cat II troops such as Poles or East Germans if the need arises.
No details yet on the Soviet stuff.  I am too burned out from painting Naps today! 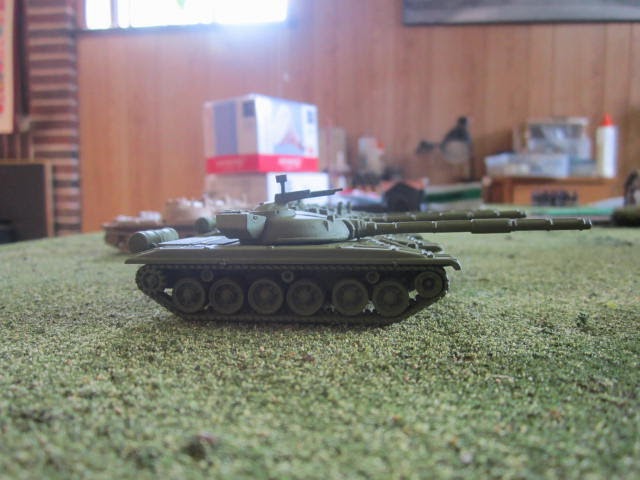 Okay last but not least, I promised progress and progress you will see.  This is my second-last French unit before I am officially DONE painting French infantry units.  And then I can finish the last of my Brits.  Then start my Saxons, and Napoleonic Prussians....Ugh!!! 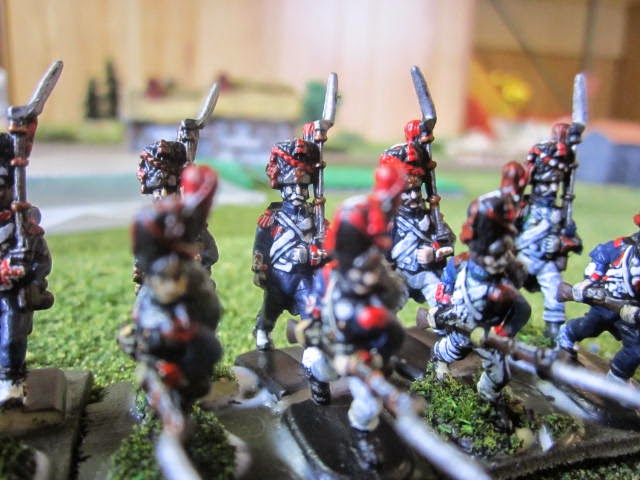 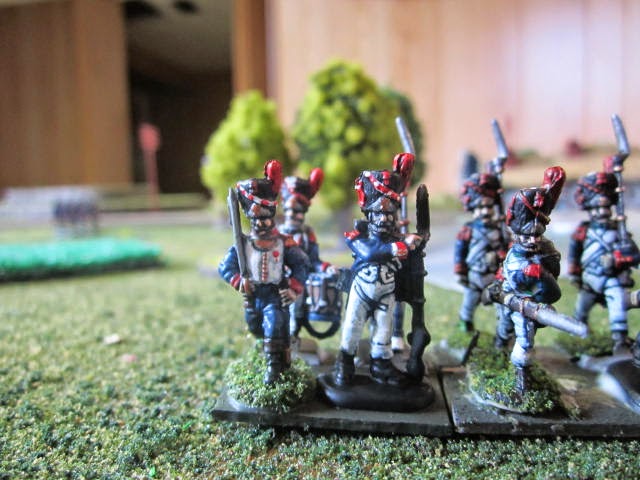 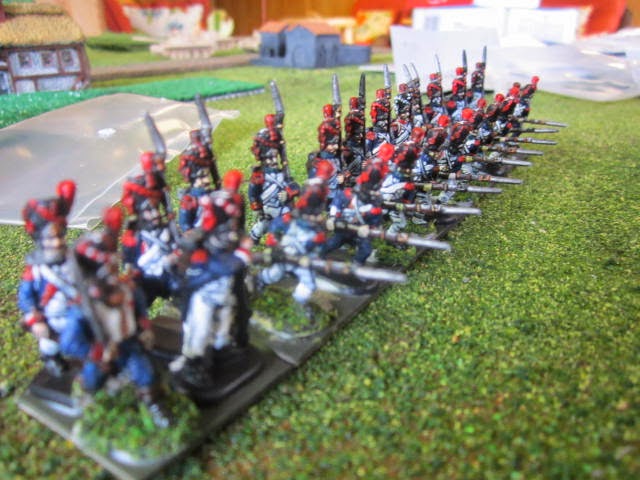 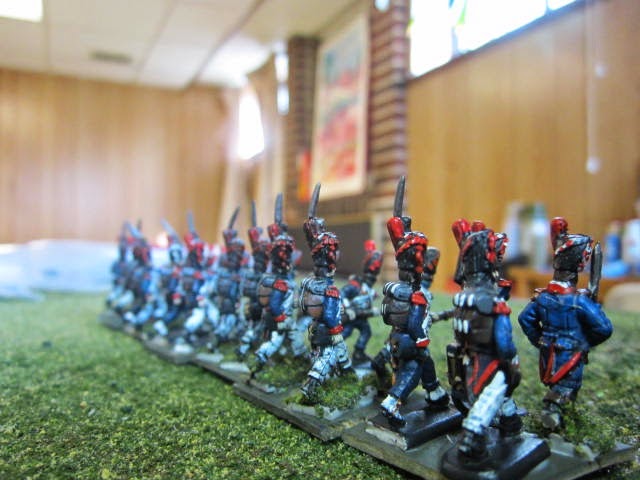 Speaking of Prussians....I have some intel for all you Seven Years War gamers and collectors.  If you're into plastic, I'm happy to report that the HaT Seven Years War plastic 1/72 guys come with head options!!!!!!!!!  Want Fusiliers?  You can affix the Fusilier hat.  Want Grenadiers?  You can affix the Grenadier hat.  This is a pretty significant development because it considerably expands the options for building an Army in plastic and not stretching the ole' wallet too much.  I am embracing the HaT Seven Years War troops and will be building Armies from them once i get a handle on the Napoleonics situation.


And here's a little surprise for you Horse and Musket fans...Zvezda Swedes from the Great Northern War.  I am very tempted to have them stand-in for extra manpower on the SYW table.  From a distance they look...Ok?  Anybody's thoughts? 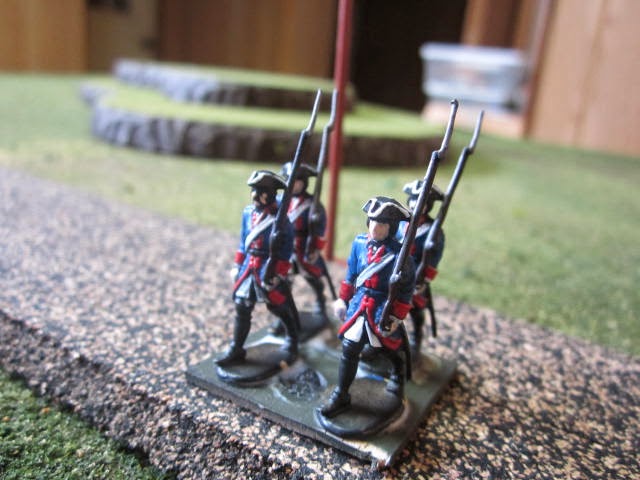 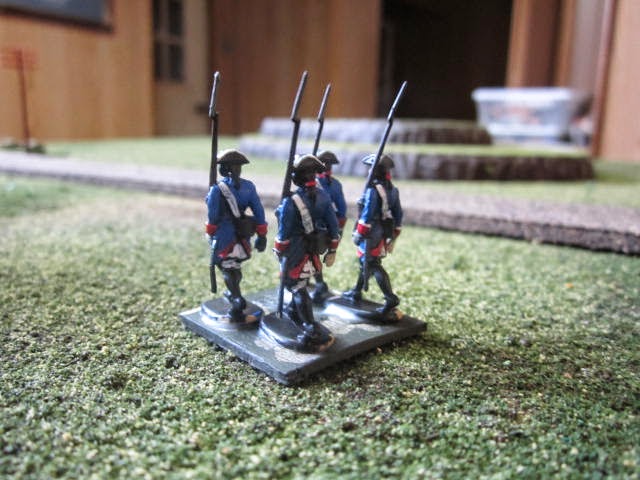 Not shown here are my M48s, my Israeli halftracks, Arab T-55 and T-62 hordes, Soviet infantry and a myriad of other systems that were painted up.  Pictures of them coming soon!