Heavily laden, the men marched out into the early morning gloom on the moor.  The dampness seeped into their bones, the mud sucked at their boots and made their load feel that much worse.  They were finally across the battlefield from their quarry - a large force of black orcs from the eastern forests of the Reik had been pillaging villages, killing locals, and destroying almost everything in their path.  The closest garrison - the fortress at Rattenkrieg was called out to meet these raiders and defeat them.  Lord Rattenkrieg, riding at the head of a thousand men, had assembled a force of crack troops from his infantry regiments.  The Regiments, one of sword, of halberd, of crossbow, handgun, and another of sword, marched out in pursuit of the orcs, only to meet them in the upper dachs.  It was there they were massacred almost to the man.  Lord Rattenkrieg had given his journal to the man Heinrich and it was there we learned of Rattenkrieg's demise.  A lesson in tactics that the empire can scarcely afford to relearn....

Doubtless by now you've looked at the pictures of Rattenkrieg's disaster and are wondering "where are the Orcs now?" By last account, wandering around the eastern forests foraging.  By Sigmar, this is only the begining!  The Orc flushed with victory becomes drugged by his power and seeks only the pleasures of battle.  They will come again with greater force and fury than before.

This was my first game of Warmster.  Believe it or not, I've played a few games of Blitzkrieg Commander and Cold War Commander and those games had given me some bad habits but the lessons  I learned watching Rattenkrieg's lines being torn apart resonate.

Warmaster is a fun but unforgiving game and with all of the dice flying around, you'll find that fortunes in battle can change quickly.  Take for instance an unforseen Empire victory during the last Orc charge.  The Melee was won but the pursuit was a disaster as the Orcs rallied and won the second round, virtually eliminating the Empire Swordsmen.  That coupled with a massive Orc breakthrough against the Crossbowmen equaled a disaster for the Empire.  Rattenkrieg, it was rumored, drove his horse into a pack of marauding Orc to buy the few wounded time to escape.  It was in vain.  The last thing Rattenkrieg saw was his troops being eaten by dreadful 4 legged beasts, before they burned out his eyes and decapitated him.

Protect Missile Troops: Crossbowmen have no armor and very poor fighting ability - especially against black orcs.  They should always be behind a line of Halberds or Swordsmen (I give Swordsmen and Halberdiers the same values as I have alot of Swordsmen figures!) Crossbowmen and Archers to the rear!

Always Always Always have Supported Infantry if you expect contact!: If there is significant melee combat expected, it is wise to double up your ranks as best you can.  The +1 in melee certainly helps and can tip the balance!


Advance on a broad front:  Advancing conservatively with infantry on a broad front enables mutual support from your missile troops as well as flank formations.  My fine halberdiers (the nicest painted troops on the table!) were gobbled up by the Orcs in 2 rounds of combat because of a command blunder that caused them to charge.  Had we advanced a little more cautiously, they would never have made the charge as they would have been too far away.

The next battle will find Empire reinforcements from the various states of the Reik.  It will also find more Orc regiments, Goblins, Goblin Lizard Riders, rock lobbers, and artillery!  Depending on who wins that fight, there may be an epic battle fought for control Festung Rattenkrieg.
Posted by Disgruntled Fusilier at 4:33 PM No comments:

Email ThisBlogThis!Share to TwitterShare to FacebookShare to Pinterest
Labels: Warmaster

Played my first game of "Warmaster on the Cheap" today with my 20mm Caesar, Zvezda, and Orion troops today.  An incursion of Black Orcs into Empire territory sees the Garrison under Lord Rattenkrieg sent out from "Dachsland" to defeat the Orc horde... 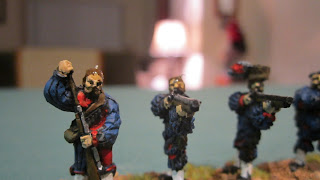 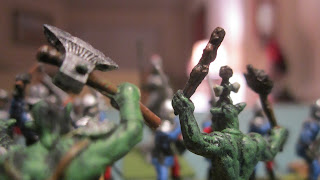 Posted by Disgruntled Fusilier at 12:57 AM 4 comments: