Battle for the LZ! Part II

Played the second half of my LZ Over-run game this time switching up the rules and playing the excellent "Cold War Commander" rules for the second half of the battle.  I have to admit, I like the way CWC handles infantry combat better than most games.  Giving infantry 6 hits but no save gives them tremendous staying power in a fight but doesn't bog the game down.

Cold War Commander is a little different and breaks down combat more than FFT3.  Most of your combat situations in FFT3 are completed in 1 turn whereas in CWC, you get the opportunity to regroup and have another go at the objective.  This style of combat (gameplay) suits the NVA player just fine, as multiple and repeated assaults are the key to victory!
Artillery is devastating as it should be, and doesn't discriminate between friendly and enemy.  My US forces suffered losses at the hands of their own gunners.   Having weapons teams in support is great for close combat when you could use the additional modifiers.  I was stunned at how quick and brutal the assaults are.  You get +1 for supporting units, + 1 assault bonus for being the attacker, and the enemy gets -1 for being flanked or suppressed.


What I like the most about CWC are the reversals of fortune, and the ability to recover from a blow received on a previous turn.  Many rules sets are not so forgiving. 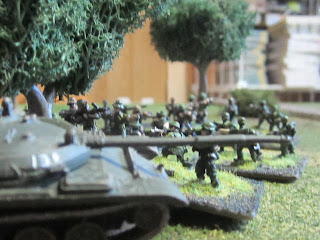 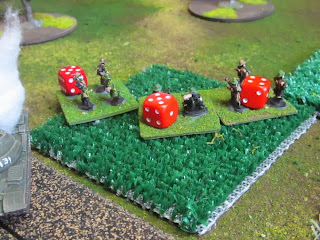 LESSONS LEARNED:
Since I post these for many of my games, I thought this would be an appropriate time to post since this was a new style of game I haven't played yet.  If you find yourself playing in a Vietnam battle, here are some things to consider:

Final Protective Fires: Not sure what other Armies call it, but in the US Army, FPF are a final wall of steel between you and the enemy.  This blocks the enemy from advancing on your position and is a life saver when you're outnumbered 3:1 locally.  In both cases of rules, both FFT3 and CWC, FPF worked exactly as they should, although CWC had a much bigger fire radius.

Aggressive Infantry Tactics:  Boy if that doesn't sound like common sense after looking an an infantryman's resume and job description.  One of the best moves in the game was sending an additional US company over to the woods to clear out those NVA troops before they could mass again.  Spoiling attacks are ok too.  If you have a good opportunity to flank the enemy or to launch a counter-attack - do it and don't wait for the third wave to finish you off.

Working with Helicopters:  With the dawn of "modern" gaming (late 20th century) as its own bona-fide wargaming genre, you should get used to the joys and heartbreaks of working with rotary wing tactical aviation.  There are alot of different avenues to explore here and not just for CWC or FFT3.  Helos add a true third dimension to the battlefield, enabling you to spot and call in artillery fire on the enemy's reinforcements before they've even reached the forward edge of the battle area.  Transport ships can drop your infantry mostly where you'd like them to be dropped, and gunships can be used as airborne artillery or aerial tanks - just dont forget that their skin can literally be punctured with a screw-driver so a bullet could really cause trouble inside one...  Case in point was the first battle when the NVA ZPU shot down my Huey-Hog.  (too bad because I was going to use the rockets the following turn...).  Always be cognizant of the enemy situation and keep your helos moving.

Great game.  I think CWC was probably more fun than FFT3 for straight-up infantry engagements.  The action flows a little faster and in CWC the infantry are still a potent force to be reckoned with.  I am looking forward to playing more CWC-Vietnam and will hopefully get to play around with some deliberate NVA attacks in the future.

Posted by Disgruntled Fusilier at 10:27 AM 6 comments:

I played a 15mm Vietnam game today and, quite unusually, I used the Fistful of TOWS 3 rules for the infantry battle.  Think of the famous LZ "X-Ray" battle although this one started quite differently, the results (so far) are largely the same.

The scenario is largely the same.  The US Forces conduct an air-assault for a subsequent movement-to-contact and end up making contact quite literally on the Landing Zone (henceforth referred to as an LZ).  The US forces have roughly an Air Assault infantry battalion with a platoon of UH-1B Huey Hogs, 2 batteries of 105mm guns and of course 81mm battalion mortars on the LZ with the "sky soldiers." 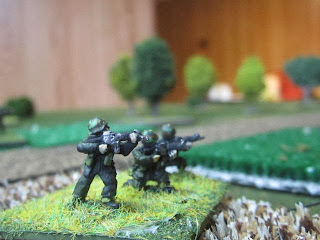 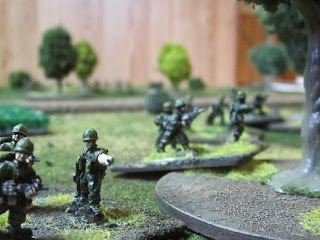 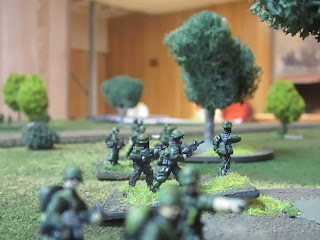 Battle started out slowly as I rolled for the arrival of the NVA troops.  Each battalion arrived on its own good time and this allowed the US to maximize its fires (including the first of 2 airstrikes from an A-4).  The firepower is keeping the NVA suppressed in front of A Company on the Northwest side of the LZ.  The US loses its heavy weapons teams with A Company to NVA small arms but so far they're holding.  It's not the jail-break I thought it would be. 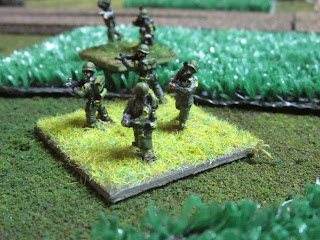 And that's it for today's fight.  The US infantry have so far managed to hold the NVA at bay in each engagement so a shift in tactics may be necessary.  Without the gunship on the LZ anymore, it might be a little easier.  The US Artillery isn't making it any easier either as suppressed stands lose half their movement.  There are 2 NVA battalions left out there to try and sweep over the LZ.  One will attack from the southwest and one will attack from the northeast (thus all 4 corners of the table are covered!)

Tune in tomorrow as we post the conclusion of the battle!
Posted by Disgruntled Fusilier at 3:49 PM 5 comments:

If you were to ask me how much I gamed, painted and blogged this year I’d more often than not tell you “not enough.”  New Years resolutions are cliché and “hoping” for a good year isn’t my style so I thought a well thought out blog post on the State of the Hobby for this year was a good way to put thoughts to electrons (formerly pen to paper...).    I have broken what I feel is a good compartmentalization of my hobby into a few key categories:


Painting: I painted a ton of miniatures this year, although not much to show for it sadly.  Probably one of my biggest faults is moving onto other projects before finishing one.  The big numbers are 336 total figures, to include troops, vehicles and some scenery for 2013.  Not bad – but just imagine if 336 was a single genre like Napoleonics or SYW, or even WWII for that matter.  I’d be “mission complete” for a project.  Big plans for 2014 – the World War II project continues with some old projects coming back to light as well as hopes for finishing some 15mm units you all haven’t seen yet like Brit Paras, German SS and MODERN 15s like US, Soviet, Israeli, and “client states.”


Army Creation: This has to be the most successful of all my wargaming endeavors this year.  For starters there were entirely new units created to field Flames of War units, which as everyone knows has an insatiable thirst for vehicles, prime movers and infantrymen.  This year, Soviet Battalions were formed and finished as well as German heavy and Grenadier Kompanies.  Same with my Shako and ACW Horse and Musket 15mm armies.  Not bad for taking a 3 or 4 month hiatus while we moved into our house.


Procurement: Classified.  Not even my wife (household-six) knows the full amount diverted towards miniature military expenditures.


Gaming: I didn’t game nearly as much as I would have liked to.  Ideally, there is a game per week playing different genres ranging from skirmish to full-fledged Napoleonic battles.  That’s something to shoot for in 2014 where the gaming room is now well-established and I have large projects underway.


Research & Development: I haven’t the foggiest clue about how much time I’ve wasted day dreaming about creating my micro armor rules and then trying them out and failing miserably (I should really let someone else determine if I’ve failed or not...).  I’ve also been very successful at Terrain R&D creating cost-saving alternatives to some of wargaming’s most expensive aspects – terrain.  My tree stands are looking good and the cork road-bed was a life saver for my gaming board as felt proved too sticky for the surface and snagged the roads each time.  I also was able to successfully “scratch-build” a line of “corporation troopers” for 20mm science fiction gaming.
Posted by Disgruntled Fusilier at 11:17 AM 4 comments:

Email ThisBlogThis!Share to TwitterShare to FacebookShare to Pinterest
Labels: 2013, New Year's Resolutions, State of the Hobby

Merry Christmas Everyone!
Last night I got home from work and immediately set up a "Hold the Line" scenario from the FoW rulebook.  I introduced a-lot of concepts from the rules that I had not previously played like minefields, and ambush, as well as reserves, artillery and airpower.  So this game was a really interesting one.

Game took place on the Ostfront I would say in 43.  Germans have the upgunned Panzer IIIs and a small Tiger platoon along with some other accessories and the Russians have....you guessed it!  Shedloads of tanks!


This game was an intense nail-biter with the Russians getting new "stuff" pretty much every turn.  Their artillery was devastating too.  Even in bombardments, 122mm is awful and managed to knock out a Tiger tank, and a few halftracks as well as half of my infantry.

The plan was to smoke the crossing then cross the minefield and assault the infantry.  Luckily for me, the infantry skedaddled off the battlefield and the crossing was almost unimpeded except for the Russian artillery at the road and the awful mines.  (by the way, the mines also took out a tiger, and numerous Panzer IIIs).  The Russians broke first by way of company (battalion) morale but just barely.  Unfortunately for the Kommissar, there was no one else left to execute as the Company broke!  (by the way, that rule did save the day once during the game for Ivan).  Speaking of bad rolls for Ivan, each turn Russian's managed to roll 1 flight of aircraft and the Germans managed to roll fighter interception!  Until they both ran out of dice....

The Germans managed to take the objective with...the most un-sexy and ugly German vehicle of the game, my Marder III platoon.  Which, to Battlefronts' horror, were Axis and Allies Marders!!!  But they fit in nicely.

So that was my epic, huge Christmas-Eve Flames of War game.  What a meatgrinder!

Some lessons learned are pretty obvious - you should include recce in bigger games to detect ambushes early.  Also keep track of your assets.  My Stug III platoon went a few turns (camouflaged in the hedges!) without shooting for the simple reason that I forgot about them...

I hope everyone who celebrates Christmas has a wonderful one, and everyone else has a great day!

PS Sorry for the crappier than usual pictures - taken off my phone!
Posted by Disgruntled Fusilier at 7:39 AM 6 comments: