While technically the game is made for Chain of Command by Too Fat Lardies, there are instructions in the back for using other rules sets, including Flames of War.  I know, I know, not your cup of tea, but definitely the quickest and easiest possible rules to translate from the map to the table.  We used historical OOBs to represent elements of 4th Canadian Armored, and instead of using Fallschirmjaegers, we used Battle-hardened Grenadiers. 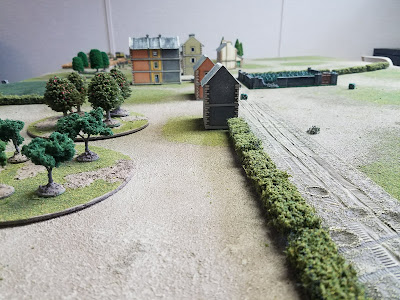 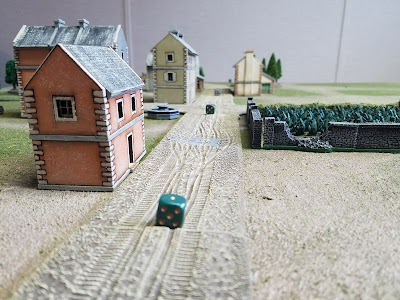 I used my Germans and Ken brought over his outstanding painted British.  We used 1750 points worth of stuff.  My Germans amounted to 2 x understrength Grenadier platoons along with company HQs, weapons platoon, AT platoon (PAK40) and mortar platoon.  There were Panzers also, consisting of 4 x Panzer IVH's and from Division, a Tiger I platoon of 3 x Tiger Is.

We played the "Dust Up" meeting engagement scenario. 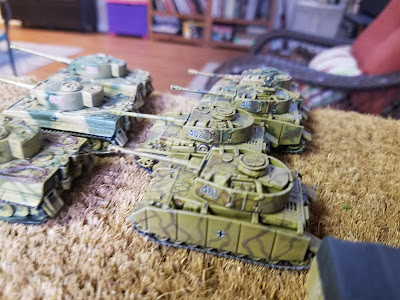 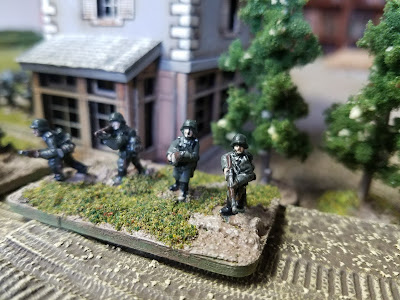 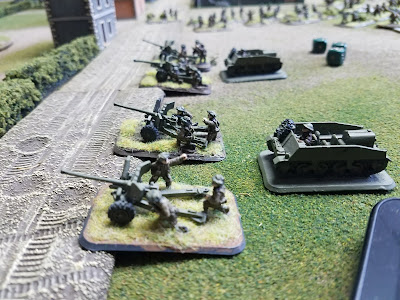 As the German CO, my plan is to use the 3 largest buildings in the village center as bulwarks in the defense, with a platoon holding down the "hotel" building on the right, a platoon holding down the farm house on the left, and in the center, with the best fields of fire, the HMGs covering the approach.  The British are going to be right up on top of me in no time and I will personally spot for the mortars while holding down the objective with the HQs section of the company.  The AT guns will cover the farm fields to the left where, reportedly, British armor will show up soon. 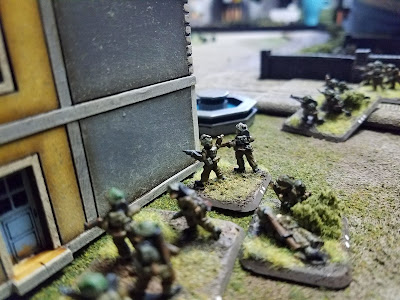 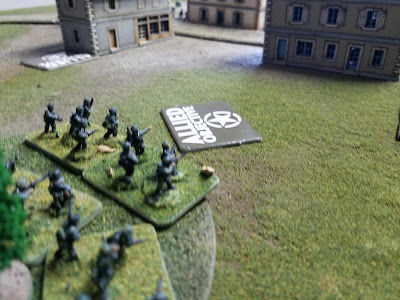 Ken moves pretty aggressively with his infantry and advances up to the center house where my HMGs have moved in on the top floor.  Close combat breaks out and while my sections are hurling grenades down the stairwell and firing SMGs and rifles, it's not enough and the firepower from the Canadians overwhelms them.  1 section is lost in room to room fighting and the other bugs out but miraculously passes their morale!  They stay in the fight! 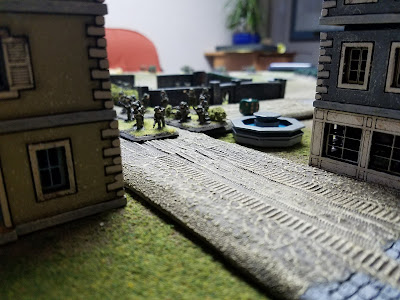 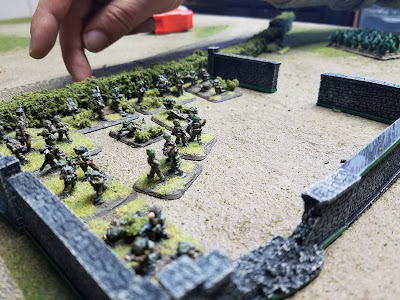 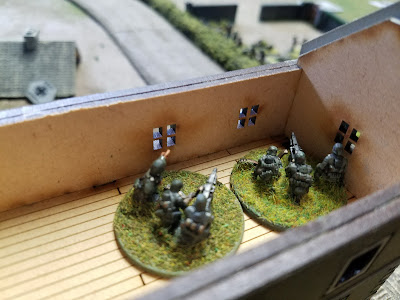 On turn 3 my PAK40's deploy awaiting the arrival of British armor - but a nasty surprise awaits as Ken deploys his Vickers HMG platoon.  24 dice if he's stationary.  He kills off my PAK40 platoon but destroying 1 section and forcing a morale check on the other.  I fail it and the crew runs off! 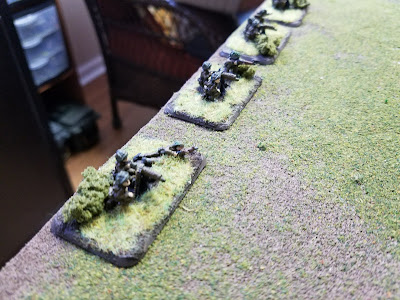 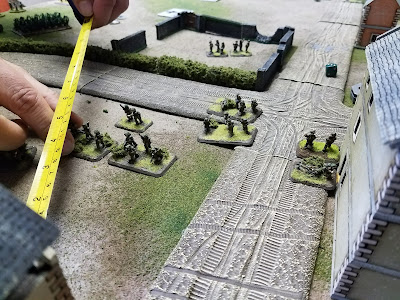 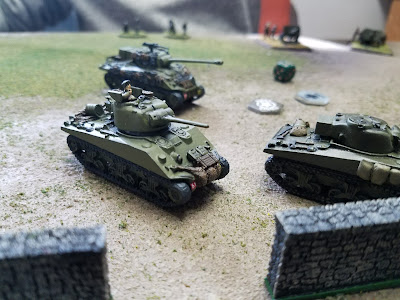 Heavy fighting breaks out at the farmhouse with the close combat lasting several rounds after the Germans counterattack and wipe out 2 x Canadian teams.  My teams in the upstairs portion of the house move down to engage the advancing Canadians.  Grenades are flying, SMGs, and E-Tools swinging like mad!  The combat eventually goes the Canadians' way and my platoon is annihilated! 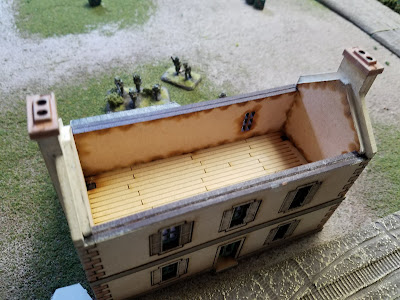 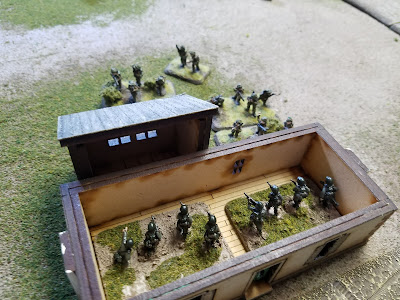 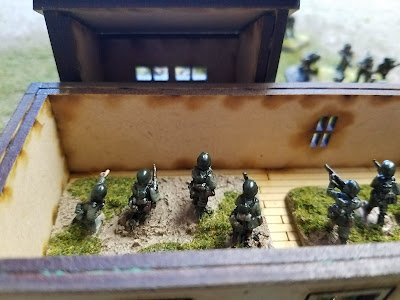 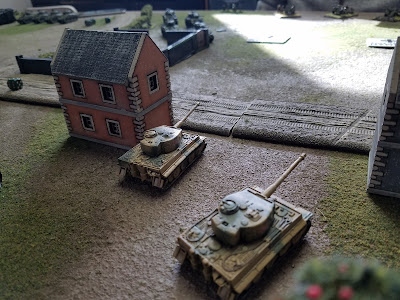 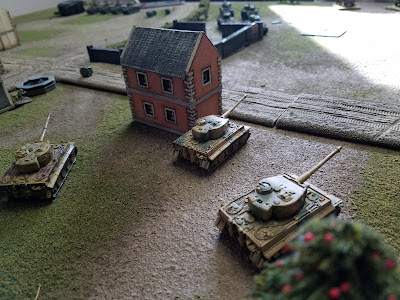 Ken's nearing the objective now and my Panzer IV platoon has not yet made it into the fight.  My Tigers are stuck threatening Ken's left but also holding down a Sherman platoon and the AT guns. 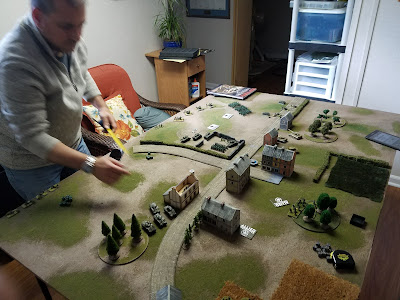 Ken moves up and assaults the objective which is being held by an HMG section and the Company HQs.  The CO cocks his Luger, primes his grenades, smartens the wrinkles out of his combat jacket and makes his way to the window to fight!  The Canadians fight their way into the house and destroy the HMG section and the command team.  If I can't get a platoon to close onto the objective, it's game over! 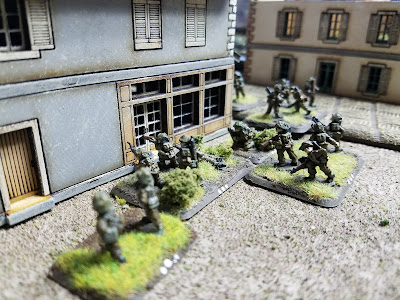 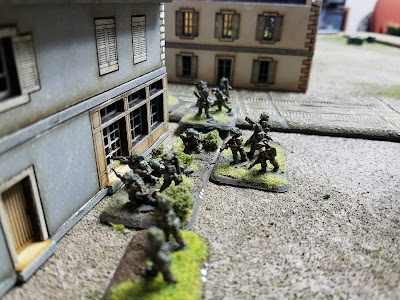 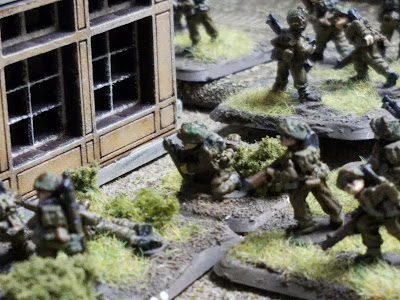 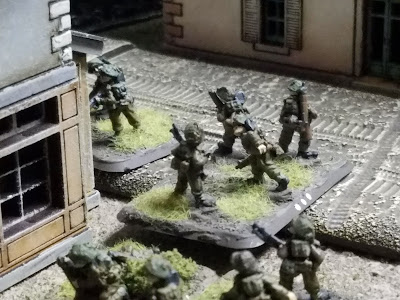 Ken fires a 6lb'r at my exposed Tiger and bails it!  This turn (Turn 7) is not looking good for the Germans! 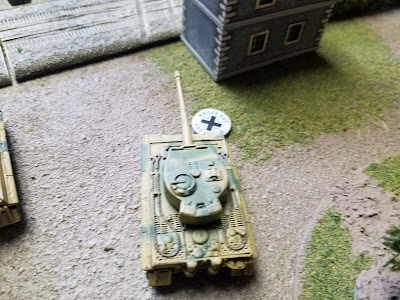 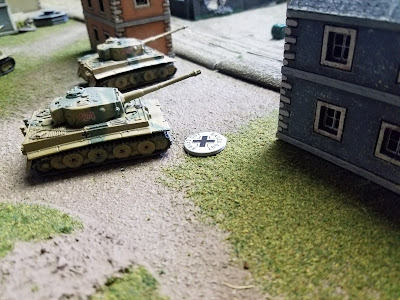 Bottom of turn 7, I move my infantry platoon out of the woods and onto the objective to contest it.  Also worth mentioning my Panzer IVs FINALLY arrive!  There is a big tank battle brewing also between the Sherman platoon which moved up to assist the infantry.  We're still in this fight!  At this point, it was almost 530 and Ken had to get going so we left the game set up.  To be fair, this is a very quick moving game but we had a bunch of rules questions about fighting in multi-story structures, indirect fire observing, and Rates of Fire to name a few.

THOUGHTS
Wow a really fun game so far and loads of tension.  Aggressive infantry tactics really pay off and I'm finding it's usually better to take a risk than to not take it in Flames of War.  Ken's handling of the attack into the town center was textbook and he systematically took down the houses, including the objective house.  There has been lots of built-up-area fighting so far in this game, with the houses attracting the infantry big-time.  Lots of artillery and mortars in use as well which I am thrilled over.  Most games, the question is decided before the infantry even come to grips - not so with this game so far.
I'm looking forward to finishing this game and to playing more in the campaign.

In other hobby news, I finally finished the Soviet Naval Infantry and Scouts so all of my "elite" Soviet units are done now, and it's onto the Germans.  Specifically, the Second Company, then the SS Company, and the Pioniere Company!

Also more action coming up with the "World War III Project" so stay tuned.  I hope everyone has a great week.
Posted by Disgruntled Fusilier at 9:45 PM