Alex and Dave were over Friday night for a historical Crossfire match-up straight from the "Hit the Dirt" Crossfire scenario book.  Last night we played the eastern front "Assault on Tula" scenario from the drive on Moscow in October, 1941.  This scenario featured a combined-arms assault by the famed "GrossDeutschland" Regiment against elements of a Soviet NKVD Regiment.


The Germans have 2 x understrength companies (platoons of 2 x squads each) with which to seize all of the buildings around Tula including the Brickworks (we used the Stalingrad Barrikady Foundry from Novus).

By the way, I have an under-strength NKVD company sized blocking detachment with some extra HMGs, Anti Tank rifles, and I'm supposed to have snipers and a pair of deadly 85mm AA guns but didn't want to figure out how to model those so I just used the infantry, ATRs, and HMGs.  I have no mortars or artillery.  Per the HtD scenario book, I should also have some fortifications as well as a huge log pile to slow down Fritz.

Using the Hit the Dirt timeclock, the Germans are to step off at 1300 hours and seize the buildings no later than 1700 hours.  The timeclock advances 30 minutes when a "5+" is rolled on a 1D6.  You roll to advance the clock every time the initiative switches to the Soviets.  I think we ended the game somewhere around 1530 hours. 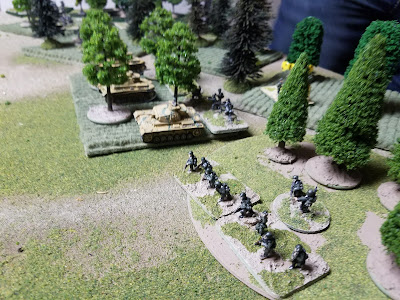 The Germans start shooting the near side of Tula with a heavy weapons platoon which Alex had as part of his MTOE.  2 HMG sections and their very own Platoon Leader.  It's a great idea and works very well suppressing the Soviets in the worker's cabins.

The Soviets (me) could have made some smarter deployment decisions IE not using your Company Commander to hold a flank down, keeping platoon leaders closer and more centralized so you can mass fires better.  The Soviets suffered from very sporadic and ineffective shooting throughout the game and I dont think ever actually knocked out a German squad.

It's about as a-historical as could be, but that's because of the commanders decisions, not the rules!  in real life the Germans had to pull back from Tula and wait for the ground to freeze so they could bring in more tanks! 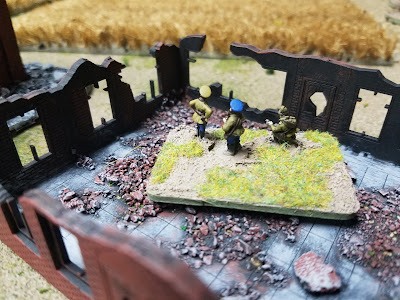 I also had a SMG platoon attached which I used my scouts for.  These guys are deadly in close combat, provided they get into close combat.  They are terrible for holding ground though, and would have been much better suited to counter-attacking or city fighting with Crossfire's building sector rules.  Dave and Alex knew that I only could use 2 dice at range with them in the open.  So they carefully maneuvered against them and then formed a massive company-sized crossfire against them, systematically eliminating stands one by one.

It's a good plan and it's also gratifying to see the rules "clicking" with these guys!  This was Alex's second game, and Dave's first after a long hiatus. 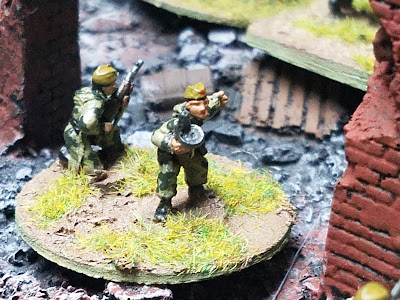 I also experienced the infuriatingly disappointing Soviet Anti Tank rifle which would have needed "boxcars" to hit and kill the Panzer III to its front.  Things arent going well and the Kommissar is glaring at me with his hand on his pistol! 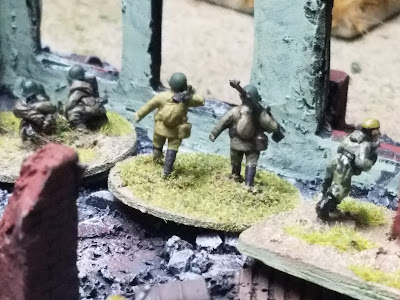 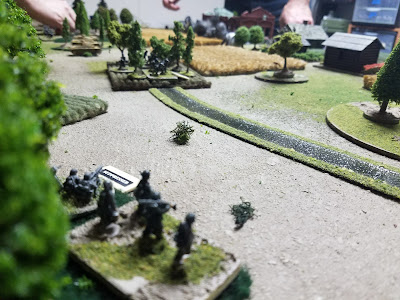 Dave moves his company forward to surround and flank the brickworks while my SMG gunners can only watch.  1 die to shoot is too risky for me and they might go "NO FIRE" so I dont even bother, instead hoping they'll close-assault the brickworks outright.  They dont!

The Germans take out squads one after the other until the building is clear of SMG stands, they then close assault the suppressed HMG stand and ATR stand.  It's brutal combat! 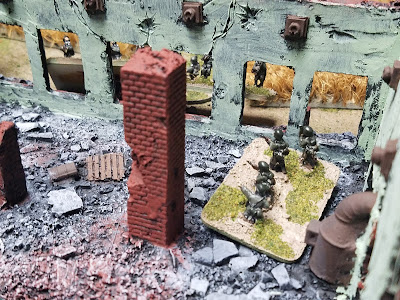 Dave and Alex saved their last heavy artillery mission for the house that's hiding my reserve platoon.  It's devastating and they score a kill, meaning up to 3 additional squads in the house are suppressed.  I call the game! 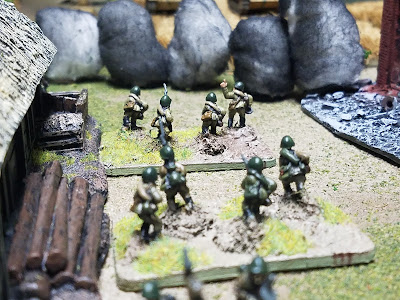 Second week in a row of Crossfire and another game that took a little bit more than 2 hours to complete.  Not bad considering there were 3 x infantry companies on the table, a platoon of armor, and artillery in support.  Alex and Dave got the hang of things quickly and while we had to search for some rules, most turns we didn't even have to consult the QRS.  This was a great, albeit costly, game for me and I have to be honest about some lessons I re-learned:

Company / Battalion Commander Placement
Both sides struggled with the placement of company / battalion commanders.  The CO needs to be in a position where he can see things, and coordinate crossfires from multiple platoons.  The key to victory in Crossfire is coordinating Crossfires with support teams and with multiple platoons, giving you the best chance to kill something.

In my case, I needed my CO centrally located to coordinate counter-attacks, and fire into important kill zones.

Coordinated Defense
Units' fire needs to be tied into a larger defensive scheme.  An HMG is a powerful weapon but it's not as effective unless it's tied into a platoon network of linked fires.  (gosh if this doens't sound "real world" I dont know what is).

SMG Units
These powerful units are best kept in reserve where they can be employed in counterattacking, preferably with an HMG to "soften up" defenders prior to going in.  They are very powerful if used correctly and took an entire company to "winkle" them out of position.

All in all a great game with great company, and a great time after a long week at work.  Once again, Crossfire deliver everything it promised and all in less than 3 hours.

Posted by Disgruntled Fusilier at 9:03 AM