The Fight at Ulianovo: ENOUGH ALREADY!

At what time does a blog post/topic become Spam?  I'll quietly let you be the judge of that and continue on with the latest developments at Ulianovo in 1943 during Operation Kutuzov!

Start here if you're just tuning in.  The rest of you must suffer along with this topic as I develop the "perfect" scenario, originally based on the Skirmish Campaigns "Red Recon" scenario from the "Red Guards at Kursk" book.  I'm happy to report after game #7 (!) that we're getting close.

Saturday morning I was up with the chickens to try the whole thing out with Battlegroup: Kursk.  Surprisingly, a company-sized infantry-only force with heavy weapons (mortars and MGs) was still only about 350 points with a morale rating of 28/29.  I would play the game on and off throughout the day and it delivered all the flying-lead, mortar exploding action that Battlegroup offers.

I did not thoroughly document the Battlegroup game because I was only playing to see how it would go and if the outcome would be any different than the 6 Flames of War games I had played previously.

Bottom Line - it wasn't - *however* the game was an intense nail biter that went all the way to the end.  The Soviets and the Germans were both 1 point away from their breakpoints and the Soviets drew a "4" ending the game in the Germans' favor.  The casualties were horrendous - at least 5 to 1 for every Soviet to German knocked out.  Sov's started with  a 3 x platoon company and the Germans a 2 x platoon company.  Both sides had mortars and heavy weapons.

The defining characteristic of the Battlegroup game that makes it significantly different from FoW?  TIME!  Roughly the same number of infantry stands on the table equated to about 2 x more hours of game time.  You'll have that when you're shooting with individual figures and rolling for 1. observation, 2. to-hit, 3. save, and 4. morale!  Nothing against Battlegroup - it was a ton of fun, but it wasn't the convention game experience I was looking for yet.

Anyways later in the day I reset (Again!) and tried out ANOTHER formula for the Soviets.  I was using "expensive" troops IE Scouts and the Storm Group, which are the best quality units the Soviets have for the 1942-43 time period.  This time I tried a FULL Battalion of "Hero Rifle Companies" and a "Hero SMG" Company.  4 total companies of troops, with battalion command and mortars.

I made the mission a bit closer to the "No Retreat" mission in the FOW Rulebook (more on that later) and pushed the German positions back a bit further.  Once again, German platoons are quite large - 9 teams each, with 2 x HMG sections each.  THey also have mortars on the table.  A load of firepower.
THe Soviet plan is to overwhelm the German trenches from each side and flank the position.  The second German platoon is in reserve per the mission rules.  I like that as it gives the Russians a fighting chance before those trenches get filled in with people.

The Soviet attack is making good progress.  The Germans are firing furiously into them, with the HMGs on the flanks, the riflemen are taking care of the Soviets in the center.  With 4 total companies on the table, there is no shortage of targets! 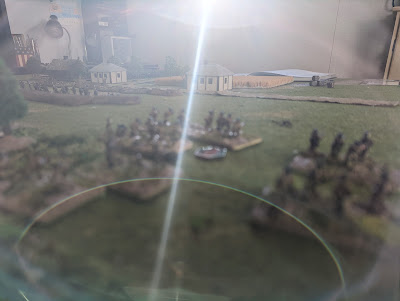 The Germans did not receive their reinforcements until turn 3, which means they wouldn't engage until turn 4 or 5.  This helped the Soviets get as far as they did.  Flooding both flanks, along with a frontal attack was the turn call, as it turns out.  Both sides have an even 35 points, by the way.

The shooting goes the Germans' way at the white house, and a brutal counter attack eventually wipes out the advancing Russians.  The white house is secure again. 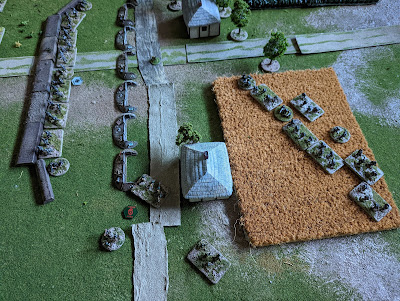 On the Soviet left however the joint Rifle and SMG companies are continuing to advance even amidst being pinned then unpinning.  The fight is now heating up on the left! 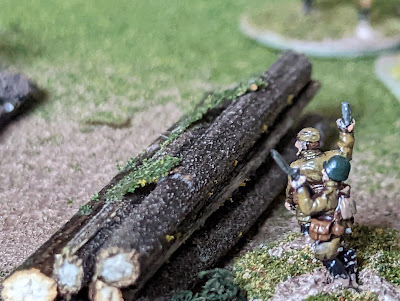 Well we're getting closer.  The 4 x company option of troops was much better for the Soviets than the expensive "Storm Group" which cant afford to take casualties.  The mortars were great, too, because they enabled the pinning of the first German platoon in the trenches, which had multiple mortar strikes against it go off because of the "REPEAT" rule.  This allowed the Soviet center company in the open to advance as far as it did.  Following the NO RETREAT mission in the rules, the Soviets also got a single minefield which was fun positioning the Red ARmy troopers around it so as not to blow themselves up.

The German reinforcing platoon coming up later also was a nice touch and I think, rather than roll for it, just have it come in automatically on turn 3 giving the Russians a bit more of a fighting chance (not much, mind you, ALOT had to come together for those SMG'ers to destroy the HQs)

Adding an additional SMG company might throw the game off a bit too much.  The other option is to *actually* handicap the Germans at 7 x stand platoons with only a single HMG, or limit the entire force to 2 x HMGs and have them both start on the table.  This gives the Soviets a 4 x point advantage.

THis has been an incredibly fun and satisfying exercise, and I think I'm getting alot closer to a playable game where both sides could, reasonably win, even with the trenches.  I will also likely move the German defenses up a bit further where they were for the last 6 games.

We're looking at one or 2 more games of Ulianovo before I'm willing to call it done, but it's been a blast so far.

A few more tweaks and I should be ready to publish this and playtest it with my group if they're willing to play.

Also I'm much looking forward to trying the new Perry Bro's rules "Valour & Fortitude" (it kills me to write "valor" like that :) but after Norm's outstanding review, I'm not sure how I can afford NOT to play them.

Posted by Disgruntled Fusilier at 2:10 PM