I can't think of a better way to cap off an epic day Saturday of Napoleonic gaming than with a rules set that captures a truly epic scale of Napoleonic command.

We played our first game of "Et Sans Resultat" a set of rules aimed squarely at Army and Corps level command.  Aside from getting into a lengthy rules discussion here, I will say that ESR delivers on its promises fully.  You have never felt or experienced the problems of commanding a Napoleonic Army as you will in this game.  You have my word.

Now onto the ESR game.  I stayed on my side of the table (closer to the donuts) and Dave stayed as the French.  We kept the terrain the same but the missions changed.  I needed to breakthrough and capture, what I thought was a road leading to a Danube River crossing site, when in actuality I was supposed to capture the crossing site itself!  Oh sh**.  that courier we just sent to Archduke Charles?  Get him back here......

The first thing I'll say is the table really looks like a Napoleonic battlefield.  Large, ponderous columns of infantry marching up to the battle area. 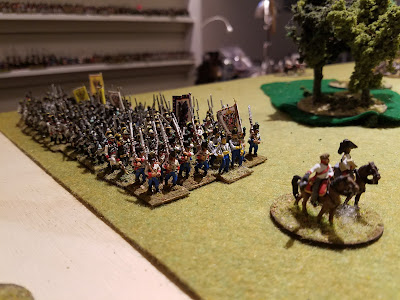 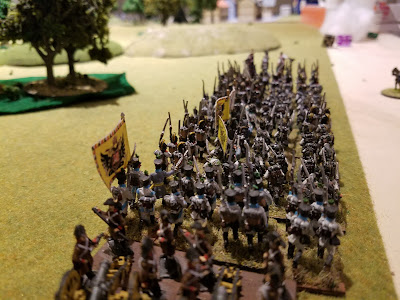 Your job is to figure out what orders you want to give your forces, in light of a greater, over-arching geographical objective.  Then your columns move out "ployed" (opposite of deployed) and you have to roll to see how many of your battalions can deploy out of line when you need them to.  Huge decision points here, folks and lots to think about in terms of how and when you want to deploy divisions for the upcoming close fight.

At this point, given the proximity of the French, I spend a fatigue point (more on this later) and decide on deploying here to fight.  My cavalry will end up keeping their orders and move straight into the French without as much as a second thought.  This would result in the utter destruction of my Cavalry division!  All due to a poor decision on my part to keep their orders. 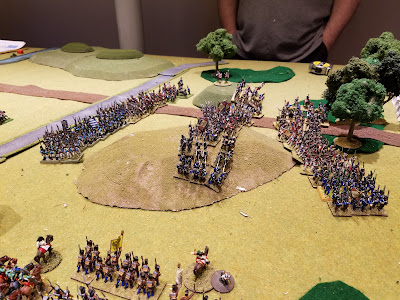 Units coming out of their divisions have to "shake out" as best they can when they deploy in order to maximize the Division's frontage as well as maintain units to support them.  It's a balancing act to control all these units! 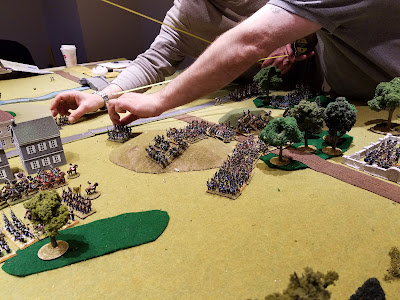 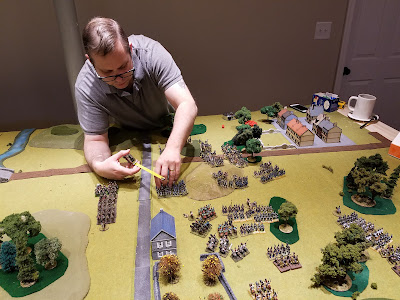 The one thing I'll say, is this game is about the movement and fighting of Armies, and the table looks like a painting of a Napoleonic battle, with swirling masses of infantry and cavalry locked in combat! 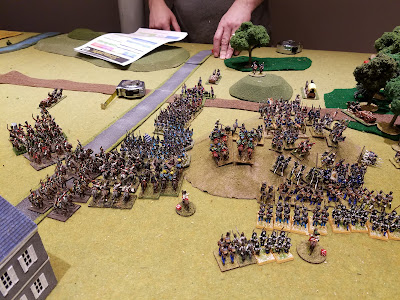 Fatigue at this point is killing my formations and for every battle I get engaged in, the sheer amount of fatigue points is ensuring I pay dearly for losing a fight.  You really must manage your fatigue points or else they will get out of control and you'll end up paying dearly, if an "assessment" is forced upon you.  Think of assessments like morale checks, where multiple factors are taken into consideration and applied against a die roll.  In some instances, fatigues are multiplied during assessments, so the more you have, the worse it can get for your units.

So you can see how decisions led to the destruction of my Austrian Cavalry, and we're in the process of losing another Austrian division! 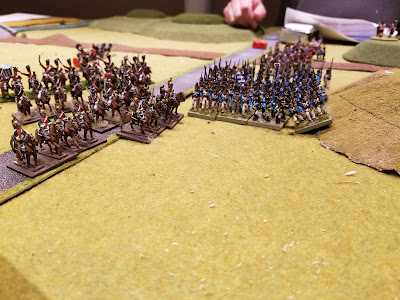 Thoughts on ESR:
So as you may have been able to tell, this is a game concerned with the movement and placement of divisions, placing you in the shoes of the Army's commander.  True, you're maneuvering battalions around, but the placement, deployment, arrival, and management of your divisions is crucial.  Think of the Battalions as components of the larger force.  You also have to shepherd your resources and manage fatigue points as they become very devastating after awhile.

Deployment of infantry is very important as is the decision when to deploy and how to deploy.  Placing your guns is a special action made by the division commander, which I love, and combat is handled in a very effective and streamlined way (think about it this way, the combat sequence is not really the star of the show like in so many other game systems, it's just another component of the bigger system).

In ESR, I believe you are really punished for bad decisions, as I certainly was in this game!  I believe ESR is a simulation where you can really match wits and ply your trade as a general.

You can read more about ESR from the Wargaming Company's Website.

Posted by Disgruntled Fusilier at 5:42 PM