I actually had a little bit of time this evening after the kiddos went to sleep so I gave Norm's "Tigers at Minsk" a shot (no pun intended).

The game was played using standard Crossfire platoons of 3 German squads and 4 Soviet squads.  Each side had an HMG stand and the Soviets had a T-70 light tank!  (Germans 4 units, Soviets 6 units).

The game starts at 0800 hours.  It's mid summer, 1943.  Think of this as a probing action somewhere on the Kursk battlefields.

The Soviet attack was slow to develop, particularly because most of the time they had a squad or 2 that was out of command and not moving.  I marked them with little yellow beads.  The cornfield and the small hamlet would become the scene of some vicious firefights once the Soviets closed the range.

One of the big questions you have to ask yourself is "do I really want to shoot overwatch?"  It takes an action to lose an overwatch marker so it may not be worth it!  I like that you can't always do what you want to do.

One interesting thing is that this game units move cautiously and slowly unless on a road and in all cases, only move more than 1 hex if they are not observed by the enemy.  So the game is taking place after the committal of combat units in the operation.

Anyways I keep placing the command emphasis on my Soviet squads to get up into cover in order to fire on the Germans.
So at the turn's end, you roll to see how far the clock advances.  This is a super cool feature that adds some character and flavor to the game and gives you a perspective to how the battle unfolds.  It also ensures a random number of turns played.  Some turns the clock only advanced 4 minutes, in others, 12 minutes.


The Soviets start to advance (and I start to get a better hang of the rules) and move against the hamlet.  They also dangerously stack up in a hex but since it offers some cover, it offsets the advantage...sort of.  There is a German squad in the hamlet now and it attracts the attention of every Soviet squad nearby, who shoot it to pieces, eventually breaking it.

Another cool feature I'll mention here are the morale rules.  For every 2 combat units, you count 1 morale point.  Your total number of morale points acts as a break point of sorts.  The Germans had 4 units, the Soviets had 6.  German breakpoint is 2 and Soviet is 3.  Once you reach breakpoint, every unit on the table takes a morale check and could bug out. 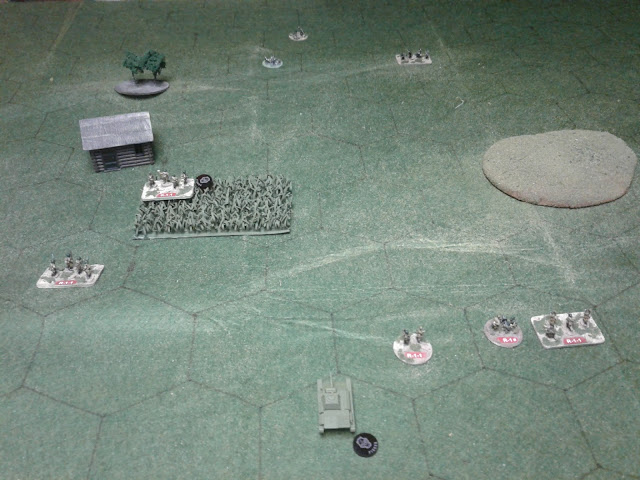 At this point, the Soviet HMG gets to work and starts hammering away at the Germans in the open.  The plan works and the Soviets, after seizing the hamlet, start using their base of fire to kill Germans.  It's a solid plan and it pays off.


So I ended tonight's game when the 2nd German squad was KIA.  I didn't make my morale checks since I had some other stuff to do but I did get a good feel for the game and also had a fun time actually getting to put the rules to work.

A few observations:
I played the game on my large hexmat and probably played over a larger distance of hexes than was originally intended so it took awhile for the combatants to get to grips.  (maybe 8 x 8 or 8x9)

Fire is subtle but effective and you can suppress with a stationary element while advancing with another.  That's the gold standard in terms of low level tactical rules as far as I'm concerned.

Armor's movement is as fast as the infantry, representing the level at which we're fighting here.  I wanted my tanks to move faster than that, but what for?  Their job was to support the infantry.

i like the variable line of sight rules for scrub (but had some questions about it).  Same with the "equipment breakdown/out of ammo" rules for HMGs.

The random events table really adds some nice flavor to the game, and gives you some additional character.

Some questions I had during play:


Besides these questions, the game move pretty quickly.  Here's an idea of how the time clock advanced.  Note how the action speeds up and slows down and you can almost imagine the platoon leaders checking their watches constantly during the battle.

This game took me awhile to play because I was "flipping" through the rules on my tablet trying to look things up.  I will say that most of my questions were answered and my next game will likely go faster.  I'd like to play with artillery and more vehicles on each side.

First game was lots of fun.  Looking forward to more Tigers at Minsk!  I definitely need more terrain on the table also.

Posted by Disgruntled Fusilier at 9:40 PM