Continuing on with my AWI kick of late, I had some precious "free" time recently and decided to try out some of my ideas for the Germantown 1777 MEGAGAME.

This is really in 2 x parts with the first taken up by putting the miniatures on the table and "having a go" with the Neil Thomas rules, and the second trying to get a more operational perspective of the battle by playing Decision Games' "Germantown 1777" folio game.


I played the "Late Arrivals" scenario from the 1 Hour Wargames book which sees a constricted attacking force having to punch through a gap in order to seize a town in the SE corner of the map.  The defender has 2 unit come on turn 5 and 10.  It normally makes for a very tense game...so if that doesn't sound like Germantown I dont know what does.

I also used the force selector from the 1HW book so each side had only 6 units.  Where Cavalry would come up, I made that an "elite" Regiment/Battalion instead, granting the unit elite morale.

I did learn an interesting lesson that became apparent as I was moving forward - the Neil Thomas "4 stand" rules are played in centimeters, while the scenarios from "One Hour Wargames" are played in inches.  That sounds innocent enough right?  Well, when the line battalions / regiments move 8 cm's per turn and you only have 15 turns to capture the objective, it makes the game a bit more interesting...Lesson learned.  But we're really here to see how the mechanics and experimental rules go, right?  Noted. 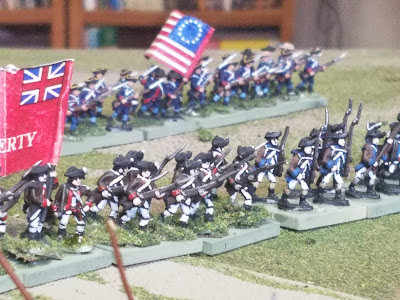 I'm taking my time to close with the British and it was a mistake.  The attack should have gone in quickly instead of waiting for the artillery to come up.  The Continental attack doesn't quite get off the ground until about turn 6 or 7 and by then the British reinforcing line are already forming a second line to reinforce the units in contact.  Worse yet, their artillery is coming up. 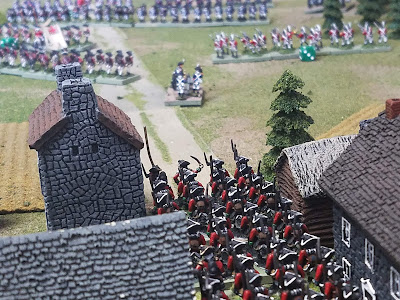 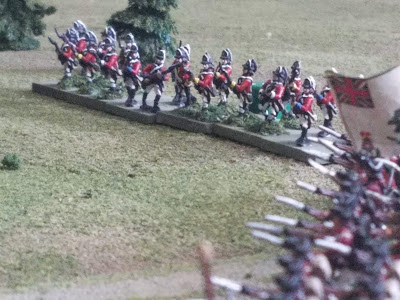 That was a good lesson but the rules tweaks discussed during the previous few weeks worked very well and had a good period feel to it.  I think I will take up Darren's idea for light bobs and have them enjoy a save even in the open since they are trained in making the best use of cover and skirmishing.  It just makes sense.  This was a good practice game with the rules before I try out something a bit larger and with considerably more units.  I learned I need a QRS that has all of the mods on it so I rarely have to look in the book.

Now to scale up a bit, later in the evening I threw down my Decision Games "Germantown 1777" board wargame.  Now this was fun and a real nail biter!  I did NOT finish the game but what I did finish played out VERY historically in that:

Here are some quick snapshots of the battle.  I was referring to the rules too much to take many pictures.

So that's it.  A fun couple games and a nice diversion from the state of the world at the present moment.  I learned a ton for the Germantown game, however more experimentation is needed I'm afraid!  I like the Neil Thomas 4 stand rules for this but will definitely keep all of the period tweaks discussed in this blog and other blogs.  Going to try a variation of "Hold the Line" next and see how that plays.  I hope everyone has a great week.

Posted by Disgruntled Fusilier at 8:41 PM