Tigers at Minsk: The Woods - A 2 x 2 Crossfire Scenario fought with TaM

Readers will remember I posted a scenario idea for "Tigers at Minsk" where I tinkered around with the Dick Bryant "2x2 Crossfire Scenarios" taken from the excellent "Steven's Balagan" blog and site.  Tigers at Minsk and Crossfire are cut from very simliar cloths and are both excellent games in their own right.  I felt the scenarios would be ported over nicely.  I was right.

As a refresher, Steven posted an excellent scenario guide for Crossfire which I posted guidance and thoughts on for converting the Crossfire scenario to a Tigers at Minsk scenario.  I played through "The Woods" twice this afternoon, solo.

(flip back 2 x posts or simply click on the link to see the TaM scenario parameters).  This scenario turned out to be a really good one, and chock full of decisions.  The Germans must clear out the woods.  The Soviets, outmanned, must try to inflict enough casualties on them to stop them.  You respective task organizations follow:


Let's get to the action.


Lots of shooting as the Germans suppress likely enemy positions.  They score a number of pins and I'm thinking this is in the bag for them.  Or is it?

The Germans send forward 1st and 2nd platoons, along with the attached combat engineer squad while the HMG attempts to continuously fire on the Soviets in the woods.  1st platoon sends a squad forward, with the combat engineers trailing a hex behind them.  The base of fire squads of 1st platoon a trying to unpin and sort out their situation, while the maneuver squad gets itself into a jam, finding itself face to face with another Russian squad. 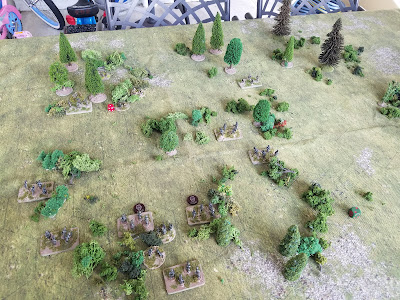 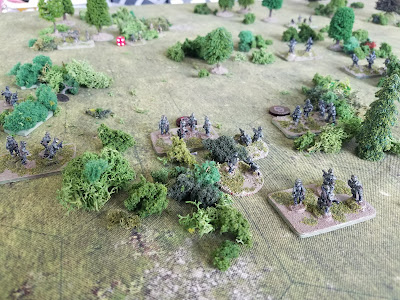 The Soviets counterattack and send a squad forward on their left / German right to block 2nd Platoon.  It works and spooks the squad in contact into opportunity firing.  A great move by the Soviets to slow down the German advance.  The Germans bring up the next squad in 2nd Platoon to support their kamaraden!

Germans on the left start shooting at the Soviets to their front but the fire is ineffective.  Meanwhile, the Germans on the right are either opportunity fired and cant' do anything, or out of command!  The Soviets will assault them! 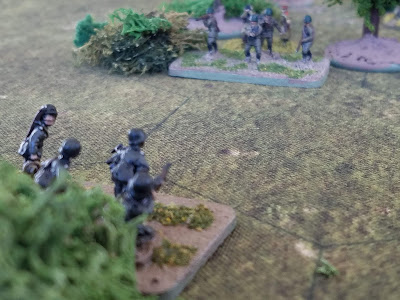 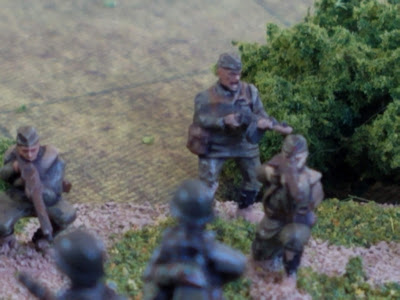 The Germans need to make something happen here.  The Soviets have 2 units broken now and one more will end the game but the Germans cannot seem to bring it home!  The Soviets are fighting cagey here and putting up a hard struggle.  Both the Germans and the Soviets realize they haven't used their indirect fire yet.  The dedicated FOs will call for the larger tubes, and the PCs or CC's will call in for the company mortars.  Not a bad compromise.  I also used the Crossfire fire missions from the scenario, so 4 fire missions each of 81/82mm mortar fire, and 50mm mortar fire for both sides.

This is it!  The Germans have to make something happen.  All firing is focused intently to mass against units to the front.  It was not to be.  The Soviets weather the fire!

This game was full of decision making and required a bit of thought about main and supporting efforts, bases of fire, fire support planning, and gambling.  Plenty of gambing!  The one hour limit really forced the Germans to get a move on, and while the Soviets don't have alot of men, they make up for it with firepower.

I really liked the Crossfire 2 x 2 scenario here and highly recommend it to anyone looking for a fun challenge.  There are numerous questions and problems to solve here both as the Germans and as the Soviets.  Do you defend forward?  or Do you take advantage of the open areas and force the opponent to come to you through kill zones?

I felt that I needed to try the game again and set up a bit differently than last time, with the German second platoon much further away than the first platoon.  Let's see how that plays!

German second platoon works its way up the right flank and is caught by a Soviet HMG and squad and unfortunately is "target rich" the Soviet shoot up their hex and both German squads are pinned!  Meanwhile teh Soviets eliminate the first squad from second platoon! 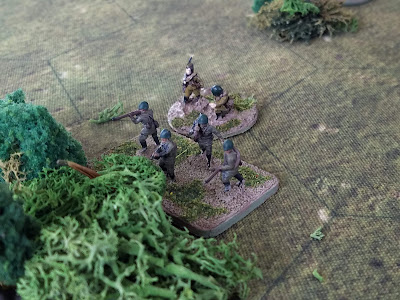 The loss of the German squad on the right has the men reeling!  The Soviets already have a unit knocked out.  Time to earn a few more!

German fire is furious from 1st Platoon and the Soviets lose another squad.  Soviet return fire is ineffective and the Germans from the previous turn rallied both squads in 2nd platoon on the right.  it's time to resume the advance!

The game ends at the top of the German turn as they knock out another Soviet squad, ending the game. 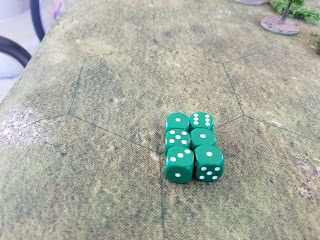 So, how did this little experiment go?  Did the Crossfire scenario work out for Tigers at Minsk?  Absolutely - and quite well!  I was a bit afraid that the 2:1 advantage would be too unbalanced, but the Soviets can stay in the game if they play cagey enough, and the extra mortar fire missions really help.

The games featured crazy reversals of fortune and it's interesting to see how things change dramatically with slightly altered deployments.  This gaming was alot of fun and I think with a human opponent it would be even more so.

I really liked the multiple fire missions and I dont think it was too powerful or harsh, especially since both sides had equal fire missions.  I feel like this would be a good introductory scenario for someone wanting to play Tigers at Minsk that incorporated indirect fire, multiple platoon actions and a bit more responsibility and management.  You really have to move in this scenario as the clock is ticking and 8 or 9 hexes are a long distance to travel under mortar and machine gun fire!

Next step is to play some of the other scenarios in the Balagan "Dick Bryant 2 x 2 Crossfire" scenario pack and see how those go.
Posted by Disgruntled Fusilier at 4:26 PM